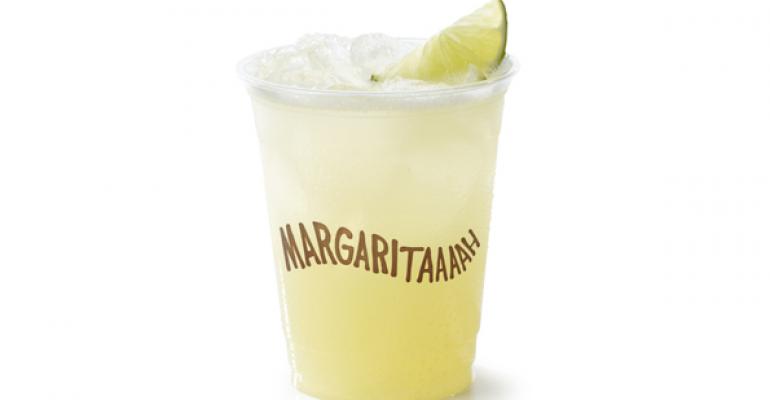 After reporting a 22-percent increase in first-quarter net income, Chipotle Mexican Grill said Thursday it will debut a new Patrón margarita made with premium tequila and fresh juices at most of its restaurants later this month.

While the Denver-based chain has long offered beer and margaritas made with a mix in some locations nationally, the new version will feature made-to-order cocktails made with Patrón Silver tequila, blended with Triple Sec, fresh lime and lemon juices and organic agave nectar, and served on the rocks, the company said.

Priced between $6.50 and $8, depending on location, the cocktail will be available at about 900 of the chain’s 1,458 restaurants starting April 29, in time for Cinco de Mayo.

The chain’s existing margarita, made with Sauza tequila, will remain on the menu as a house option at a lower price, which varies by market, the company said. The Sauza version will also be made with the same fresh-juice-based recipe.

“Most people are not aware, but we have served margaritas at Chipotle from the beginning,” said Mark Crumpacker, Chipotle’s chief marketing officer, in a statement. “Previously, however, they were made using a margarita mix and we didn’t feel they were as delicious as they could be. Our new margarita recipe eliminates the mix in favor of a few simple ingredients.”

Though margaritas are not new at fast-casual Mexican chains, Chipotle is among the first to partner with a premium tequila brand.

At the 636-unit Qdoba Mexican Grill, based in Denver but owned by San Diego-based Jack in the Box Inc., company locations only offer beer, though some franchisees may offer margaritas, said spokeswoman Megan Wallace.

Chipotle’s net income for the March 31-ended quarter was $76.6 million, or $2.45 per share, compared with $62.7 million, or $1.97 per share, a year ago, despite higher commodity costs — particularly on ingredients for salsa, dairy and chicken — though avocado costs declined.

Revenue for the quarter was $726.8 million, an increase of 13.4 percent from the prior year.

Same-store sales rose 1 percent, driven primarily by traffic, but the company said it was offset by a loss of trading days in the quarter compared to early 2012.

The company reiterated its outlook for the year, saying same-store sales would likely be flat to a low-single-digit increase. Between 165 to 180 new restaurants are expected to open in 2013.