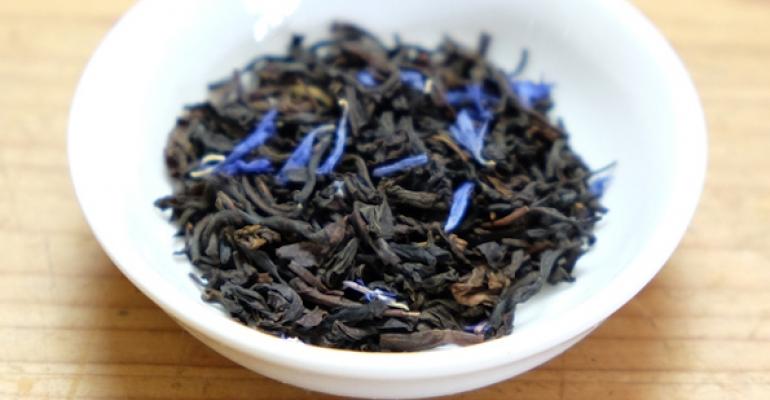 <p>Chefs are cooking more with teas, and earl grey, picture above, is being used for diverse items such as pork belly, chocolate mousse and grits. </p>
Menu>Beverage Trends

Chefs make use of tea as ingredient

Tea consumption in the U.S. has been rising steadily, driven in no small part by consumers’ embrace of the iced version as their year-round beverage of choice. In fact, the Tea Association of the USA reports that a whopping 85% of tea consumed in America is served over ice. At the same time, the association indicates that the hot tea category has also been on the upswing. While this overall growth largely reflects the perception of tea as a healthful beverage alternative, its increasing use in foodservice as an ingredient owes more to its versatility both in the kitchen and at the bar.

Earl Grey is making headway on menus. The tea derives its distinctive flavor from the oil of the bergamot orange, which lends subtle character to a range of dishes. At Alden & Harlow in Cambridge, Mass., for example, it has been used to cure crispy Berkshire pork belly served with cold-smoked grits. The tea’s citrusy notes also account for its appearance on dessert menus. Foundation Social Eatery in suburban Atlanta has featured Earl Grey-scented chocolate mousse, and Semilla in Brooklyn, N.Y., has offered rhubarb with Earl Grey ice cream as the final course of its tasting menu.

This presents an opportunity that Chicago chefs are busily exploiting, as the city seems awash in tea-accented food and beverage innovation. Imperial Lamian, which touts its modern Chinese cuisine and artisanal cocktails, delivers on that promise with Jasmine Tea Smoked Ribs on the food menu and Dynasty Tea Time with chamomile vodka and lemon sour on the beverage list. Chamomile also pops up on the American-Mediterranean menu at nearby Ada Street, where the buttermilk panna cotta is finished with chamomile caramel. Waffles Cafe creates green tea waffles from matcha green tea powder topped with lemon-ginger cream and ground pistachio; those flavors are reworked in the green tea Wonut, the operation’s popular signature waffle-doughnut hybrid. Michelin-starred Sixteen focuses on local ingredients, and its current four-course menu concludes with a seasonal elderflower/raspberry/black tea dessert.

Argo Tea, a 40-unit chain headquartered in Chicago, has really gone to town on tea-based beverages. The permanent menu includes Teappuccinos like Earl Grey Vanilla Crème, bubble teas like Black Tea Coconut with gluten-free coconut pearls and take-offs on classic cocktails like MojiTea, Jasmine TeaMosa and Hibiscus Tea Sangria. The operation has also jumped on the cold-brew bandwagon sweeping the coffee segment with its recent introduction of Cold Brewed Single Estate Teas, and it even addresses the smoothie trend with Pom Berry SmooTea.

Sweet tea is a popular brine. Our national love affair with iced tea has deep roots in the South, where the regional favorite is invariably served sweet and consumed from morning to night, regardless of the season. Southern chefs take advantage of this deep connection on their menus, as with items such as the sweet tea pork chop at Nashville’s Pinewood Social that is served with avocado purée and salsa verde. The southern fried chicken at Mystic Grill in Covington, Ga., is sweet-tea brined and plated with buttermilk mash and andouille red-eye gravy. By contrast, Paul Bunyan’s sweet tea brined chicken at Denver-based Punch Bowl Social consists of roasted free-range chicken served with a salad made with kale, tangerine, tarragon and candied walnuts.

Chains are less likely to use tea in cooking. Many have been busy spiffing up their beverage bills of fare, though, as with TGI Fridays, which menus freshly brewed specialties like strawberry passion fruit tea made with black tea, strawberries, organic agave and lime juice. And the Coffee Bean and Tea Leaf innovates with hot-weather thirst quenchers like Mucho Mango Fru-Tea and Iced Tea Latte with choice of chocolate or vanilla flavorings.