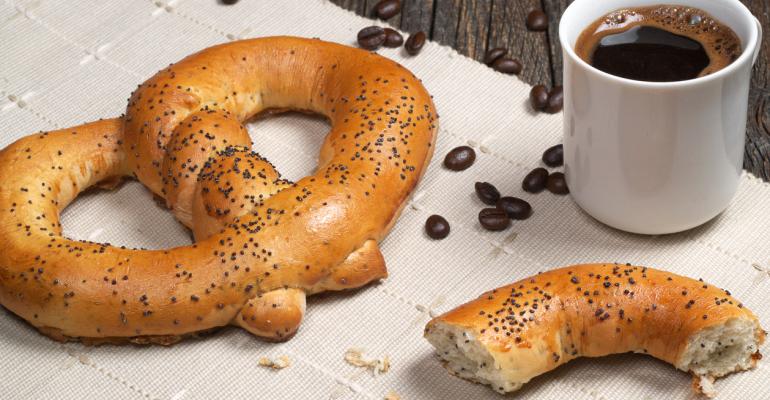 Whether it’s a small plate of killer Buffalo wings, a petite pot roast slider or a flavorful frappé blended with coffee and cookie pieces, a snack is an attractive thing on a restaurant menu today.

America is a nation of snackers, with consumers replacing or supplementing the three traditional meals with smaller portions of food or beverage whenever the mood strikes. Snacking has been on the rise since 2012, but it has grown especially briskly over the last two years, according to Technomic. The market research firm reports that 83 percent of consumers are snacking daily in 2016, up from 76 percent in 2014. Credit that to increasingly hectic lifestyles, the growth of smaller households and the changing view of snacking as a healthful practice.

Keeping up with the changing snacking behavior of demographic groups is a vital task for operators. In recent years the definition of snacking has broadened to include beverages as well as munchies. Cold beverages, in fact, are popular snacks across generational lines. In a recent survey the Hartman Group, a market research firm, asked consumers in the Generation Z, millennial and Generation X/baby boom groups to pick their most recent snack from a list of snack types. Among all generations “salty snack” and “sweet snack” were the two most popular types. However, right behind in third place was “cold beverage.” In fact, for all age groups, "cold beverage” was a more popular snack than "granola, cereal, protein bar,” which ranked fourth, “fruit,” which ranked fifth, and “yogurt,” which ranked sixth.

The vast postwar baby boom generation may be approaching retirement, if not already there, but its snack appetite is still strong. In fact, boomers are tops in ready-to-eat snacks, totaling about 90.4 billion “eatings,” or consumption occasions, per year, 20 percent higher than millennials, reports the NPD Group, a global information company.

In their coffee appreciation, boomers have advanced from commodity-grade beans to more select specialty coffees, says Scott Svihula, owner of Hula Consulting, an Orlando, Florida-based tea and coffee consultancy. But as they age and become more health conscious, boomers also may be interested in beverages with less caffeine, such as herbal tea blends billed as “relaxation” teas. They may also have a yen for pu-erh tea and masala chai, which have the robustness they associate with coffee.

The millennials, roughly in the 18-to-35 age range, have surpassed the boomers to become the nation’s largest generation, more than 75 million strong. They are known for their eagerness to experience global flavors and their trendsetting influence on other age groups.

The millennials are also the generation most burdened with college education debt, points out Svihula. “They don’t have much disposable income for world travel, so they are using their buying power in food and beverage to explore cultures,” he says. Sampling “origin authentic” beverages sourced around the globe satisfies their need for unique experiences.

At Breakfast Republic, the Caffeine Overdose flight caters to the millennials’ urge for discovery. It offers three 4-ounce pours of latte, mocha and Mexican mocha. “Instead of having a single coffee, it’s more fun to try three different ones,” says Engman.

This spring Dairy Queen launched the Hardest Working Happy Hour on weekdays between the hours of 2 and 5 p.m., featuring iced coffee, Ultimate Frappés and premium fruit smoothies. The Minneapolis-based chain added Pretzel Sticks with Zesty Queso during Happy Hour this fall. The program is helping Dairy Queen get established in the crowded coffee market and gain a better footing in snacking, reports Barry Westrum, executive vice president of marketing for International Dairy Queen.

Although the core audience for DQ’s Happy Hour is time-pressed millennial moms who seek an afternoon pick-me-up with superior taste, it also attracts older and younger consumers.

"The wonderful thing about the millennials is that they set the tone and the trends that apply to all of us,” says Westrum. “Millennials snack more, and suddenly so do Gen Xers, Gen Zers and boomers.”

Generation Z consumers, now in their tween and teen years, are destined to be future trendsetters. For their palates tea companies are developing caffeine-free herbal tea products with fruit and root beer flavors, Svihula says.

Westrum credits Starbucks Coffee with popularizing coffee shops as gathering places for teens, as well as the notion of beverages as snacks. “That’s what a lot of the category is capitalizing on now,” he says. “It’s a great way to court those younger folks.”