/sites/all/themes/penton_subtheme_nrn/images/logos/footer.png
Recent
Recent
Panera experiments with robots
Dec 02, 2022
The Recipe of Success: What you can learn from James Corden
Dec 02, 2022
Quiznos parent company appoints Vanessa Fox as company’s first chief development officer
Dec 02, 2022
The third-largest pizza chain is ready for a war
Dec 02, 2022
DoorDash’s layoffs are not a time to panic: they’re a time to rethink the delivery industry
Dec 01, 2022
Featured
How 21 restaurant companies performed in their most recent quarters
Nov 22, 2022
How eco-friendly Seattle restaurant chain Just Poke is doubling in size in 2022
Nov 17, 2022
In the Mix this week: White Castle’s culture, a CREATE recap, Denver’s restaurant scene and more
Oct 27, 2022
How this emerging brand is planning on nearly quadrupling in size in just one year
Oct 21, 2022
Menu>Beverage Trends 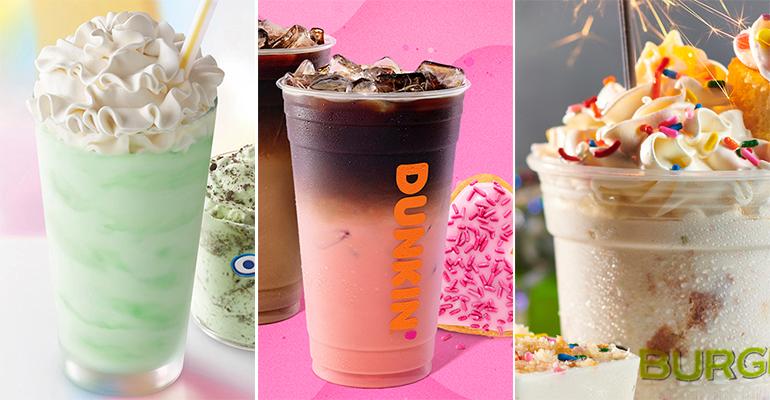 McDonald’s Shamrock Shake has returned to celebrate St. Patrick’s Day for the 51st year, and it’s joined by a minty McFlurry that was introduced a year ago.

Minty shakes are also on offer at Cousins Subs and Freddy’s Frozen Custard and Steakburgers. It might be unfair to say that they’re copying the St. Patrick’s Day classic from the Golden Arches, but Freddy’s treat has Oreo cookie pieces, too.

Meanwhile, BurgerFi is celebrating its 10th birthday with a cake shake, Chevys Fresh Mex is celebrating National Margarita Day, Feb. 22, with the Rosé-A-Rita, and Eggs Up Grill is celebrating brunch with a sparkling rosé Mimosa that will be on offer through Mother’s Day.

Dunkin’ has a red velvet cake drink for February, and so does Slater’s 50/50.

Wow Wow Hawaiian Lemonade, for reasons of its own, has chosen winter as the time to offer drinks with cinnamon and apple.