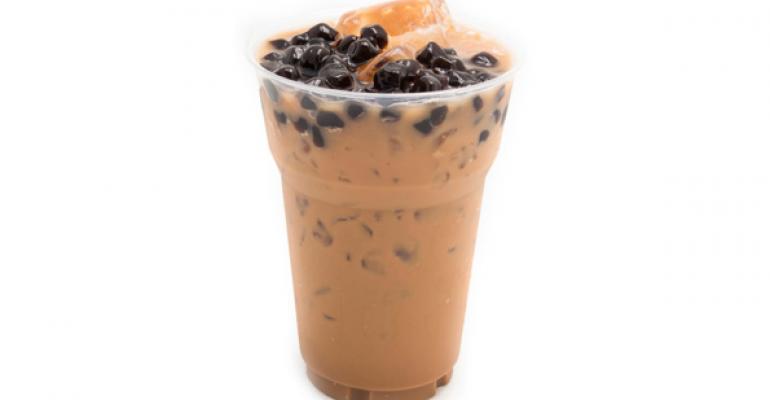 The popular East Asian beverage is gaining attention in the U.S.

One of the next restaurant concepts scheduled to burst onto the scene in Chicago this month is Bee & Tea, a quick-service bubble tea shop.

A popular beverage in China, Taiwan and surrounding areas, bubble tea has been surfacing more in the United States over the past few years, especially in California. It is a common offering in independent Chinese restaurants, but a few chains have started to grow behind bubble tea’s burgeoning popularity, such as Lollicup Coffee & Tea and Tapioca Express.

A recent report in Forbes also found that three concepts based in Taiwan could expand in the United States. Gong Cha and ShareTea each have opened one location in California, while CoCo Fresh Tea & Juice lists 12 locations in New York City and Southern California on its website.

Bee & Tea founder Mandy Calara intends to take a similar approach with bubble tea as he did with self-serve frozen yogurt, having grown his Chicago-based Forever Yogurt chain to 22 locations in five states, as well as two locations in China.

“We’re not the first concept for bubble tea, but it’s been limited to tiny restaurants where [the beverage] is a secondary product,” Calara said. “I’ve watched some of the trends on the West Coast, where it’s becoming popular and there are a couple of franchisors. I want to simplify it a little, make it a little less ethnic and make more people aware of it.”

One important way to make bubble tea more accessible at Bee & Tea is to pair the beverage with another menu item, bao, that lends itself to more familiar, Western flavors, he said. The bao is a steamed bun, often filled with savory ingredients, that is popular in China and not uncommon in Chicago. For instance, the city’s multiconcept operator Lettuce Entertain You Enterprises Inc. operates the seven-unit Wow Bao chain.

“We wanted some food pairings for the bubble tea … to help with the seasonality and to get people to try all of it for the first time,” Calara said. “Again, to not have the concept be so [ethnically Chinese], we can try different versions like a Mexican taco bao, peanut butter and jelly bao or cheeseburger bao.”

For the bubble tea itself, Calara plans to introduce a step-by-step ordering process similar to the self-serve model that is offered at his Forever Yogurt chain. Customers can choose a base of green or black tea, then a choice of different kinds of milk, toppings like the tapioca pearls most common in the beverage, and several kinds of flavored syrups.

“By modifying the menu and simplifying like this — there haven’t been many that have introduced this in a way that isn’t very ethnic,” Calara said. “I’m trying to put this together where it could be seen like an Auntie Anne’s in a shopping mall. The consumer understands what the ingredients are, but then they can customize it the way they want it.”

Teed up for growth

The first Bee & Tea unit is set to open on North Avenue in Chicago’s Wicker Park neighborhood in the next two weeks. A Bee & Tea food truck has already been traversing the city to introduce the concept, Calara said.

He began working on the concept to help him grow out the Chicago market by occupying space very close to his Forever Yogurt shops, or possibly in a co-brand location in the future. The first Bee & Tea will go into a converted location of a competing frozen yogurt brand.

“We were looking for a concept that could slide into a closed coffee shop or frozen yogurt shop, which we’ve seen a lot of in the mom-and-pop or weaker franchise concepts,” he said. “A lot of that infrastructure could be reused. My goal is to have the all-in cost for build-out and conversion total less than $150,000.”

But Calara noted that his diversifying into Bubble Tea is not a hedge against his Forever Yogurt brand slowing down. While he conceded that consolidation in the frozen yogurt segment is likely, he was still bullish on his own brand, due to opportunities to be the first chain in a few markets that don’t yet have a frozen yogurt scene and to co-brand with Bee & Tea or other concepts. A Forever Yogurt franchisee in Illinois recently developed a dual-brand location with WingStop, for instance.

“Consolidation is already happening, but there’s still room for a strong, differentiated competitor to grow,” he said. “If it looks like the economics of each of these Bee & Tea units are strong in closed frozen yogurt shops, we can reach out nationally and put together a package for a beautiful-looking store with very strong equipment costs.”