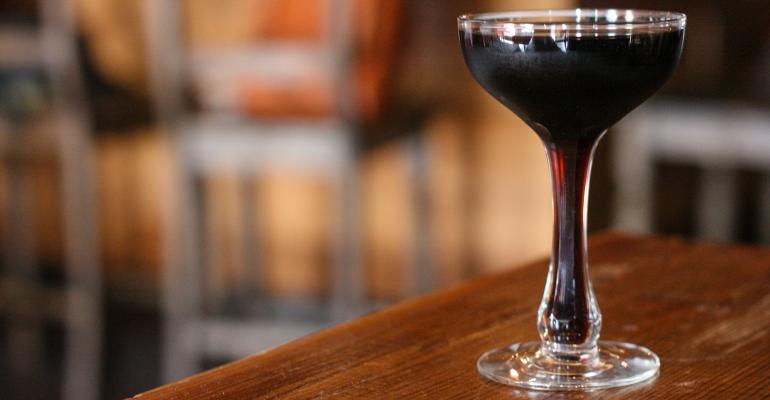 Randolfi’s
At Randolfi’s in St. Louis, Jeffrey Moll draws on a collection of 30 amari to create the Little Black Dress.
Menu>Beverage Trends

Amaro, the bitter liqueur concocted by macerating herbs, spices and fruit in a neutral spirit, has been enjoyed in Europe for hundreds of years. Lately, it has become a ubiquitous ingredient in American cocktails.

“Amaros are a great way to incorporate Italian liquors that have been around for generations,” said Ryan Karten, who oversees the bar menu at Officine Brera in Los Angeles. They can range in flavor “from the sweeter side to super bitter,” he said, and so the category has a wide range of different applications. At the moment, Karten is using Angostura Amaro, which has warm tones of cinnamon and licorice, in a tequila-based drink called Il Sangue de Los Angeles.

It looks like a whimsical tiki drink, but it’s far more complex, with chilled hibiscus tea, lime and agave syrup, as well as the tequila and amaro. It’s garnished with black lava salt and a slice of baked blood orange.

“What makes a cocktail stand out and memorable are the different layers and depth of its flavors, and adding the amaro allows for this cocktail to express a range of fresh notes,” Karten said.

“[Amaros] are good for cocktails because they are not as one-noted as, say, orange liqueur,” Moll said. “They have a big, dominant flavor, [but] when you put them in a cocktail and lengthen them, there are all these nuances.”

Super Coke #2, an amaro-based version of the classic
rum and coke, at AMER in Atlanta. Photo: Dan Durnell
Dan Durnell Moll’s newest menu addition is the Little Black Dress, made with three bitters — Suze, Fernet-Vallet and tiki bitters — and two amaros: Averna Amara and Cynar. He said the drink has big flavors and “looks really pretty in the glass because it’s black.”

Brian Lewis is so smitten with amaro that last April he opened Amer, an amaro- and bitters-focused cocktail bar in Atlanta’s Inman Park neighborhood. At Amer, which means “bitter” in French, nearly all of the 20 or so cocktails feature amaro. Among the signature offerings is Super Coke #2, a nod to the Atlanta-based Coca-Cola Company featuring a housemade amaro blend — a mix of Ciociaro, MY Amaro, Meletti, Cynar, Zucca, Luxardo, Braulio, Campari, Fernet Branca and Montenegro — clarified lime, Coke, orange and cherry.

“[Amaros] are becoming popular because they are so intense, so cleverly put together,” Lewis said. “I love the way it awakens your palate.”

Others mixing amaro into cocktails include Damiano Coren, the newly hired bar manager at Tarallucci e Vino in New York City. Coren, who is a native Italian, has re-imagined the cocktail menu to include three amaro-centric cocktails: Lucky Lucano, made with green apple, lime, Amaro Lucano and mint; Light My Fire, made with warm local apple cider, spiced honey, whiskey and Amaro Montenegro; and Canuck, made with rye, Fernet Branca, smoked maple and sweet vermouth. Some operators, like Elizabeth Parker, bar manager at Centrolina in Washington, D.C., are not only stocking a large selection of amaro, but also are making their own to incorporate into cocktails or to sip on their own as a digestif.

Parker, who is making an amaro for each season, is now featuring her winter recipe, made in mason jars from a high-proof vodka, fennel, thyme, sage, rosemary, mint, cinnamon, star anise, clove, allspice, bay leaf, cardamom and blood orange peels. While Parker prefers to drink her amaro neat with a single ice cube, her favorite amaro-based cocktail is a Black Manhattan, which she makes with amaro instead of sweet vermouth and serves either on the rocks or straight up.

“In the last few years, stronger, boozier cocktails have seen a resurgence of popularity as well as an interest in niche products that really have a sense of place, whether it be geographically, culturally or historically,” Parker said. “Amaro fits right in the intersection of those two demands. There is also huge variation of flavor to be had across the spectrum of amari available so it's fantastic to explore each and every one you can get your hands on.”