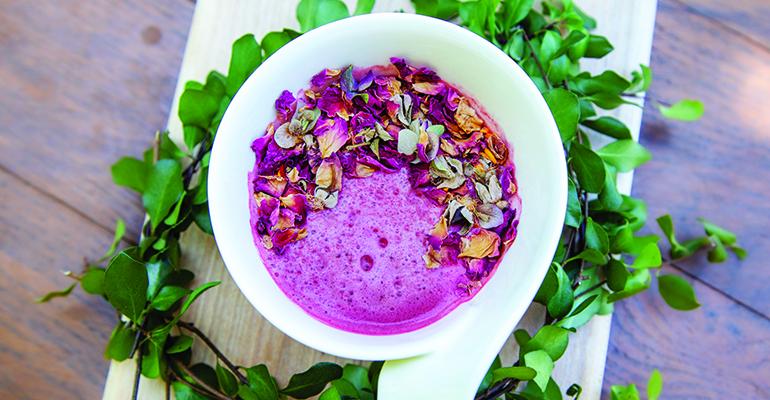 NRN veteran editors outline what will be on restaurant menus next year. Get ready for plant-based meat, functional beverages, low-alcohol cocktails and even more Popeyes chicken sandwich.

Real meat burgers will be pitched as better for the planet

Plant-based concepts may have a growing body of research that supports the idea that eating vegetables in place of meat is better for the planet. But in 2020, we will see the rise of a better-for-the-planet burger — a beef burger — that supports regenerative agriculture. 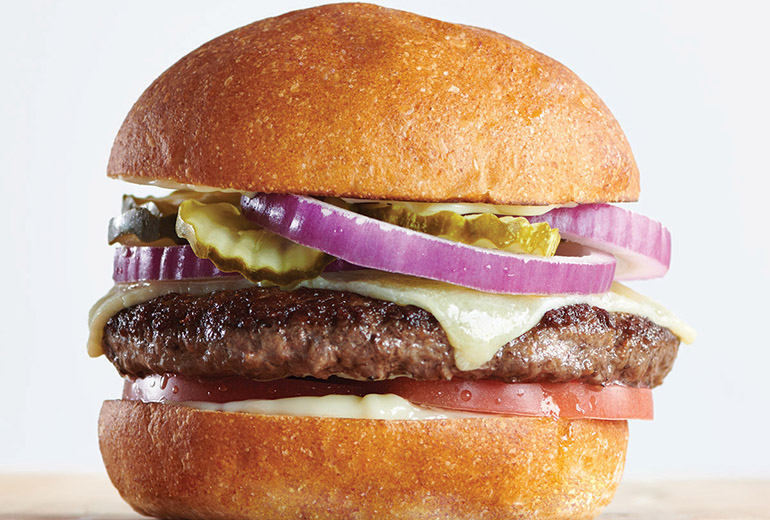 Regenerative practices refer to cattle raised in a way that helps sequester carbon in the soil. Some argue that even methane-belching cows can be carbon neutral if their grazing is well managed, if they eat grass instead of corn and farmers focus more on soil health.

Burgerville, for example, recently introduced at 10 units in the Pacific Northwest the “No. 6 Burger” (left) named for carbon on the elemental table. The burger uses grass-fed and grass-finished beef from Carman Ranch, where cattle graze on a mix of native grasses. Buns are made from local whole-grain flours, and the cheddar comes from a small-batch local cheesemaker using milk from more grass-fed cows. 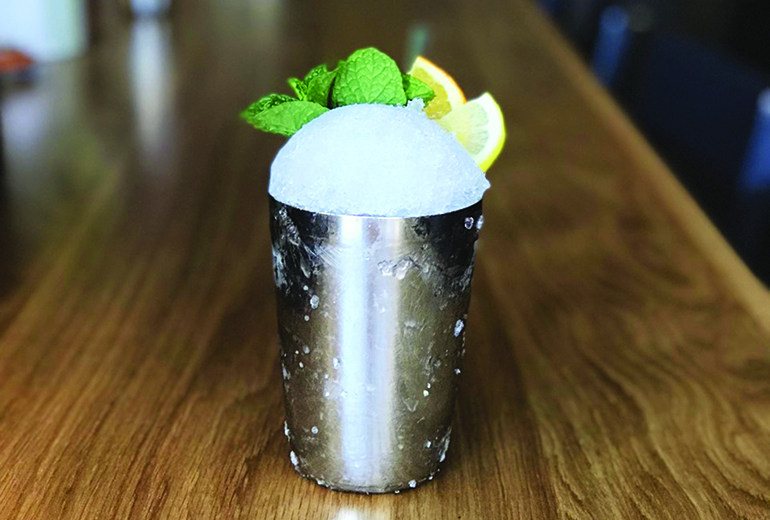 As a follow-up to 2019’s mocktail bar trend, 2020 will be all about the low-proof cocktail. With the rise of alcoholic seltzers like White Claw, drinking has become more about the social aspect and taste of the drink than the booze content. Even if restaurants still offer regular cocktails, many newer and trendier eateries will have multiple drink menus with different price ranges and alcohol content levels.

For example, at Acorn in Denver, the booze-free menu has drinks like house-made ginger beer, and the low-proof cocktail menu has libations like a sherry, St. Germain, blood orange liqueur and pineapple. More traditional cocktails like the restaurant’s version of a Manhattan are still available on the Acorn’s High Booze menu.

Watch for “softer liquors” to become more popular on restaurant menus at independents and chain restaurants alike, and expect liqueurs, sherries and port to become ingredients of choice for the bartender who wants to create low-ABV libations that are just as creative as the harder stuff. 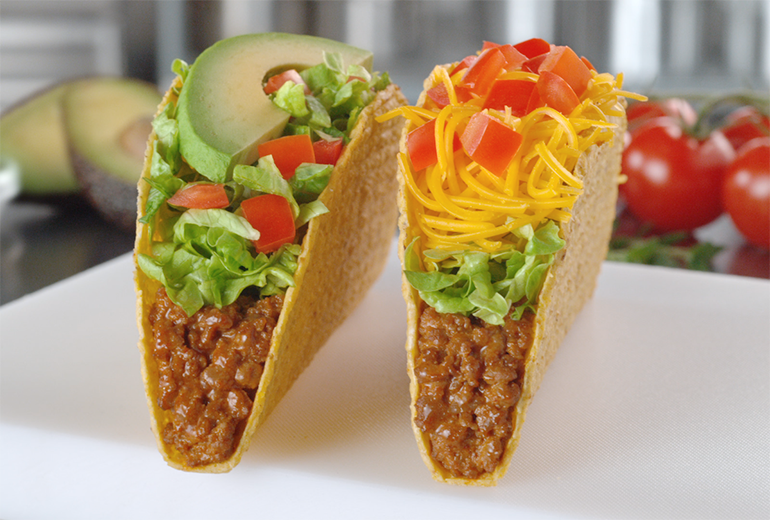 Until now, the vegan meat substitutes that have come to be called plant-based proteins have mostly been used as one-for-one swaps with meat — usually hamburger, but sometimes sausage and occasionally chicken.

In 2020 they’ll be incorporated more broadly into restaurants’ repertoire.

Del Taco got the ball rolling by using its own proprietary spice blend and Beyond Meat’s hamburger substitute to create the Beyond Taco.

Expect to see more tacos, sausage, meatless balls, plant-based loaf, chili and so on incorporated into menus as chefs become more accustomed to using these products as normal items in their walk-ins.

And keep an eye out for seafood substitutes, from tomato-based tuna alternatives to seaweed-based shrimp cognates, to become more widespread. Plant-based substances meant to resemble cooked tuna, for use in tuna-salad substitutes, are set to come onstream, too.

There also will be a revolution in cheese replacements, whether it’s modified coconut oil and tapioca or similar blends that continue to improve, or nut milk that scientists have figured out how to curdle and ferment just like real cheese. (That’s not new, but the products keep getting better.)

You’ll also be seeing more nut-free milk substitutes made from sesame and pumpkin seeds — both available now — that cater to people with allergies.

2019 was the year the humble chicken sandwich rose up. The chicken sandwich of the year was, of course, from Popeyes. It was the sandwich that inspired thousands of tweets and a surge in traffic for the brand. But Americans’ passion for poultry sandwiches goes far beyond one menu item. 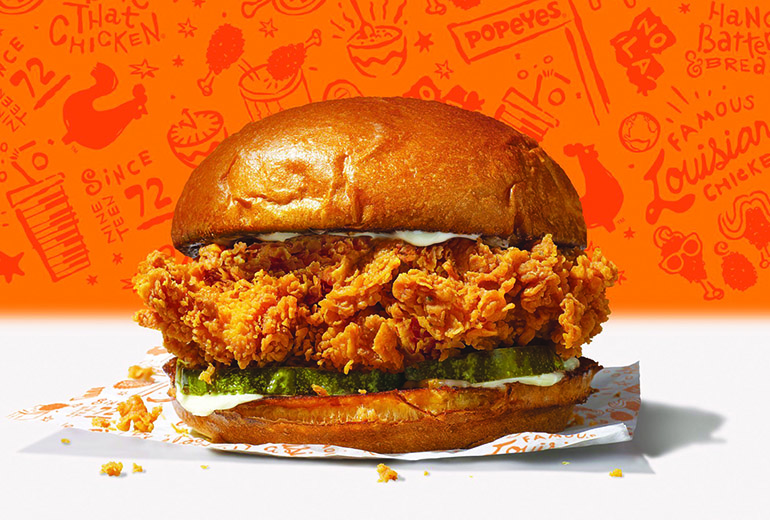 Nearly half of all menus include a chicken sandwich, and almost 80% of consumers like or love the menu item, according to Datassential. For the year ended August 2019, there were 3.2 billion servings of chicken sandwiches ordered at quick-service restaurants, up 2.3% from the same period a year ago.

With those numbers, it’s no wonder there’s a chicken sandwich war going on with no signs of stopping in 2020.

“A Chicken Sandwich at McDonald’s should be our top priority,” wrote the National Owners Association, a coalition of McDonald’s franchisees in a letter to operators earlier this year. “JFK called for a man on the moon; our call should be a category-leading chicken sandwich.”

We’ll see more chicken sandwiches on menus, and not just at lunch and dinner. 2020 will see more of these menu items at breakfast, like Wendy’s Honey Butter Chicken Biscuit, part of the brand’s upcoming breakfast rollout. 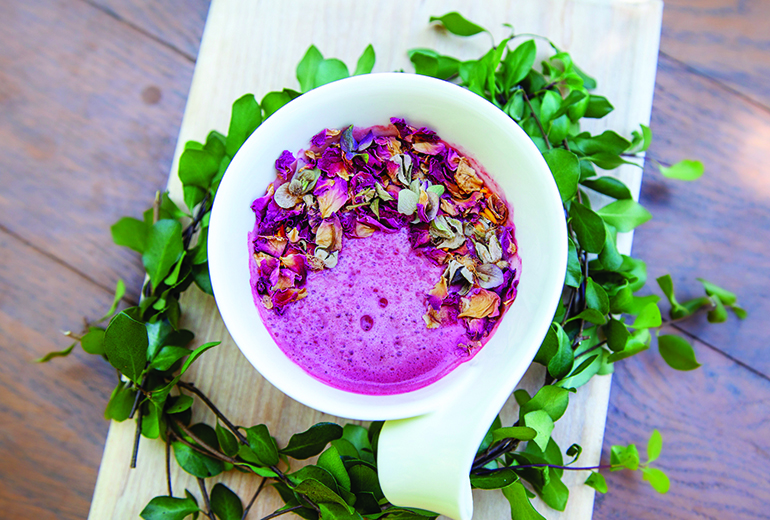 Moon milk comes down to earth

Get ready for good-mood foods and beverages with function, from adaptogens to probiotics and more mood-altering properties than ever before.

A critical mass of consumers is now actively seeking out food that does more than simply fuel the body; they are looking for food that elevates our existence and aids in bodily functions, like productivity and sleep. Expect forward-thinking restaurants to capitalize on the trend.

One such elixir: moon milk. Moon milk comes from Ayurveda, one of the oldest systems for natural healing in the world. Milk (cow, cashew or other), blended with adaptogenic herbs like ashwagandha, becomes a healing  — and often Instagrammable — beverage with marketability galore. (Take note of ashwagandha, by the way. You’ll be hearing more about the medicinal herb next year, too.)

Such drinks, which combine form and function, are a course correction from the sugar- and glitter-laden beverages that have garnered likes on social media in recent years. There’s a shift toward alcoholic and non-alcoholic drinks that look just as good as they feel to your gut. 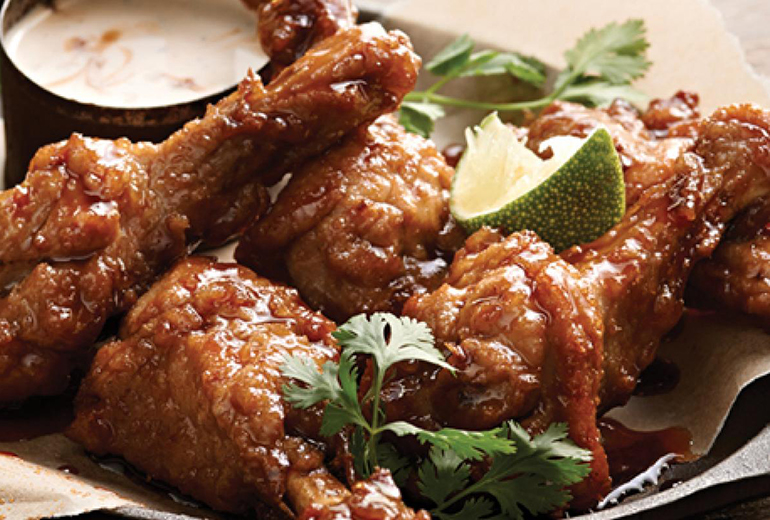 Chicken wings, coated in spicy Buffalo sauce or otherwise, are now an enduring part of American culture and will likely continue to be in the coming year. In fact, the National Chicken Council estimates that wing consumption will increase in the United States by another 2% in 2020. And Millennials, and many other consumers, tend to prefer “boneless wings” made from chicken breast to the real thing.

Poultry producers have moved to get in on the action. Last year Jennie-O offered fried and sauced turkey “drummies” at a party during the National Restaurant Show, and this year at the MUFSO conference in Denver, Maple Leaf Farms had duck wings on display.

This isn’t a brand-new trend. Casual-dining chain Brick House Tavern & Tap, part of the Houston-based Ignite Restaurant Group, introduced duck wings for the 2013
football season, and they’re on the current menu, too.

Really, anything that can be shaped in pieces the size of a bite or two, fried, sauced and shared with friends can play the role that chicken wings do, so you can expect to see more Buffalo cauliflower on menus, and Buffalo plant-based protein, and probably Buffalo forms of other trending vegetables, such as broccoli and carrots, and maybe succulent
Buffalo chicken thigh pieces as Americans continue to move in the direction of dark meat.

You can also expect them to be coated in barbecue sauce, hot honey, garlic-Parmesan sauce, Sriracha, gochujang and other popular flavors. 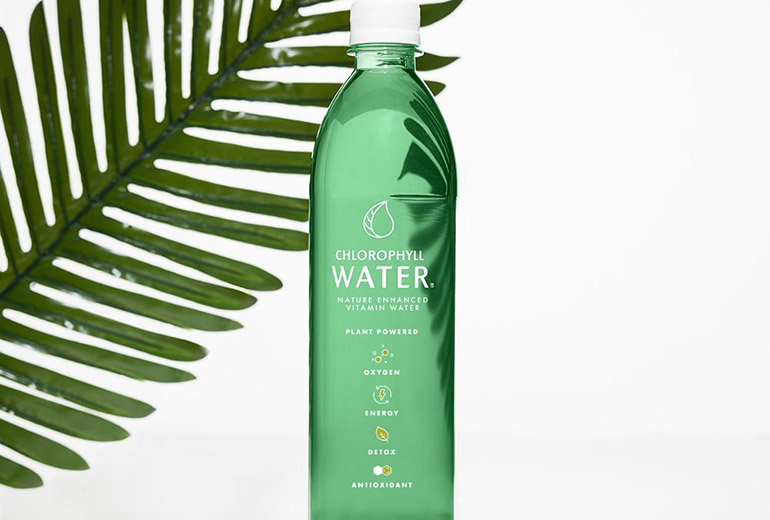 As consumers continue to move away from carbonated soft drinks (except for seltzer, consumption of which is growing), and toward beverages with perceived health benefits, you can expect them to drink more modified waters.

Nielsen data valued the American “value-added water” category at $1.7 billion for the year ended Oct. 5, an annual increase of around 9% from a year earlier.

Most of that is in ready-to-drink beverages, such as the nearly ubiquitous Vitamin Water or the relatively new Chlorophyll Water, which is enhanced with vitamins A, B12, C and D as well as the green substance that plants use for photosynthesis.

Although these drinks are sold mostly in retail rather than foodservice, you can expect manufacturers to cater more to restaurants. For example, alkaline water, which has a higher pH than normal water and is accompanied by many largely unsubstantiated health claims, has become so popular that ice-and-water machine manufacturer Hoshizaki recently introduced a machine that dispenses not just hot and cold water, but also sparkling and alkaline water.

You can also expect to see water with added antioxidants, immunity boosters, digestion aids, protein and caffeine — all traits that research firm Mintel said consumers were interested in having in their water. 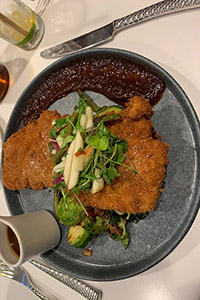 Schnitzel steps into the spotlight

No longer just for Oktoberfest and old-school Eastern European diners whose names begin with “Der,” schnitzel is crisped up and ready for center-of-the-plate stardom.

Schnitzel is, quite simply, meat that’s pounded thin, breaded and fried. It’s showing up on menus as a craveable option in many different forms, adapting to cultural culinary environments far from the Rhine.

At the Hotel at Oberlin’s 1833 Restaurant, located on the Ohio college town’s main square, the chef is a hometown hero, Jim Barnhart, who grew up on a nearby farm and whose menu has been influenced by the area’s deep Eastern European roots. Barnhart’s pork schnitzel is crispy on the outside and heavenly fork-tender on the inside, served with a crunchy cornichon and raw apple salad, bacon-spiked Brussels sprouts and a cute pitcher with savory gravy guests can drizzle at their leisure.

Also, schnitzel works with any protein, as seen at seven-unit Gott’s Roadside, where buttermilk-breaded and fried Mary’s chicken is topped with arugula herb salad, cucumber and pickled turnips and served on a brioche bun with turmeric mayo for a Cali-cool take on schnitzel.