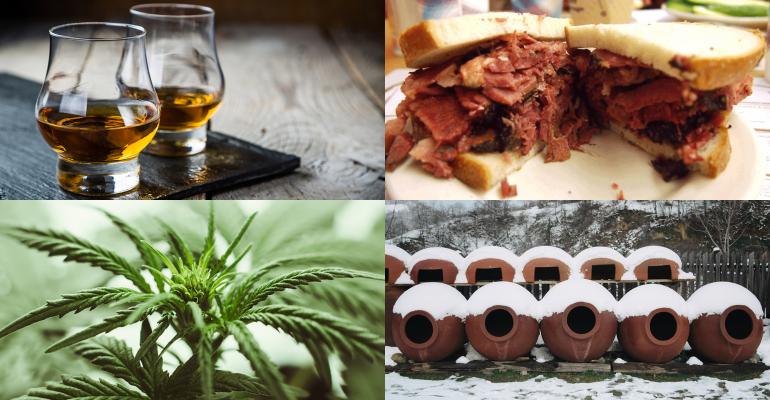 8 food and drink predictions for 2018

Every year, NRN senior food editor Bret Thorn shares his food and beverage predictions for the coming 12 months. Find out what to expect on restaurant menus in 2018.

Slower-growing chicken is becoming standard at many colleges and universities, whose foodservice providers have committed to buying chickens that live longer lives; are allowed to exhibit natural behaviors (dust bathing, pecking, running around); and, they hope, exhibit fewer symptoms of Woody Breast, Green Muscle Disease and other ailments that can affect meat quality. Perdue, the fourth-largest chicken producer in the U.S., has committed to slower-growing birds. And more independent operators are exploring ways to make steaks from old dairy cows and beef cows used for breeding that are past their prime. New, gamier steak options result in a better return for cattle farmers and a compelling story for operators to tell customers. As concern rises for the health of our oceans and the life within it, a growing number of independent operators are introducing customers to lesser known fish, such as porgy and lionfish, as more sustainable options to widely consumed items such as tuna and shrimp. Traditionally discarded in favor of more marketable species, these types of seafood are sometimes marketed as “trash fish.”

But Sea to Table, which connects restaurants with sustainable fisheries, saw fit to rent a booth at MUFSO this year, NRN’s conference that caters to restaurant chains. Word on the floor was that at least one pretty large chain was exploring the possibility of featuring an underutilized species on the menu. If successful, that would open the floodgates for other restaurants to offer lesser known and more sustainable seafood. This fluffy Indian flatbread, traditionally baked in a tandoor, is the fastest-growing bread on menus, according to Datassential. And it’s rising beyond Indian restaurants: TGI Fridays serves a Mediterranean Shrimp Naan sandwich of grilled shrimp with cucumber yogurt sauce, romaine, kale, garlic, basil and tomatoes on naan. The fact that chains are referring to naan instead of pita, which would have likely been their choice just a few years ago, indicates that naan might be one of the hero foods that moves Indian cuisine further into the mainstream.

There’s been a lot of talk of marijuana being added to food in the growing number of states where pot is legal not just for medical use, but for recreational use as well.

In general, marijuana and products infused with it can only be sold by licensed dispensaries, meaning restaurants and bars can’t use it as an ingredient in goods sold or given away. It’s unclear whether hemp products would fall under different regulations. But restrictions will likely relax. Denver residents have already voted in favor of allowing restaurants to be licensed to allow customers to use pot on-premise, subject to local community approval and other restrictions — although they still can’t sell it, and smoking indoors remains illegal.

I suspect that early uses of marijuana in restaurant food and drink will not be with the euphoria-inducing and brain-clouding chemical Tetrahydrocannabinol, or THC, but with Cannabidiol, or CBD. While it doesn’t produce a high, studies have indicated that CBD can reduce anxiety and paranoia; boost energy; and relieve pain, inflammation, insomnia and other ailments, including epilepsy.

On a federal level, CBD, like all marijuana derivatives, is a Schedule 1 drug — like heroin — but its non-narcotic effects may pave the way for a faster track to further deregulation. Regulations regarding distilleries are evolving as state and local authorities seek to accommodate the growing interest in locally made spirits. In October, The Cavalier Hotel in Virginia Beach, Va., said it would become the first hotel in the country to integrate a distillery on its property with the opening of Tarnished Truth. Where one in-house distillery opens, more are likely to follow. Wine drinkers are looking for something new, natural and with a compelling story, and the former Soviet Republic of Georgia delivers all three. With a wine-making tradition going back thousands of years, Georgia is exporting wines that are inexpensive, kind of funky and, in many cases, all-natural. Sommeliers are starting to rave about them, and major cookbooks and wine books about Georgia have been published this year. Possibly thanks to a push from the country’s agriculture ministry, sales of Georgian wines in the U.S. are projected to rise by 50 percent or more this year, according to a publicist for Georgian wine. 7. Creative use of waste Delicatessens serving corned beef, pastrami and smoked fish are opening all over the country, both in fast-casual and full-service formats. Among them are Wexler’s Deli in Los Angeles, Harry & Ida’s Luncheonette in New York City, Mamaleh’s in Cambridge, Mass., and Steingold’s in Chicago, according to AF & Co.