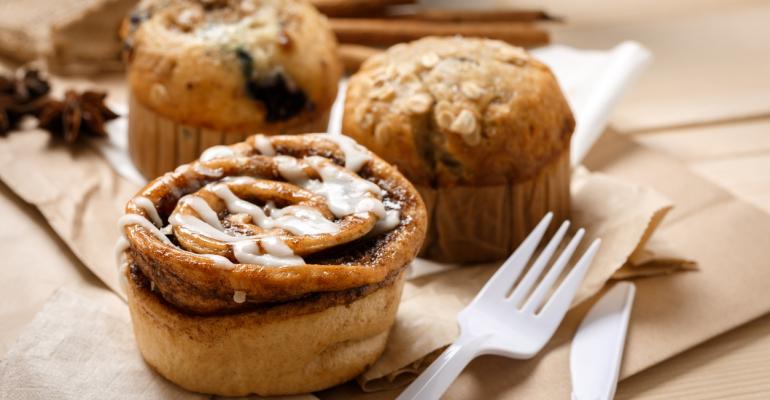 But the indulgent treats are not an everyday item for all customers, says Mike Ferretti, chief executive of Great Harvest. So to entice greater frequency, Great Harvest is testing cinnamon sticks — smaller versions of the large sweet roll. The sticks are easier to make, more portable and are attractive to customers looking for lower calorie options which are still a treat.

“Our legacy breakfast products are all sweet,” Ferretti says. “We’ve tried adding savory items over the years but have not been super successful with it.”

Related: How can I drive consumer interest with bakery items?

Breakfast has emerged as the most important meal of the day for many limited-service restaurant operators — it’s been the main area of growth for the industry for the past three years. Morning meal traffic increased from 3 to 5 percent since 2013 at quick service restaurants, according to market research firm, the NPD Group.

Steady growth means heightened competition for consumers’ morning dollars, especially among bakery-cafe, quick service and fast casual concepts that are vying with each other and convenience stores. Often working hand-in-hand with their suppliers, many operators are offering baked goods with a fresh, homemade feel and portability that are key to driving breakfast traffic.

According to Datassential’s 2016 Keynote Report on Breakfast, cinnamon rolls are rated as America’s favorite breakfast baked good — 49 percent of those individuals polled said they love them. Doughnuts came in second at 47 percent, and croissants ranked third at 46 percent.

Since fast food giant McDonald’s Corp. revived its breakfast menu and began offering it throughout the day, other quick service  concepts have also enhanced their morning menus to include sweet as well as savory. McDonald’s tested a “chicken and waffles” selection — a McChicken patty sandwiched between two McGriddle cakes — in its Florida stores last spring.

Jack in the Box’s “Brunchfast” launched in November includes mini pancakes and orange cranberry muffins in a 10-item menu that also features its Brunch Burger — a croissant topped with a beef patty, fried egg, bacon and cheese — and a bacon and egg chicken sandwich on a toasted English muffin.

According to Datassential, the fastest growing trends for the breakfast bakery category include mini pastries, banana bread, beignets and doughnuts.

A survey by Datassential notes the top baked breakfast items among limited-service restaurants are as follows:

Operators also should consider portable handheld items that are perfect for drive-thru and takeout orders, as takeout can account for more than half of breakfast sales, says Jon Jameson, a founding partner of Results Thru Strategy and a former chief brand officer for Panera.

Convenience and speed are also drivers at breakfast, he says.

Some operators are turning to selections that are created off-site but finished on-premise and can help to convey a freshly made, artisanal profile. Besides preparing small batches at regular intervals, operators can use pre-baked or speed-scratch items that can be conveniently finished in minutes per customer orders, Jameson says.

Limited-service operators should work with a supplier to make sure they are offering a high quality product, and a product that will differentiate them from competitors, he says.

“If the local bakery has great muffins, that may not be the avenue to explore,” Jameson says. “Add sweets or something they don’t have. Maybe you add a line of scones or biscuits. Find that signature breakfast item that will draw people in.”

However, advises Ferretti from Great Harvest, operators need to keep in mind that “Breakfast is not like any other daypart. You don’t mess with people before their coffee has kicked in … The experience has to be convenient and fit into their morning pattern.”