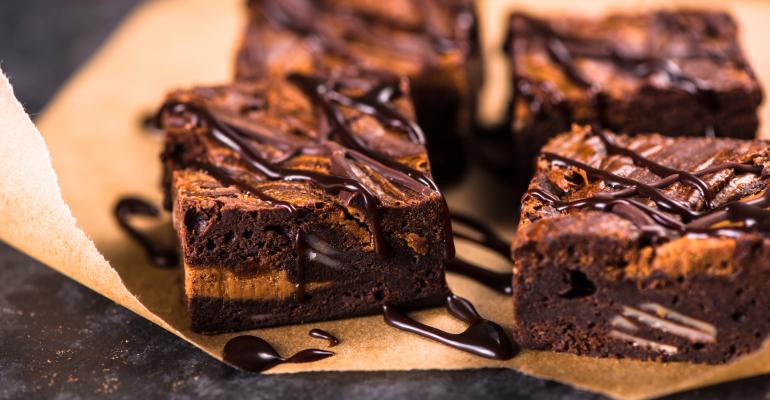 To keep up with consumers’ penchant for sweet snacks and desserts, the staff at Fresh to Order locations bake small, fresh batches of the Fudge Brownie 27 throughout the day.

“You can always get a brownie,” says Chris Campagna, vice president of marketing for the upscale fast-casual concept based in Alpharetta, Ga. “But the afternoon, starting around 2 or 3 p.m., we’re seeing that daypart rise so we are constantly baking those fudge brownies.”

Snacking is as strong as ever among customers, from millennials looking for a late afternoon energy boost to baby boomers wanting to reward themselves with an indulgent treat. In an effort to cater to that growing market, restaurant operators are offering a variety of sweet and indulgent baked sweets, promotions and menu pairings and other strategies to increase incremental sales with snacks.

Among millennials 77 percent said snacking is necessary to get through the day, according to Snacking in Foodservice, a June 2016 report from Chicago marketing research firm Mintel Group Ltd. Those snackers often are looking for a pick-me-up in the afternoon. Baby boomers do not frequent snack shops as often as millennials, but when they do they are looking to treat themselves.

Here are some ways quick-service, fast-casual and specialty snack concepts are promoting the sweeter side of their menus.

While consumers across age groups cited “healthier snacks” as their top motivation for purchasing snacks, nearly 70 percent agree the best snacks are indulgent, according to the Mintel report. Caramel, hot fudge, cinnamon sugar and vanilla icing are some of the dipping and flavor options for customers at Ben’s Soft Pretzels, an 82-unit concept in eight states and based in Goshen, Ind.

“Sweet has been with us from the beginning,” says co-founder Scott Jones. “Over time we’ve experimented with a variety of flavors. Our Dutch almond pretzel has real almond and sugar baked in. Popular dips for it are cream cheese, caramel, peanut butter and hot fudge.”

Get Fried, a quick-service French fry chain based in Buffalo, N.Y., introduced a sweet potato treat that offers a more healthful option, but one that can be made more indulgent with the addition of toppings, from organic honey to powdered sugar and maple syrup.

Making snacks portable for on-the-go-consumption is still a desired quality for 67 percent of surveyed consumers, ages 18 to 44, according to the Mintel report.

Snacking is still a category that generally occurs while multitasking or during a commute. According to Mintel’s Transumers Trend report, people who travel by public forms of transport versus private are constantly seeking ways to make the most of their commute. This presents an opportunity for operators to put the right-sized, portable snack in their hands.

For example, Fresh to Order offers cupcakes and cookies that are the right size for grab n' go customers who might want to snack in transit. Ben’s offers pretzel bites. Other concepts feature doughnuts and treats that can be handheld and eaten while on the move.

Consumers also like to pair a snack with a beverage, so offering a value deal can help drive sales — particularly given that beverages tend to be the highest profit margin items on a menu, Mintel reports.

Consumers, especially millennials, also are looking for smaller plates of larger entrées to purchase as snacks, according to Mintel. Fresh to Order found when it created small plate options; consumers who bought them were also more likely to purchase a brownie, cupcake or cookie to go with their meal.

Another way to drive consumer interest in a snack is to host a contest or promotion that elicits responses, operators say.

Get Fried introduced its sweet potato fry snack with a contest asking customers to vote for the best toppings. The winner was a scoop of vanilla ice cream, chocolate sauce and powdered sugar.

“We did some giveaways to get people motivated,” Jones says. “Everyone loves a free Ben’s pretzel.”

But whichever route an operator takes, many are finding that offering sweet snacks throughout the day can help to boost traffic and generate sales.