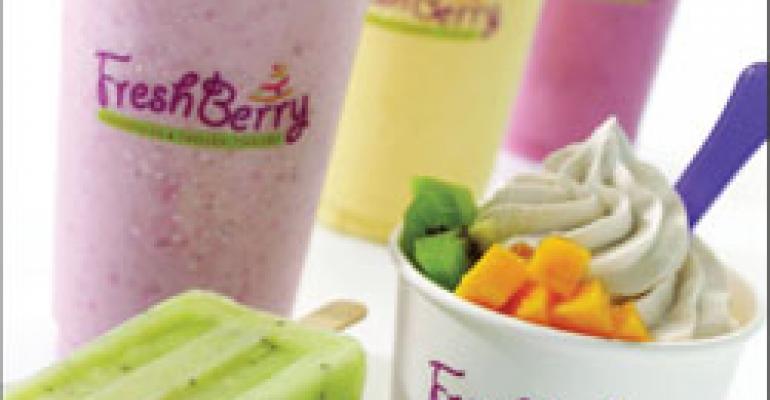 Yogurt chains yearn to establish strongholds in between the coasts

Are sugar-loving Americans in the nation’s heartland ready for the tart taste of newfangled “natural” frozen yogurt that’s become trendy in Los Angeles and New York?

Though that question awaits a clear answer, many established and upstart frozen-yogurt chains that are opening shops from coast to coast are counting on the readiness of mainstream consumers.

Although Los Angeles-based Pinkberry, launched in 2004 and now up to 58 units, has been garnering considerable publicity, it does not have an exclusive corner on the emerging tart-yogurt market that’s also being tapped by another chain import from South Korea, Red Mango, and by such U.S.-born brands as FreshBerry.

Meanwhile, frozen yogurt is being sold more at restaurant and beverage outlets that don’t specialize in it, and nonfrozen yogurt also is gaining prominence on menus nationwide.

“We anticipate significant unit growth throughout the U.S. from chains like Pinkberry, Red Mango and FreshBerry,” said restaurant consultant and researcher Darren Tristano, vice president of Technomic Inc. of Chicago. “The product is fresh, healthy, and its taste is considered craveable and its following cultlike.”

According to NPD Group CREST data, servings of frozen yogurt in foodservice have increased 7 percent this year over comparable periods in 2007, said Chris Moore, senior vice president of foodservice for Dairy Management Inc., a dairy industry promotional and research group based in Rosemont, Ill.

“It’s an easy way to eat healthier,” he said. “We have seen an explosion of yogurt, both in retail and foodservice. Restaurant operators are seeking products consumers can eat on the go, for meal replacements and p.m. snacks,” Moore said.

Even nonfrozen yogurt is gaining mass-market recognition in foodservice beyond the fruit parfaits of McDonald’s. In addition to a newly launched line of yogurt-and-fruit-based smoothies at 2,100-unit Jack in the Box, yogurt is a principal ingredient in a new line of breakfast smoothies at Jamba Juice, and the Coffee Bean & Tea Leaf chain has launched a fruit-flavored iced blended drink with yogurt. Starbucks Coffee, too, is said to be readying the rollout of yogurt smoothies this summer.

Meanwhile, the familiar machine-dispensed, soft-serve-style frozen yogurt that has waxed and waned as a treat trend for decades is making a comeback in new tart incarnations. For example, Cold Stone Creamery is rolling out a frozen-yogurt product this July as a permanent addition to the menu of its 1,400 units, spokeswoman Anne Christenson said.

“You see cycles for any brand,” he said. “A little renewed interest can only be helpful for us and helps us be the best we can be. We recognize there is great competition, but we welcome that.”

Willis said TCBY plans to speed up growth in 2009 after focusing on remodeling its older stores this year. The chain has been testing a new quick-service brand called Yovana that features fresh yogurt at two airport locations. However, TCBY intends to expand its namesake brand rather than Yovana, and “will emphasize re-establishing TCBY as the country’s best yogurt,” Willis said.

More chain competitors are vying for that reputation, including Toronto-based Yogen Früz, now entering the U.S. market; Red Mango, based in Culver City, Calif.; Yogurt-land, based in La Mirada, Calif.; and FreshBerry Frozen Yogurt Cafe, based in Tulsa, Okla.

Yogen Früz, a 22-year-old chain with more than 1,100 branches in over 20 countries, recently opened its first U.S. unit in Schaumburg, Ill., in the giant Woodfield Mall. It has since added two other U.S. branches, including one in San Francisco. Yogen Früz also has signed master franchise agreements for South Florida and Los Angeles.

The chain specializes in two products: soft-serve yogurt with a choice of fresh fruit and other toppings, and Blend It, which is frozen yogurt machine-blended on site with a choice of 16 kinds of flash-frozen fruit. Including units ranging in size from 50-square-foot kiosks to 1,400-square-foot restaurants with seating, Yogen Früz outlets are primarily located in malls, said Jerry Isaacson, the chain’s Chicago-area franchisee.

The frozen yogurt for the chain’s U.S. and Canadian stores is manufactured in four Food and Drug Administration-approved factories in North America, Isaacson noted.

Red Mango, which originated in South Korea and debuted in the Los Angeles area three years ago, now has 26 units open in seven states, of which three-fourths are franchised and most have some seating, said Dan Kim, its chief executive.

“We’re capitalizing on the increasing awareness of healthier foods and treats and the need for escape,” he said.

Yogurtland differs from most competitors by selling self-serve frozen yogurt. The concept is especially targeted at teens and young adults with its low prices and late hours, running till around midnight. Now totaling 13 units in California, Nevada, New York and Hawaii, Yogurtland prices its yogurt and toppings at 30 cents an ounce in most markets. Its frappes and smoothies, made by crew members, are $3.25 for a regular size and $4.45 for a large.

FreshBerry Frozen Yogurt Cafe, being developed by Beautiful Brands International, parent company of Camille’s Sidewalk Cafe and Coney Beach, is gearing up for major expansion from its Tulsa, Okla., headquarters, where its first unit opened in January.

President and chief executive David Rutkauskas said he expects between 12 and 15 franchised Fresh-Berry units to open this year, and said agreements had already been signed for Scottsdale, Ariz.; Dallas; Houston; Reno, Nev.; and Lake Tahoe and Orange County, Calif.

“The time is right for frozen yogurt to make a comeback,” Rutkauskas said. “Yogurt has been dead for 20 years. The sweet, sugary frozen yogurt of the ‘80s is tired. FreshBerry gives customers a delicious yet healthy alternative to typical ice cream shops.”

Not all expanding frozen-yogurt chains are pinning their hopes on a trend toward tartness, however. Yolato, a three-year-old chain based in New York that began franchising this year, combines frozen yogurt with Italian gelato. It also offers nondairy fruit sorbets and licenses its branded products for retail stores.

Other frozen-yogurt startups that are growing include Sweetgreen in Washington, D.C., and Berry Chill in Chicago. One of Sweetgreen’s investors is Joseph Bastianich of the New York City restaurant family, who is a family friend of Sweetgreen founder Nicolas Zumay.