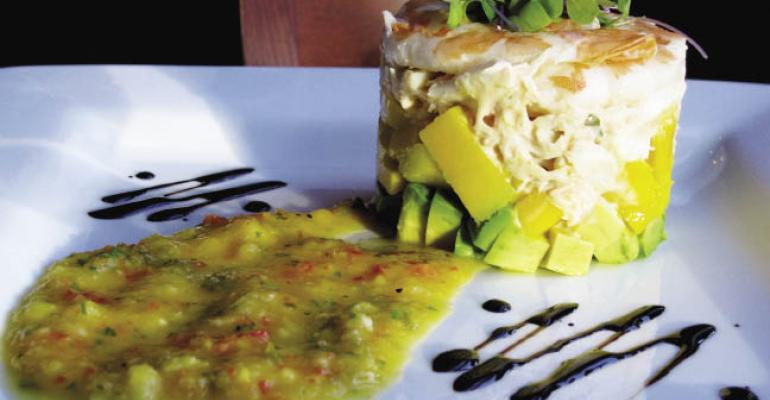 As more customers are questioning the source of restaurant seafood in the wake of this past summer’s BP oil disaster in the Gulf of Mexico, McFarland executives said their concepts are well-positioned both to assuage consumer concerns and to educate.

“It is becoming more of a focus these days,” said Terry Sullivan, vice president of operations for Wyland’s Ocean Blue. “People are taking more of an active role in sustainable seafood and making a conscious decision about where they want to spend their discretionary dollars.”

The company, founded by Florida businessman and investor Peter McFarland, opened its first Guy Harvey’s Island Grill in its home base of Marco Island, Fla., in 2006. By the end of 2010, the company plans to have opened six grills, three upscale Wyland’s Ocean Blue restaurants and a Guy Harvey’s Perfect Spot. Perfect Spot is similar to the saltwater-fish fare of Island Grills but, because it will open in landlocked Denver in September, it features freshwater fish and a more inland name.

The first Wyland’s opened in June in a new shopping center in Fairview, Texas, a northern suburb of Dallas. It covers 9,800 square feet with about 350 seats. The second Wyland’s, which will open in Denver in October, is smaller, with about 225 seats.

“It all depends on the site we get,” Sullivan said.

McFarland, speaking from California, where he was looking at real estate, said both restaurant concepts emphasize their relationships to the artists whose names they carry.

“These are two of the top artist-conservationists,” he said. “The clientele for Wyland’s Ocean Blue is a bit more higher-end and upscale. Guy Harvey’s is more casual, fun, with families and youths.”

The restaurants feature galleries or retail areas that exhibit the artists’ works. Guy Harvey’s has a broader retail business that includes T-shirts, hot sauces and license plate frames, among other items.

“People relate to these two artists,” McFarland said. “Wyland is more widely known for the Pacific, and Guy Harvey is known for the Gulf and the Atlantic.”

The restaurants serve fish that are on the safe lists of the Monterey Bay Aquarium Seafood Watch Program, and Guy Harvey’s own recommendations for nonexploited marine life.

“We want to educate people on fish that are exploited,” McFarland said. “We want people’s awareness to focus on the oceans and what man is doing to those as well as to land.”

Some proceeds from the restaurants are funneled back to the artists’ foundations, which are focused on marine conservation, and McFarland’s own Think Blue Foundation, which has a similar mission.

McFarland said he recruited artists to give patrons an immediate suggestion for what kind of restaurant experience they could expect. He cited Jimmy Buffett’s Margaritaville, Toby Keith’s I Love This Bar & Grill and Tommy Bahama cafes as examples.

“Even though Tommy Bahama is not a person, it’s an experience,” he added.

Five Guy Harvey’s are now open — in Marco Island, Panama City and Key West in Florida, as well as in Mount Pleasant, S.C., and Orange Beach, Ala. — and five more are planned, including one in Fairview, Texas, that will be opening in the next few months near Wyland’s, and another in Denver. Menu prices range from $9 to $10 for starters to $18 to $23 for full-size entrées.

“The Guy Harvey’s is targeted more at the families with kids, as it has fish tanks and TVs and a more casual, laid-back environment,” Sullivan said.

October’s Wyland’s opening in Denver will be followed by another in November at the Shops at Willow Bend in Plano, Texas, and then one in Austin, Texas, early in 2011.

Dinner check averages for Wyland’s are $42 to $45, Sullivan said. Several Ocean Blue stores, such as the one attached to the mall in Plano, will offer lunch, Sullivan said, but it will depend on the market. McFarland said he envisions having 10 of the Ocean Blue units open within the next few years.

“At Ocean Blue, we wanted to kick it up to a nicer environment,” Sullivan said. “We have a bigger wine selection and are really focused on the fresh fish, plate presentations and quality ingredients.”