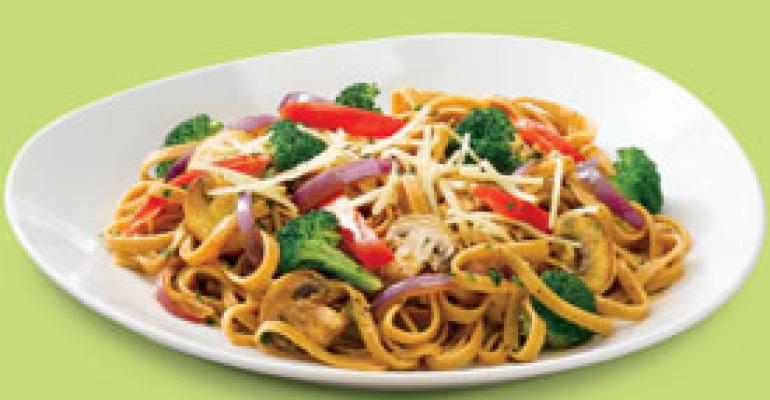 While whole-grain breads and brown rice may be growing in importance as dining options, when it comes to whole-grain pasta, slow and steady is the pace.

An increasing number of chain and independent restaurants have been introducing whole-grain, primarily wheat, pastas to their menus. Generally, operators add a single cut, frequently penne or fettuccine, to menus that include many other pasta options, though in some cases, the whole-grain offering is available only upon customer request.

“Generally if a consumer is going to ask for a substitute for whole grain, they’ll do it for pasta,” she says.

Operators say they’re introducing these whole-grain noodles to include more menu choices and to satisfy customer interest in healthier eating.

At Olive Garden, Darden Restaurant’s 603-unit Italian-style chain, guests have been able to request any pasta dish that is priced between $7.25 and $16.95, depending on daypart and location, with whole-grain linguine for the past 18 months, says director of media relations Steve Coe.

Other chains are providing similar choices. The 90-unit Buca di Beppo offers whole-wheat penne on request, priced from $8.99 to $26.99, as does Romano’s Macaroni Grill, for approximately $8.99. At the 45-unit Pasta Pomodoro chain, multigrain penne is offered for $7.50 to $7.95.

“We wanted to be able to offer more healthy options for our guests, and we knew that whole grains were becoming more and more popular with the general public as well as our guests,” says Krista Koranda, corporate communications manager.

Customers also can substitute the whole-grain fettuccine in any other noodle dish.

Frighetto reports whole-grain dry spaghetti grew from a 4.4-percent dollar share of the dry-spaghetti category four years ago to 10.7 percent for the 52-week period ended Aug. 11, with more than $44.6 million spent in total. That total figure was up 29.2 percent compared with a year ago.

While consumer sales are getting stronger in retail, dissatisfaction with the quality of dried whole-grain pastas had kept some chefs from adding them to their menus.

“There are quite a few whole-grain noodle vendors available and many options, but few vendors met our high standards,” Koranda says.

But Roberta Adamo, chef at the Hilton Restaurant Group Penne Restaurant and Wine Bar in Philadelphia, says finding a commercial product she likes well enough to serve her family inspired her to look beyond the whole-wheat fettuccine with Brussels sprouts, prosciutto and fontina dish she usually adds to her menu in winter. Adamo makes her own pasta, so after experimenting, she decided on a thin-strand, capellini-based dish with a lighter sauce to suit the summer months. It is $13 at lunch, $23 at dinner.

The thin pasta was served with shrimp in a sauce of fresh tomatoes, garlic, olive oil and fresh herbs. She says her whole-wheat capellini was supple, even though there’s a more grainy texture than pasta made with semolina flour. While it was created as a summer item, the popularity of the whole-wheat capellini has led her to consider leaving it on the menu all year.

Customer response has been good.

“A lot of people have been trying for health reasons, I’m sure, as well as for curiosity,” she says.

George Powell, chef at North by Northwest Restaurant and Brewery in Austin, Texas, recently added a house-made, whole-wheat fettuccine dish to his menu.

“We were just looking at adding it as an alternative,” Powell says. “I love whole-wheat breads and such, so I gave it a try.”

Other sheet pasta dishes are house-made at North by Northwest, so Powell set to work on a whole-wheat variety.

“I can’t say I’ve been real pleased by the commercial brands I’ve tried,” he says. “We went with fettuccine because it is still considered a bit upscale, compared to spaghetti and linguine.”

The result, served in a light Alfredo sauce with vegetables for $10.95, has been on the menu for three months and has been popular, he says. Powell is currently experimenting with making other fresh-pasta forms and may soon serve a whole-wheat lasagna dish.

For places where hand-rolled pastas are a feature, whole-wheat flour presents no special issues, Adamo says.

“It’s not difficult to work with,” she says. “It’s a harder wheat, but semolina is hard, too.”

She says in the past she might have added unbleached white flour to the mix when making whole-wheat pasta, but the heartier texture seems to be less alien to American palates today.

Selecting the cut of pasta is an issue for most operators. Olive Garden’s Coe says the chain’s chefs picked whole-wheat linguine over, say, penne, because it pairs better with more sauces.

“The linguine pairs well with the lighter pomodoro sauce as well as with a heavier sauce like Alfredo,” he says.

“The whole-grain fettuccine noodle that we chose was the best, highest-quality whole-grain option we could find,” says Koranda of Noodles & Co. “We tasted and tested numerous noodles and we chose the best tasting whole-grain noodle with the best texture.”

While wheat is the apparent mainstream grain of choice in noodle making, options more often found in ethnic or vegetarian restaurant settings may be making headway. The University Village Center, a retirement village in Tampa, Fla., recently was cited in the Whole Grain Council’s Whole Grains Challenge competition for regularly serving buckwheat soba noodle salad. See page 36 for more details about the competition.