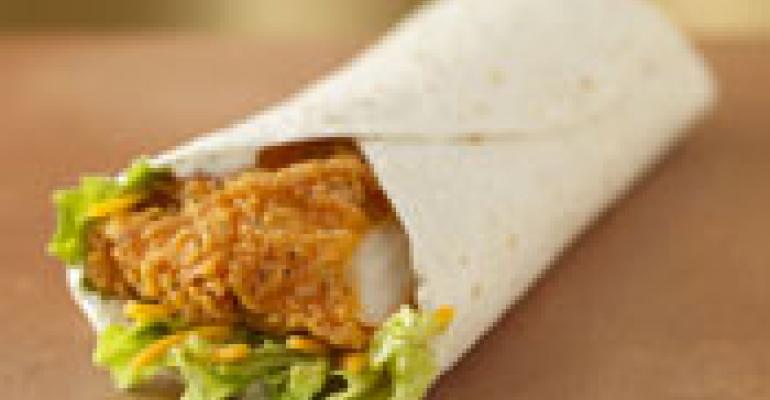 DUBLIN Ohio Same-store sales at No. 3 burger brand Wendy’s continued to fall for the first three months of the year, parent company Wendy’s International Inc. said Thursday. Wendy’s said it plans to drive sales in the months ahead with new menu items, including its own version of a portable chicken wrap that has been successful at fast-food rivals.

Both McDonald’s and Burger King, the No. 1 and No. 2 burger brands, respectively, have been posting positive same-store sales gains of late, citing their value menus, breakfast offerings and new menu items, like McDonald’s chicken Snack Wraps or Burger King’s Homestyle Melts.

Wendy’s said this week it is introducing Chicken Go Wraps, which feature grilled, fried or spicy chicken with cheddar cheese, lettuce, and ranch or honey-mustard sauce, all wrapped in a warm flour tortilla.

Wendy’s is the latest to follow McDonald’s lead on a portable chicken wrap as a snack or lunch offering. McDonald's Snack Wrap debuted in 2006. In February of this year, KFC introduced its version, called the Toasted Wrap. Wendy 's Chicken Go Wraps, priced at a suggested $1.49 each, are slightly more expensive than McDonald's and KFC's $1.29 versions.

Wendy's said it is also rolling out two new breakfast items in the 1,000 locations that now offer the chain's morning menu. The new items are the Maple Baked Frescuit, which combines eggs, cheese, and grilled sausage or hickory-smoked bacon on a maple syrup-infused biscuit, and the Coffee Cake Muffin, which is served warm with a cinnamon crumble topping.

In the latest quarter, sales trends were the strongest in February, Wendy’s reported, when the chain promoted its new fish sandwich to coincide with the Lenten season. In February, U.S. franchised restaurants posted a monthly same-store sales gain of 2.3 percent and corporate restaurants were able to post a 0.4-percent increase. In January, however, when Wendy’s promoted its Stack Attack double cheeseburger for 99 cents, results fell 2.1 percent at franchised units and 3.8 percent at corporate locations. March results at both franchised and corporate units were basically flat.

Wendy’s, which operates or franchises 6,600 locations, said it expects to report full first-quarter results on April 25. The company has remained silent on both the scheduling if its annual shareholder meeting, typically held this month, and on the outcome of the company’s year-long strategic review, which is exploring corporate options including a sale of the company.