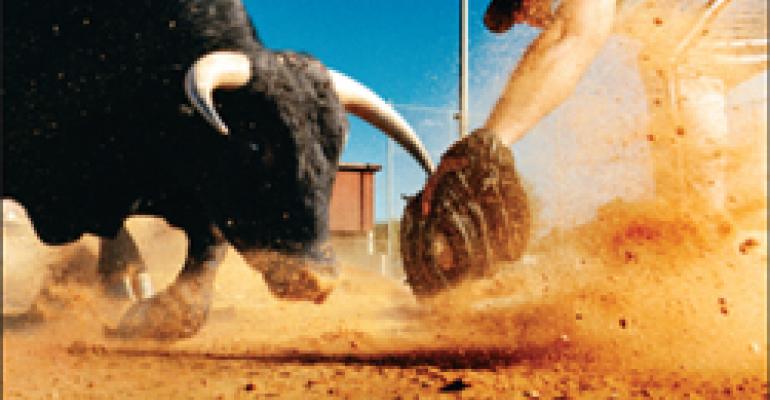 Restaurant chains that sponsor Major League Baseball teams need a good promotional follow-through or their efforts will amount to a swing and a miss, according to chain executives and an expert on sports sponsorships.

“It’s not enough just to splash your name on a [sports franchise] property anymore,” said Brett Boyle, a sports-marketing expert and marketing professor in the John Cook School of Business at St. Louis University. “There’s too many other sponsors out there getting in the way.”

He adds: “You have to use the sponsorship in such a way to get the fan to experience the brand in some way. The buzzword here is activation. You’re activating the brand through the sponsorship.”

Running a few sponsorship TV spots during the baseball season isn’t enough, he said, because the spots are directed at passive viewers who likely will forget in a few days that they’ve seen the ads.

El Torito Restaurants casual-dining chain has launched its first team sponsorship, of the Los Angeles Angels of Anaheim. The chain, whose name translates to “the little bull,” is sponsoring the Angels home bullpen this season and supporting the effort with a campaign that includes special promotions, an El Torito Night at Angels Stadium at Anaheim, Calif., and one-on-one lunches with relief pitcher Francisco Rodriguez.

Los Angeles-based Belacoso Communications came up with the campaign as it searched for a promotional link to the El Torito name that would be a true brand fit, said account director Paulette Wilhelmy. About a year ago, creative director Tony Garzio suddenly saw the natural link between “bull” and “bullpen,” Wilhelmy said.

The goal then was to develop a well-rounded sponsorship and “not just put a sign up at the stadium,” she said.

“One of the things we’re looking for is to find new people to come into El Torito,” Wilhelmy said. “We think we’re good at getting people to return, but this is a whole new type of prospecting.”

El Torito, a division of the industry’s largest operator of Mexican dinnerhouses, Real Mex Restaurants, has a high concentration of units in the Los Angeles-Orange County market, making the sponsorship a “relevant way” to reach a huge portion of customers who happen to be Angels fans, said Julie Koenig-Browne, vice president of marketing for Real Mex.

“Our goal is to reach a broader audience,” she said. “We wanted to get more actively involved in Orange County.”

The sponsorship is the first sports tiein for El Torito, but the 160-unit Papa Gino’s Pizzeria, based in Dedham, Mass., has been a Boston Red Sox marketing partner for the past five or six years, and sibling chain D’Angelo Grilled Sandwiches signed a five-year deal with the team last year, said Michael McManama, senior vice president of brand development for parent company Papa Gino’s Holding Corp.

Papa Gino’s is the official pizza of the Red Sox and sells pizza at Fenway Park.

The partnerships give both brands “access to ‘Red Sox nation,’ which is millions of people throughout New England,” he said, and it provides a platform for promotions.

Papa Gino’s Triple Play promotion last year helped boost check averages by about 6 percent during the promotional period, McManama said. The offer was three small pizzas for $15.99 and three large pizzas for $19.99. The chain plans to run a slightly different version of the promotion this year.

D’Angelo, which has more than 200 units in New England, used designated hitter David Ortiz in a promotion last year and also will feature him in a promotion this year.

“What makes [the partnership] drive sales is what you do promotionally,” McManama said. “You cannot just say ‘we’re the pizza of the Red Sox’ and expect sales. You have to create the real consumer reason for the partnership. That’s why you need a strong promotion around it.”

California Pizza Kitchen recently extended its sponsorship with the Los Angeles Dodgers to sell its pizza in Dodger Stadium and signed a new three-year partnership with the Angels to sell pizza at their ballpark.

“It really is a great way to reach our target customers,” said Sarah Grover, senior vice president of marketing and public relations for the 210-unit chain. “We have a product that works well in a venue like a ballpark.”

But sponsorships need not be limited to major league ballparks or teams. Subway restaurants is in the second year of a three-year national sponsorship with Little League Baseball and Softball, using it as part of a larger program that encourages children to be active and eat healthful meals.

Subway has signage at the Little League World Series and operates a booth there where kids can get nutrition information. Local franchisees sell sandwiches in the concession area and distribute coupons.