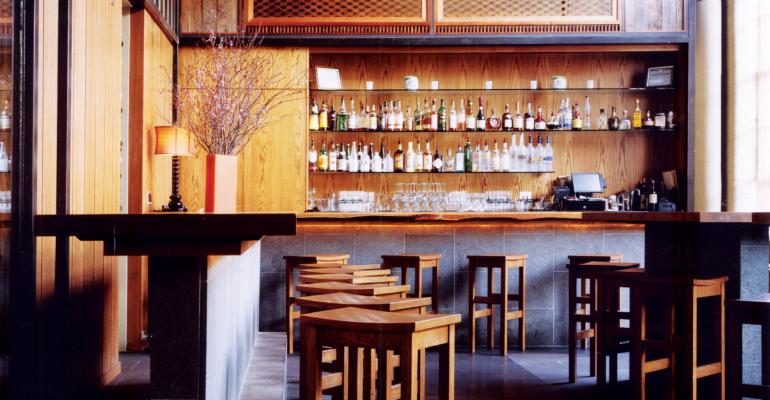 Taking a cue from Japanese businessmen and tourists, a growing number of Americans are sipping shochu with simple meals of grilled meats and fish, tempura, sashimi and noodles, in izakayas, or informal, pub-like Japanese eateries found in some major U.S. cities.

The beverage they are discovering is a traditional Japanese distilled spirit made from starches like rice, barley and sweet potato. Although obscure in the United States, shochu has surpassed sake in popularity in Japan in recent years. It typically is about 25 percent alcohol, more than wine but less than vodka, gin and rum, making it gentler on the palate. Plus, it has an affinity for fruit juices, which makes it a good base for the flavorful specialty cocktails that appeal to Americans today.

Two examples are the Shochu Breeze, made with shochu, muddled cucumber and Calpico, a Japanese soft drink, and the Yuzu Martini, made with shochu and yuzu liqueur, each priced at $10 at Kushi Izakaya & Sushi, a three-month-old izakaya in Washington, D.C.

“People are pleasantly surprised at how smooth some of these shochu cocktails are, made with a tasty liquor they didn’t know existed,” said Thom Flynn, Kushi’s food and beverage director.

“By using the best fresh ingredients and serving things with a twist, we show that shochu can be a very refreshing alternative to hard liquor,” said Payne.

“We are still in the infantile stages of showing people what shochu is,” said En manager Jeremy Adler. “But if they taste it in a cocktail, they generally like it and order another.”

The Western spirit shochu most resembles is vodka, which is generally neutral in flavor. Kabuki Restaurants Inc., a chain of 13 Japanese eateries based in Burbank, Calif., plays up the similarity by subtitling shochu as “Asian vodka” on its drinks list. Nevertheless, Kabuki master sake sommelier, Yuji Matsumoto, knows the difference.

“Shochu is smoother than vodka or other Western spirits,” said Matusmoto. “I like to use more shochu than the stronger spirits in drinks because it will not confuse peoples’ palates when they are eating sashimi or another delicate food.”

Kabuki’s Samurai, priced at $6.95, is a combination of shochu with melon liqueur, pineapple and cranberry juice. There are also five variations of the Tokyo Mojito, priced at $7.95, made with shochu and sake and a choice of mint, grapefruit, cucumber, lychee and berry flavors.

In addition, the Kabuki drinks list includes a pair of premium barley shochus with characters best appreciated on the rocks or with a lemon wedge. They are the clean and smooth tasting Iichiko Seirin, which sells for $5.50 per glass, $16.50 per carafe or $37.50 per bottle, and Kakushigura, aged in oak barrels for an aromatic, sweet finish, priced at $6.50 per glass, $19.50 per carafe and $45.95 per bottle.

Roka Akor in Scottsdale, Ariz., sister restaurant of the Roka Japanese restaurant in London, is known for house-made shochu infusions in flavors like honey, pineapple, apple and blueberry-ginger. They are served in a glass with a single large ice cube hewn from a 300-pound block of ice on the bar.

“Esthetically, the ice looks beautiful, and practically, it melts slowly so it doesn’t dilute the drink,” said bar manager Michael Ivey, who reported selling 15 to 20 infusions on a typical night.

With all that shochu has going for it, some operators see an opportunity for it to spread to other types of restaurants.

“I certainly see a lot of room for shochu to catch on stateside,” said Kushi’s Flynn. “Already, even in the past six months to a year, it has been taking off.”