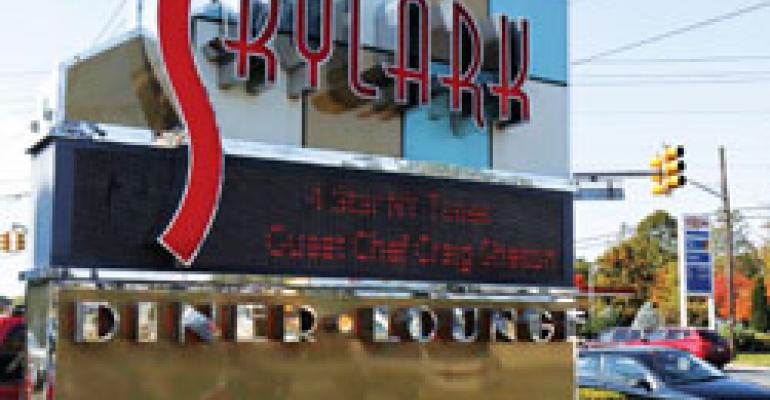 Shelton, the fine-dining chef whose celebrated restaurant The Ryland Inn in Whitehouse, N.J., went bankrupt after serious structural setbacks were compounded by the economic downturn, has been advising Katsifis’ Americana Hospitality Group for about seven months.

The result, said Katsifis, whose East Windsor, N.J.-based company operates three diners and a 1,500-seat catering facility, is a 10-percent increase in gross sales at The Skylark Fine Diner & Lounge in Edison, N.J. That translates into a 200-percent return on investment, Katsifis said.

While independent, hotel and chain operators have long sought the input of fine-dining chefs—think Tyler Florence and Applebee’s, Jasper White and Legal Sea Foods, and a host of other luminaries like Wolfgang Puck, Paul Prudhomme, Bradley Ogden and Jacques Pepin—the recession has spawned a growing number of consulting unions, as circumstances bring the two parties together in the pursuit of income.

Upscale restaurants have been hit hard by the disastrous economy, forcing severe cutbacks and even closures. But lower-ticket chains have not been immune either and have been forced to pare back on expenses—notably within research and development departments—as they look to shore up their bottom line and wait for the turnaround.

As a result, along with Shelton, recognized chefs such as Mark Miller, Anita Lo and others are finding opportunities to share their culinary expertise with more restaurant brands.

“We have come out with some pretty amazing food between the two of us,” said Eric Justice, Pei Wei’s vice president of culinary. “Two palates are better than one.”

Miller is on a retainer with Pei Wei and meets with officials about once a month at trade shows, the company’ headquarters, in Miller’s 1,000-square-foot home kitchen or on culinary explorations in Asia.

Miller tastes most everything before it appears on Pei Wei’s menu and works not only at conceiving new dishes but also at improving existing items.

“He has one of the best palates in the industry,” Justice said. “We wanted an Asian expert in the R&D process to bounce ideas off of, to validate and to give some authenticity to the cuisine and what we do.”

One outcome of such brainstorming was a wok-cooked Thai mango chicken with fish sauce, kaffir lime, Thaichile paste, and chilelime spiced cashews. The limited-time offer sold for $7.50, including rice, and became a best-seller, Justice said.

Miller described his current status as “semiretired and in the third phase of my career.” As he explained, “first you learn, then you practice and then you sell your knowledge.”

The 60-year-old chef, who is based in New Mexico, has consulted at 52 companies, including Starwood Hotels, Darden, Coco’s and KFC. During his “practice phase” he owned and operated 14 restaurants on three continents. He was also one of the first U.S. fine-dining chefs to open a restaurant overseas, opening Zia in Tokyo in 1988.

These days, Miller eats at about 400 restaurants a year. Formally educated as a cultural anthropologist who specialized in Asia, Miller said eating food where it was conceived is important in recipe development because it helps chefs form a memory of authentic tastes. He visits Asia about a half-dozen times a year.

“My palate stays fresh,” he said, adding that being immersed in a culture helps him develop dishes.

“You have to understand and have the gestalt” of the place, he said, noting that being American gives him a “flexible” approach so he can adapt those authentic dishes for domestic taste buds.

Still, not every dish developed from this kind of collaboration works.

“In the beginning we had a chile-seared pork lettuce wrap with fish sauce, and guests kind of rejected it,” Justice said. “It was too aggressive.”

For his consulting work Miller said he’s paid at a rate “similar to a well-established lawyer or doctor,” although he would not elaborate. He also noted that as a rule his clients are not permitted to use his name in relation to any dishes.

Lo, chef-owner of Michelin-star-rated restaurant Annisa in New York, has turned her attention to a partnership with Kenny Lao of Rickshaw Dumpling Bar, also in New York, as her restaurant is rebuilt following a fire. Rickshaw currently has one store and one food truck but is looking to expand.

As part of the partnership, Lo offers her expertise in research and development. The key, she said, “is figuring out dishes that work doing 1,000 to 2,000 a day.” Her newest items are a braised pork belly bun filled with pickled cabbage and scallions and a bulgogi beef bun packed with pickled vegetables and spicy Korean chile sauce. Both are priced at $6 for two buns.

“Anita and I work collaboratively to ensure that new items are not only authentic in ingredients, but also accessible and consistently super tasty,” Lao said.

Lo added that developing items for a quick-service operation requires “a different way of thinking about how to produce food, and it definitely has its parameters. But it’s fun.”

“They tell us right away, and we listen to the guests to a great degree,” Shelton said.

Skylark’s new menu is one page and printed on paper, versus the more traditional plastic-covered diner tome. The new menu allows the cooks, including Shelton, who is cooking Tuesday through Saturday from 8 a.m. to 9 p.m., to work with seasonal ingredients. In addition to reworking the menu, Shelton expanded the wine offerings to take advantage of the beverage’s high profit margins.

“We put together a wine list of 100 really sexy things,” he said, pointing to a “really good Bordeaux and a rosé from Provence” that match the new dishes.

The result: Wine sales at the 280-seat diner skyrocketed from 1.5 percent of gross sales to 7.5 percent.

“We increased wine sales by about 500 percent,” Katsifis said.

Both Katsifis and Shelton say they plan to collaborate on fine-dining restaurants when the economy picks up. But in the more immediate future Katsifis plans to continue to employ Shelton.

“I hope we can have him as a corporate chef of our company,” he said.— [email protected]