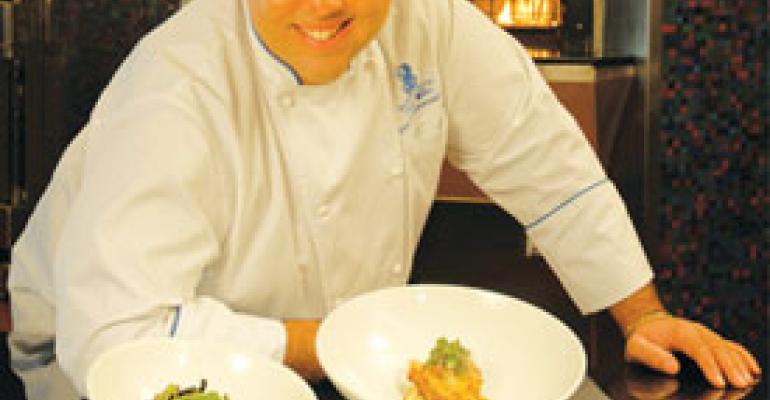 Under the Toque: Tony Miller credits family, mentors for development as a chef

Miller, who grew up picking fresh fruit from his family’s garden in Los Angeles, comes from a long line of cooks, chefs and restaurateurs. His family owns the venerable Harold and Belle’s Creole restaurant just off Crenshaw Boulevard, in his hometown. Other family members have cooked in or owned restaurants in New Orleans and in other towns in Louisiana. Miller says that from the earliest stages of his life he didn’t just learn to cook, he learned to cook well. If the scrambled eggs he made didn’t turn out, they went in the trash and he started over.

Attention to detail and a penchant for fresh ingredients have inspired Miller throughout his career. He has steadily worked his way up from a line cook at a Las Vegas casino hotel to chef de cuisine at a Maui resort. He says he’s made it a point to find good mentors along the way, from Roy Yamaguchi in Hawaii to Daniel Boulud at Café Boulud in Florida. He started working with chef Dean James Max at the Harbor Beach Marriott in Florida.

Max has opened three restaurants for Marriott, including Latitude 41 at the Columbus Renaissance Hotel in Columbus, Ohio. Max turned over the top toque to Miller when the restaurant opened in September.

As executive chef, Miller keeps his focus on fresh and local ingredients.

You’ve learned a lot from cooks in your family, but was it a difficult transition to professional chef?

I started out as a line cook at the Excalibur [Hotel and Casino, in Las Vegas]. I wear my head shaved now so it’s bald, but back then, I would try to pull my hair out every night. It was really hard, but every day it got easier. I learned so many different things.

What were some of the more valuable lessons you learned?

The main thing I learned in restaurant kitchens is speed. I learned you can have that same intensity you have in the home for great food done right, without cutting corners, but at a greater speed level.

I was in places where I could see the best chefs maintain the integrity of the food and do it quickly.

You’ve spent most of your career in hotel restaurants, and most recently with the Marriott. Do you think that helped accelerate your career as a chef in any way?

I started with Marriott [Ceres restaurant in the JW Marriott Summerlin Resort] as a line cook. Then I was a manager in training, then junior sous chef, banquet sous chef and the chef de cuisine of the restaurant. That process really set me up more quickly. Most places don’t nurture the talents of employees like that, I’ve noticed. Marriott is extremely good at maximizing the talent of its employees.

Chef Dean [James Max] has also been a phenomenal mentor. He helped me step up my career. I worked with him at the Harbor Beach Marriott. I was handling Dean’s bar menu.

I saw how he operated and what he knew about food and how he handled himself as a professional chef.

You’ve also spent time working for other chefs outside of hotels. What were those opportunities like?

When I left Maui, I had the chance to work with Daniel Boulud in West Palm Beach, [Fla.] That was unbelievable. I learned so much about being a great chef in that experience.

Given your experience, what do you think makes a great chef?

Organization. You’ve got to be organized. People throw you 20 balls and you have to juggle them at the same time. It takes a lot of dedication, a lot of passion, but a lot of it is organization.

How did you end up doing monthly cooking demonstrations on ?

A Web-posting board in Columbus that talks about things going on in Columbus. They approached us as the new restaurant. They thought a lot of people would be interested in seeing the recipes we do. You get to teach a little bit.

The response around town has been great. People see it and look forward to the next installment.

You’ve worked in some exotic locations. How do you like working in the Midwest?

I was surprised, at first, at how easy it has been to get fresh local ingredients. But this is the Heartland, where most of our food comes from.

We have great bison here. Pork and beef and sheep are raised locally, organically. As I order, that’s when they produce it. It’s not sitting around wrapped in plastic for a month. When you taste the food, you can taste the freshness.