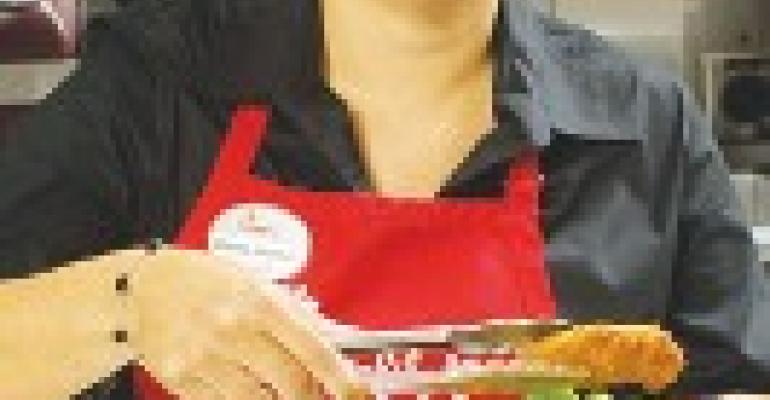 Before joining the Southern quick-service chain Chick-fil-A a little more than nine years ago, Shona Jonson had parlayed an early culinary interest into a career not as common as many imagined by those who wish to cook for a livelihood. Growing up in Georgia, she wanted to go to culinary school, but financial prudence begged her to study food science instead. After completing her academic studies—with a master’s degree in sensory science—Jonson worked for a while in the labs of ConAgra. From there, she joined Chick-fil-A, first as a consultant and eventually in her current role as manager of menu development.

When did you first realize you wanted to work with food as a livelihood?

It goes way back to being a little girl, 4 or 5 years old. When I used to play in the backyard, I would make “soup” with leaves, grass, what we called porcupine eggs—all these little things on the ground. I started working in the kitchen with my grandmother in Macon, Ga. We would do everything from plant to pick to preserve food, truly from the farm to the fork. I remember from a very early age picking okra, butchering hogs, canning and preserving figs. Then, at 14, I began to work at a Dairy Queen in Morrow, Ga. I was incredibly shy, and my parents felt like I needed to learn to relate to people. I worked there at least eight years and began to realize there could perhaps be a career in foodservice. I also took a home economics class around the same time and started to learn that there was a science behind making the kind of products I was working with.

What led you to go into food science as opposed to culinary school?

My No. 1 desire once I learned more about cooking was to go to culinary school, but I just couldn’t afford it. But I was able to start in food science at a local college. I majored in consumer foods and, when I graduated with that degree, I achieved a scholarship to go on and specialize in sensory science, a division of food science that focuses on the senses: how things taste, touch, smell and feel. There are lots of testing methods, whether you’re trying to match a product, develop a new product or determine the drivers of liking a product that already exists. It’s a fascinating field of study.

What do you feel your studies gave you that you wouldn’t have gathered on your own?

People always think about all of these things, but on a subconscious level. What [sensory science] does is allow you to bring the conversation to a conscious level. In terms of color, for example, people don’t always realize that they eat with their eyes before they eat with their mouth. If someone is looking at a piece of chicken, and it’s a yucky grey color, they’re not going to like that product.

Did you ever do experiments in school where you would purposely change the color of foods?

Yes! One of the most known tests that people do is to give people jelly beans of a certain color, but instead of tasting like fruits of the same color, they taste like spice. Then in other sensory testing, if they don’t want color to play into it they can use special color lights, where you can’t see the color of an item.

How much food science do you do in your role with Chick-fil-A now?

I came on as a technologist, but I don’t do much basic food science now. I’m much more of an applied-science kind of person, and I have to wear many hats: I may not know the answer to a question that comes up, but I have to know where to go to find that answer, whether it’s from academia or a supplier or somewhere else. I absolutely love being what I call the front end of the funnel. I love to create and to be creative. I’m an early adopter.

Chicken being so central to the enterprise, do you ever feel limited from a development standpoint?

We do chicken, and we do chicken well. We feel that it’s best to focus on what you do well, and we really don’t want to compete in areas where other people would quite frankly do better than us. Chicken is what brought us to the table, and we want to be known as America’s best chicken restaurant. What we like to focus on beyond that is having fresh ingredients. We like to make items from scratch whenever we can.

People partial to Chick-fil-A speak of it in hallowed tones. What is the secret to the chicken there?

Primarily it starts with a wonderful recipe that Truett Cathy developed more than 40 years ago. As part of that recipe, we start with a whole boneless breast of chicken and add special seasonings. We actually hand-batter and bread every piece of chicken served in a store, so it’s not a pre-breaded, par-cooked piece of chicken. We cook that in trans-fat-free peanut oil, which gives a cleanness and crispness to the flavor. And then one of the keys is serving it on a butter-toasted bun—and those two crucial little pickles.

Looking into the future, what is your main area of focus in terms of potential menu development?

I think one of the things we always want to do is to create foods that customers actually delight in. We just recently did one of the largest menu changes in our history. We revised our salads and wraps, changed our menu boards, and added a new coffee-caramel milk shake. As we looked at this new product launch, we had to decide, how can we respect tradition yet also move into the future? For example, we had a chicken salad sandwich that we had been serving for many, many years, and we knew that if we changed it that we would upset a lot of people. On the other hand, we knew that there had been a resurgence of popularity with chicken salad, so if we could revise and update that sandwich, we could capture new customers. What we ended up doing was to maintain the heritage recipe and put it together in a different way, on thick wheat-berry bread and with a serving of lettuce. We kept that product what I call “uniquely familiar,” and sales have far exceeded what we could have ever anticipated.

Your biography makes special mention of your Christian faith. How does that faith work along with the professed faith of Chick-fil-A as a company?

Our company’s corporate purpose is “to glorify God by being a faithful steward of all that is entrusted to us” and “to have a positive influence on all who come in contact with Chick-fil-A.” Our founder and the Cathy family choose to operate our business on biblical principles, which are time-honored principles that are great to operate a business by. For me personally, I believe that faith-based principles can be executed in any area of business you’re in. People enjoy being treated with honor, dignity and respect. People enjoy when you’re honest with them. I believe that one of the things that I’m called to do is to love all people, regardless of who they are or what they believe. Part of loving people is serving them, and one of the awesome opportunities I have here is that I can help people have a better life.