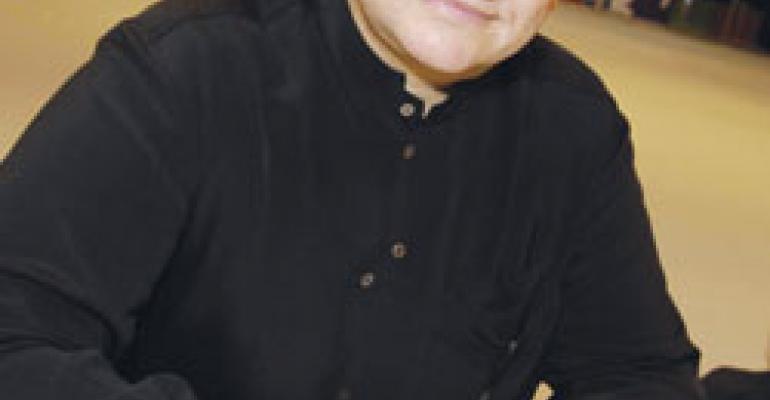 Under the Toque: Robuchon trades in Parisian Mecca for more relaxed dining

Chef Joël Robuchon “retired” a decade ago, but he keeps opening restaurants. Since closing his top-rated Paris restaurant Jamin, he has opened more casual, but still upscale, L’Atelier restaurants in eight locations around the globe.

He is in the process of opening a L’Atelier in Taipei, Taiwan, and discussing expanding his U.S. operations beyond New York and Las Vegas with possible outlets in Chicago, Miami and Los Angeles. In his new role running a mini chain he is happier than ever, he says, and learning more than during four decades of running a single kitchen.

In between openings he wrote a cookbook, “The Complete Robuchon: French Home Cooking For The Way We Live Now,” which was recently translated into English from French. The original version, with more than 800 recipes, was a best seller in France.

When are you really going to retire?

Now, I am retired. I only do what I like, and if I don’t like something, I don’t do it.

I am very happy now. I am not on my own. I have good partners. We are six altogether. It is easier to think with five others, rather than on your own.

What is it that you don’t like to do?

Interview with journalists. It is a very heavy job for me. I refuse all interviews on TV.

Why do you avoid being interviewed on TV?

Where is your next restaurant opening?

Job: consultant and partner in L’Atelier outlets in Hong Kong, Las Vegas, London, Macao, Monaco, New York, Paris and TokyoBirthplace: Poitiers, FranceEducation: helped cook as a child at Le Petit Seminaire, near Poitiers, and apprenticed beginning at age 15Career highlights: receiving three Michelin stars at Jamin restaurant in Paris the first time in 1984, being dubbed “Chef of the Century” in 1989 by Gault Millau

I am planning on opening one this year. We are proceeding with a plan for around mid-May or June in Taipei, Taiwan.

Do you expect to open more restaurants in the U.S.?

We have a lot of plans, but we are on standby for Miami, Chicago and L.A. for the moment. Because the expansion in the last year was very fast, we have to digest that. And of course it may not be the best time economy-wise to open.

I am very relaxed. Before I was under pressure morning to night. Now I take it easy, and I have been learning more in the last 10 years than the 40 years at the stove by traveling and seeing different cultures.

Why did you write a cookbook at this point in your career and why was it translated into English?

Today I think this works. Many people were asking me to make a book that is understandable for customers and friends.

In the beginning it was for the French public, but when people came to France they asked for it in English, and it will be published in Japanese and other languages too, because people are asking for it.

Would you discuss the cover design of the English version of your book? Does the black and white have some kind of significance?

I didn’t design it. The editor gave me a few choices. I picked this one because it was not complicated. It was simple, and the symbol of the whisk and egg whites were significant.

The whisk and egg whites signifies working in the kitchen.

Who is the book written for: home cooks, aspiring chefs, established chefs or everyone?

Not for the professional. The book was made for a wide public. But it can always be used by professionals. The recipes are easily reproducible with simple applications. I tried my best to make it understandable for everyone.

Are the recipes examples of how you cook at home?

It certainly is the spirit of how I would cook at home, but I am not often at home to cook.

It is a medley of recipes I like at home and in the restaurant.

For mashed potatoes use a food mill or potato ricer and then dry the potatoes in a sauce pan, stirring vigorously with a wooden spoon. After adding butter and milk, finish mixing with a whisk for a lighter texture.

In the mid-1980s when I did a stage with you at Jamin in Paris, I remember a coconut ice cream you made by freezing just a can of coconut cream in an ice cream maker, but I don’t see that recipe here. Did I remember that right, and why was it left out?

Don’t you use equal amounts of butter to potatoes for your mashed potato at your restaurants?

It is usually 1 kilogram of potato to 250 grams butter.

Why are there no pictures in the cookbook?

So they do not intimidate people.

Is there something you care to talk about that I didn’t ask?

I am very pleased with the success of L’Atelier around the world because I feel the concept fits clients’ expectations. They do not want to go to church for a meal. They want it all over the world. We have been asked to open a lot of L’Ateliers.

What’s nice is when people come by and say, “You make me feel like I am at your home.” It is not like at other restaurants. People feel like they are coming to my home.