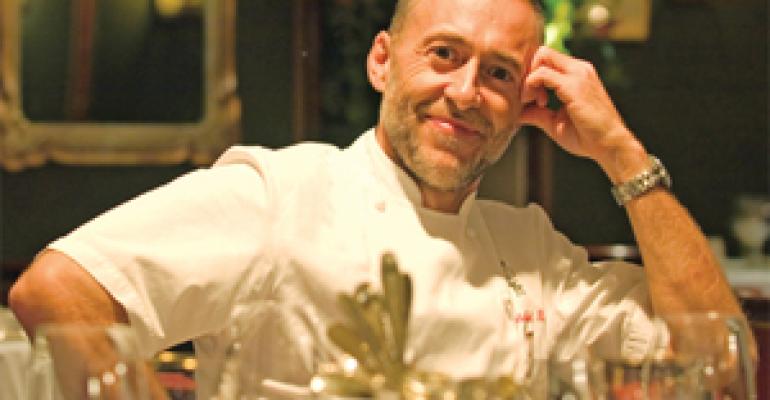 Le Gavroche was opened in 1967 by brothers Albert and Michel Roux. In 1974, it won its first Michelin star, and in 1982, it became the first British restaurant with three Michelin stars.

Since then, it has continued on that trajectory, earning numerous awards and prestigious rankings along the way, and today Albert’s son, Michel Roux Jr., carries on the legacy.

An avid marathon runner, the younger Roux is married to a French woman and has a 16-year-old daughter who often cooks with him for big events and is considering catering school. He also has written four books, including “Vins de Constance with Michel Roux Jr.,” which was named the best book on matching wine and food at the Gourmand World Cookbook Awards.

You were a young boy when Le Gavroche opened. How do you recall growing up in that environment?

I remember the original space in South London. It had a badly lit corridor going to the kitchen that was like going into a dungeon. You could feel the heat and the intensity. I have very vivid memories of venturing in, with childhood trepidation, to say hello to my father, and seeing these people rushing around in white and him in full swing. I think that was imprinted on my mind, the smell, the sounds, the heat. It was very intriguing as a child. Still is.

How did your family keep it going?

Forty years in the life of a privately owned restaurant, which has maintained its standards, is very long—especially as the average life of a London restaurant is four years. We stick to our beliefs: classical French food and respect for perfect, wonderful ingredients.

Iread that your father cooked and your mother went to Paris for the produce.

That’s right. Certain items such as foie gras, specialty chicken, milk-fed veal, even olive oil, were not available in England. The only place you could get olive oil was at the chemist: It was used to unblock your ears. She occasionally got stopped by customs coming back. We take it for granted now, but in London in the 1960s and even early ’70s, it was impossible to get certain fine produce.

Title: chef-owner, Le Gavroche, LondonBirth date: May 23, 1963Hometown: LondonCareer highlights: taking over Le Gavroche from father, Albert Roux, in 1991; writing and publishing four books; being voted No. 28 in the 2007 San Pellegrino World’s 50 Best Restaurants; being named the Most Consistently Excellent Restaurant at the 2007 Tatler Restaurant Awards

What have been the most important business challenges?

We’ve had plenty over the years. We’ve had recessions, depressions, something that was called the Winter of Discontent, when all social services went on strike—[garbage] bins were not collected for something like three weeks, we had electrical power cuts, the morgues were overflowing—it was a terrible time. We’ve been through that, through IRA bombings, huge financial crashes in the City, the recent bombings. But Londoners are very resilient and have an attitude that life should go on, that we should carry on. There is a certain stoicism. Because of that, and because of our loyal core of British customers, and because we know how to keep them. We have kept going through thick and thin.

How was it working with your father?

Not easy. Taking over is never easy, and if I look at the flip side of the coin, giving it up is never easy. There were times of friction, but we never really fell out, because there was one aim, and that was to carry on in the best way.

Are there other family members involved?

What’s the core value of your business?

The core value really is the longevity, customer care and making it a vital experience so customers want to come back.

How do you modernize the cuisine while retaining your regulars?

It’s definitely not something that happens overnight, as then you would alienate your core customers. But the worst thing that can happen to a restaurant is to stagnate. We don’t follow trends, per se, but we do have to stay with the times. We’ve stayed faithful to our roots and kept up-to-date.

How do you maintain consistency at this level?

What do you love most about this industry?

Giving satisfaction. It’s a very rewarding profession. The reward is making people happy and achieving that through cooking and service.

What would you like to tell someone coming into the industry?

It’s a very intense job, but very rewarding. Be inquisitive and never give up.

Tell me about your charity work.

All money that I raise through my marathons and through any donations goes to VICTA [Visually Impaired Children Taking Action]. I wanted a charity for children and a small charity, as I think a higher percentage goes to the cause. The visual aspect is near to me as I have problems with my eyes. I think it’s a great cause.

What’s the best advice your father ever gave you?

To start my career with pastry, as opposed to in the kitchen. Pastry is more of a discipline, and it instills vigor and precision into your work. It’s more weighed and measured, almost chemistry. [Savory] cooking is more about flair and spontaneity.

To peel quail eggs quickly, cook them, then soak in vinegar until the shells are pliable.

What do you think about food miles?

Carbon footprint and green taxes and so on—to me, it’s just another way of raising revenue, and it’s the buzz word. What I will say is that if we stick to seasonality, then food miles automatically become less.

You’re French, raised in one of London’s finest French restaurants. Do you consider yourself French or English?

It depends which side is winning—I’m answering that as a football question. It’s difficult. I do feel very British, but there’s no denying that I’m still French, and I do have very firm French beliefs about food.

Who is your favorite character, living, dead, or fictional?

The old man in the Ang Lee film “Eat Drink Man Woman.” It’s absolutely stunning, about a father who raises his daughters at home and does all the cooking. He’s a chef by trade, but lost his sense of smell and taste. It ends well, but there are moments that are so real it’s amazing, you can almost smell the food.

Where do you plan to be in forty years?

On a little island in the Indian Ocean grilling lobsters.