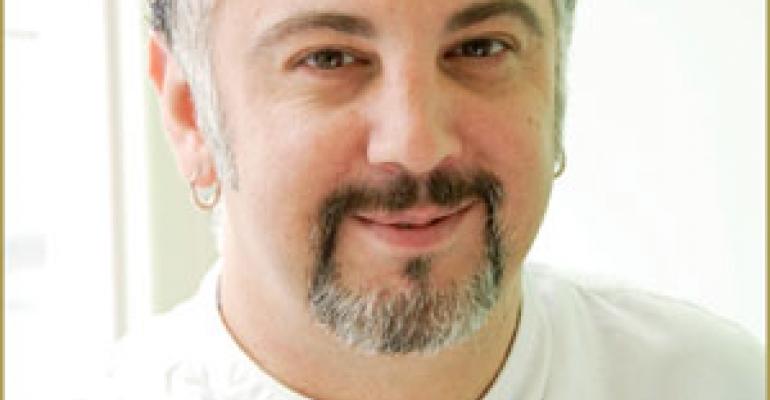 Under the Toque: Hanna finds a sweet life with a dessert shop in The Big Easy

Tariq Hanna has gone through several life changes. Born in Nigeria, he went to a posh boarding school in England before moving to the Detroit suburbs to study architecture. But once there he ended up studying cooking instead.

Although he had some formal training, Hanna learned many of his skills on the job, at country clubs and catering houses. After completing culinary school he worked as a breakfast cook in a diner and also took the graveyard shift at a Dunkin’ Donuts.

Drifting toward the pastry side of the business, he opened his own shop, selling pastries, wine and gourmet takeout items at Northville Gourmet, in Northville, Mich.

After five years of that and “some major burnout,” he closed up shop and moved to the savory world as executive chef and general manager of McKinnon’s, also in Northville.

Then pastry called again, in the form of MotorCity Casino, a Mandalay Bay property in Detroit, which hired him to be pastry chef. Hanna became involved in competitions through the American Culinary Federation and others. He made television appearances and taught at his alma mater in his spare time, and his career looked bright.

But an infatuation with New Orleans lured him away from that. The Big Easy had an inexplicable attraction for him and his future wife, Jennifer. After seven years, he gave two weeks notice to his bosses at MotorCity and moved to New Orleans to work with veteran restaurateur Joel Dondis. They opened a dessert shop called Sucré in June. Hanna also says his work as a teacher transformed his management and taught him to have more fun.

Why did you move to New Orleans after a hurricane nearly destroyed it?

But it didn’t destroy it, and that’s very simply the attitude I have. I’ve always had an affection for the city. Every place else in America has to be big, gleaming, glistening, brand new. There’s a certain antiquity to New Orleans, a certain seediness and dirtiness to it.

And I don’t know if any other part of this country has its own indigenous cuisine that truly is an ingrained part of its culture.

They take their food so seriously here, yet they’re also very light-hearted about it. The food here is very festive.

When I met my future wife, it turned out that she was so enamored of the city that a month after she came here for the first time, she came back and bought a condo.

How did you two meet?

Through a friend who was at my house designing a show-piece for a competition. A week after we started dating, I was in Atlantic City by myself, in the national bread and pastry competition, completely freaking out because three days before my teammate [the baker] bailed on me.

Jennie flew out to support me and sat in front of my kitchen for 13 hours. I realized that if anyone would do that for me, I had to marry her.

We came down here and got married. We sold the condo before Katrina hit because we were planning to buy a place for ourselves. After the storm my wife was a complete wreck because she’d finally found the person to move here with her, and it looked like it might never happen.

I said: “An earthquake hits Los Angeles, do you think Los Angeles will go away? Planes crash into New York, what are you going to do, shut New York down?”

Everyone just needs to look beyond the tragedy.

Why did you want to learn to make doughnuts and train as a short-order cook?

One of the great lessons I learned from my dad was that work is work, no matter what it is, and none of it should be beneath you. If Sucré failed, I would be next door at the Chinese restaurant washing dishes, if that’s what paid the bills.

My dad also said you never know what you want to do until you’ve done it. I like doughnuts. Who doesn’t? I wanted to see what they were all about, if the commercial of waking up at 3 in the morning and saying, “Time to make the doughnuts,” was true.

Absolutely. It was so much fun. The guys I worked with were crazy punk-rock kids, and we all fit in very nicely together. I also always knew that I wanted to own my own business, so I had to learn everything.

Apinch of cinnamon brings the flavor of pistachios to life.

What did you learn as a short-order breakfast cook?

Not to piss a waitress off. But also the importance of retaining information. Working on the line were me and one other person. He did all the eggs, and I did the sides and the waffles. He had 18 burners going at the same time, and he kept track of everything. He knew all the sides without looking at the tickets. I remember the first three days I was lost in the first five minutes, and he told me: “Calm it down.… Don’t get stressed out before you start. You know how to do this, you know the menu, you know how we work. Just relax.”

That’s why I refuse to work without music, and I don’t like working when it’s quiet in the kitchen, because I find it very sterile, and I don’t really concentrate well like that. Most people need quiet to concentrate. I need noise.

Has your goal of being kind to others always been part your management approach?

You don’t have to be a jerk to people, but I was for a while. I think a lot of that was because I was not in a good place personally, and that’s why I got out of my own shop. I was miserable, I had no quality of life.

I kind of did a 180 and decided I was going to start ruling with humor. Everybody realizes that my favorite source of humor is myself. We keep the music on, we keep it lively, and we have a good, fun time in the kitchen. It gives you a reason to want to come back.