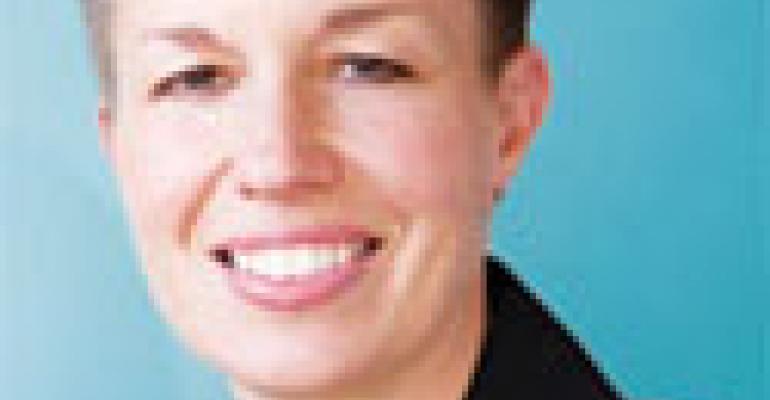 Under the Toque: Falkner blurs line between savory and sweet

Elizabeth Falkner’s educational background may explain, at least in part, why she likes to think outside of the box. After graduating from the San Francisco Art Institute in 1989, she initially intended to make experimental films. But a part-time restaurant gig soon turned into a full-time culinary career, and now she uses that same kind of creativity to deconstruct, transform and evolve dishes.

After working as pastry chef at some of San Francisco’s most renowned restaurants, including Masa, Elka and Rubicon, she set out to open her own pâtisserie, Citizen Cake, in 1997. In 2000, the pastry shop moved and expanded into a full-fledged restaurant. Today her career includes another restaurant, Orson; a cookbook, “Elizabeth Falkner’s Demolition Desserts: Recipes from Citizen Cake”; and frequent television appearances.

How do you maintain a balance between your businesses and media appearances?

Obviously it’s all very time-consuming work, [but] I never think about it like that. The TV doesn’t take up a lot of time, and it’s interesting. I just put 100 percent into it when I’m doing it. Writing a book, that was pretty massive. But running around to all three restaurants is totally exhausting, crazy and fun at the same time. I have amazing teams at both places and in the bakery too. I try to be their cheerleader more than anything and make sure they’re excited about it. I keep trying to light the fire for them.

When did you shift your focus from just doing dessert to adding savory dishes also?

When we moved Citizen Cake to Hayes Valley in 2000. The original pastry shop was not a place you could serve dinner, but we served lunch there because we had a wood-burning oven. The savory side has always been a part of my thing anyway. I’ve always incorporated a lot of savory stuff into my sweets, and [while working as a pastry chef] I also paid a lot of attention to the other chefs around me.

Can you give me an example of savory elements you incorporated into your sweets?

I’ve always had corn in my desserts when corn was in season, like corn ice cream. I’ve done a million things with goat cheese and dessert. That’s hugely dated to me now but at the time….

You know there is a lot of sweet-savory food out there. When I worked at Elka, it was a Pacific Rim restaurant, so a lot of our food was very sweet. But my desserts weren’t overly sweetened, [which is] the same as you would find in Japan or China or Southeast Asia. There you don’t necessarily find supersweet stuff, you find refreshing stuff for dessert. I’ve always liked that balance from the beginning of dinner to the end and not just in specific courses. I also very much like salt in my sweets: That’s always been a way to pronounce flavors. For example, [using salt] in contrast to brown sugar, or just think of bananas with a little salt, and certainly anything cheesy.

Do you also find that the pastry ideas get into your savory food?

Oh, definitely. We’ve been doing all kinds of creams and mousses and emulsification forever in the pastry world, and these things absolutely [have a place] on the savory side of the menu. One of the things that has been really successful at Citizen Cake is doing a savory ice cream with a protein-centered main course. I’ve done a total twist on Buffalo wings, but more sophisticated, by taking a galantine and a ballotine of some different chicken, which is then fried and served with some really crazy, spicy sauce, blue cheese ice cream and celery leaves. We do steak sometimes with horseradish ice cream, or blue cheese ice cream, or sometimes a béarnaise ice cream, which is really awesome. I love that combination. At first people were, “What do you mean, ice cream?” But now they say, “You have to go there and have that ice cream.”

How did you decide to open your second restaurant, Orson?

My partner [Sabrina Riddle] and I were looking for a space to potentially move some of the bakery production out of Grove Street, where Citizen Cake is, and she happened to come across a building that was really cool and beautiful and gigantic and just too big just for the production. But honestly when we both walked into the Orson space, we were like, OK, we have to build a restaurant here.

How are the restaurants different?

Orson is a bigger restaurant. It has a really amazing kitchen, a huge bar, and a banquet and private dining space. It’s a different crowd too. At Citizen Cake in Hayes Valley, we’ve got people going to the ballet, symphony and opera. It’s kind of a mixed audience and a lot of older people. In the later part of the evening, it’s a lot of kids that come in. Orson has a much more clubby atmosphere. It’s in the South of Market—next to it used to be the Trocadero—it just feels like you’re in an industrial club area.

Think about something classical from anywhere in the world, and consider how you can really express its flavors, change some of the textures and put it into a different context. For example, you could take squash ravioli and transform it into a pizza covered with squash purée, ricotta, sausage and fried sage. Or imagine how you could change it into a dessert.

One of the things you’ve been able to do at Orson is special events like your monthly cocktail pairing menu where you match several courses featuring the same ingredient with a cocktail.

It’s really fun. When we opened, we wanted to do some different types of dinners and maybe attract some customers on slower nights. There was also a cocktail week or month going on at that time in San Francisco, so we put together the first [cocktail pairing menu], which was bourbon and bacon. It was just a really big hit; people loved it.

Then we were like, OK, what can we do next month? We’ve done different ones that have been really awesome. We’ve done a tequila, tomato and corn [menu], and we did another pig and whiskey one.

People really dig it. The first one we did, I think people got kind of hammered. The pairing is more about how can we make this more of a symphony. The point isn’t to get you smashed; at least you want to remember what you ate.