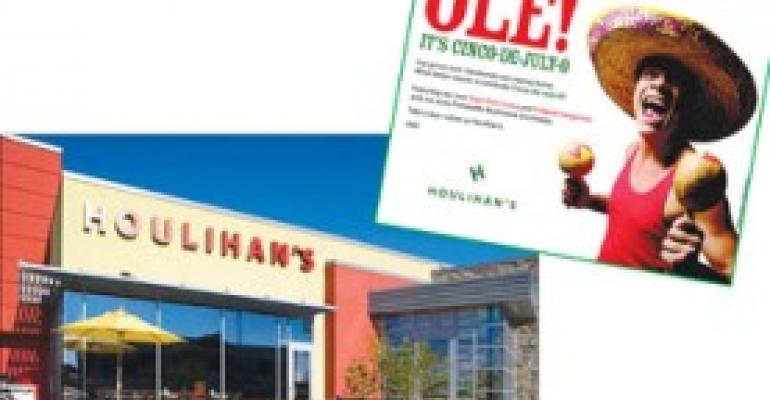 Now more than ever, creative advertising and innovative promotions are the keys to bringing cost-conscious diners into casual-dining restaurants, according to marketing executives for chains in the segment.

The obvious reward is a quick sales increase, and the longer-term benefit is an opportunity to stay top of mind with consumers so that when they become a little freer with their spending, they’ll remember the restaurant that gave them something special.

That was Houlihan’s goal when it held a “Cinco-De-July-O” promotion targeting consumers who canceled vacation plans because of high gas prices and wanted some sort of celebration to make up for that.

The Leawood, Kan.-based chain, which has more than 90 units, sent e-mails to the 350,000 consumers in its database on July 3 to promote new beverages and a vegetarian enchilada. Houlihan’s timed the promotion to see how it would affect sales during the normally slow Fourth of July holiday period, said vice president of marketing Jen Gulvik.

The result: sales up nearly 26 percent on July 4, compared to the previous year, and a 16.4-percent sales increase on July 5.

The promotional material didn’t even contain a price-point offer. It did show a zany character wearing a sombrero and holding portobello mushrooms for maracas. A copy block read in part, “Gas prices suck.”

“It was more of an awareness message,” Gulvik says. “I think the creative message resonated with consumers such that Houlihan’s was memorable and top of mind to help our typically slow July 4 weekend sales.”

Houlihan’s also hopes to increase its bar business with the return of “Mini Mondays,” which offers mini burgers for $1 each. The burgers usually come in a flight of three, but when the chain unbundled them for a promotion in March, bar sales increased 22 percent year-over-year and 16 percent compared with the previous 12-week period, officials say.

Although $1 burgers can be considered a value offering, Houlihan’s tries to steer clear of discounting because it erodes brand value over time, she says. Some discounting “can be good and appropriate,” but the chain would rather target consumers with a new daypart, specifically brunch, which it’s testing in five restaurants, Gulvik says.

That opens a new revenue stream for Houlihan’s without resorting to discounted meals to increase customer traffic, she says.

Other casual-dining chains have been forced to adjust their marketing efforts because of the economy.

In May, Applebee’s invited consumers to submit their own videos showing the “great times they’ve had at Applebee’s.”

The new campaign focuses on the chain’s soft rolls as the starting point of an enjoyable meal. TV spots show people in embarrassing situations who find relief when a hand appears out of nowhere to offer them a basket of rolls.

The Cheesecake Factory Inc. is poised to place more emphasis on marketing in the midst of a management shakeup at the company following a steep drop in profits and a warning of further same-store sales declines. The company created the new position of senior vice president and chief marketing officer and hired restaurant industry veteran Mark Mears to fill it.

Using its 15th anniversary this year as the starting point, the 89-unit chain offered a specially priced menu and handed out “party favors” in the form of meal deals to bring customers back for a second visit.

As part of the celebration, the chain staged a wedding vow renewal night July 23 at its original Minneapolis restaurant. Seventeen couples renewed their vows in a ceremony covered by local TV. Other restaurants in the chain held parties that night, though not on the same scale, says Jim Macchitelli, vice president of marketing.

The wedding vow ceremony and 15 percent discounts on the anniversary menu were a way to “have a little fun,” he says, but “the whole thing working together is designed to replace our traditional couponing strategy.”

Buca di Beppo has used direct-mail couponing “pretty consistently to drive traffic,” he says, but now that “everyone’s couponing,” the chain’s efforts are less effective in light the increased competition.

“We felt like we needed to do something different to rise above that clutter,” Macchitelli says.

The different aspect this time was using the anniversary menu as a hook to get people in the door and then giving them discount coupons in sealed envelopes to be opened in the restaurant on their second visit. Customers have until Sept. 28 to redeem the coupons.

“What we wanted to do was get the people who come in once this quarter to come in twice,” Macchitelli says.

The menu contained 15 of the chain’s most popular items, including fried calamari, spaghetti marinara and chicken Marsala. The coupons included free menu items, a party for 15 customers at the Pope’s Table and a party for six at the Kitchen Table. The grand prize is a trip for four to Italy.

The menu items sold well, Macchitelli says, but because they are the most popular dishes “it’s not a stretch” to believe that they would.

Beef ‘O’ Brady’s Family Sports Pub, based in Tampa, Fla., with more than 250 units in the Southeast and Midwest, has always targeted families and will continue to do so, but it expects to expand its beverage program to focus on family members who’d like an adult drink with their meals.

Beef ‘O’ Brady’s traditionally has served only beer and wine in its restaurants, but 15 units are testing a full-alcohol program, and “we have gotten some great results,” says chief executive Chuck Winship.

Operators are pushing to have the program roll out systemwide, he says.

“It’s a big move for us,” Winship says, and Beef ‘O’Brady’s will ensure that it maintains a family image by not selling shots of liquor or encouraging heavy drinking. The goal is to offer alcohol as an “accessory to food” and eliminate the no-vote when a member of a dining party resists going to Beef ‘O’ Brady’s because it doesn’t serve liquor, Winship explains.

Systemwide restaurant sales started off “a little slow” this year but improved somewhat during the second quarter, he says.

The chain offers smaller portions of meals at lower prices in a number of its locations, but “we are very adamant that we don’t cut portion size or quality with existing items,” Winship says. “You create value with new arrangements that consumers will sample.”

The chain historically has been “very reliant” on using cable TV for advertising and still likes the medium, Winship says, but “in times like these you have to challenge the old way of thinking.”

Chief marketing officers are devoting more attention to their media-use habits, whether they decide to maintain current TV budgets or spend more money online or on direct marketing.

At the same time, they’re taking a closer look at the creative elements of advertising because “all brands are searching for a creative home run,” Dahlen says. They’re hoping to emulate the current success of Subway’s ads featuring Jared Fogle or the classic “Where’s the Beef” campaign that Wendy’s aired in the 1980s.

Houston-based Joe’s Crab Shack is airing a TV campaign that has a different style and tone than previous ads, says Robin Ahearn, vice president of marketing and menu for the 120-unit chain.

“We’re a little bit of an irreverent brand, and we had an opportunity to show what we’re all about,” she says. “We’re not trying to be like anyone else.”

Working with Dallas ad agency Slingshot, the chain developed a “Summer Buckets” TV campaign to depict how buckets of barbecued Dungeness crab, peel-and-eat shrimp, mussels marinara and cold beer can bring people together for a good time. That includes a priest dining with the devil and a police officer sharing a meal with a criminal.

The tone of the campaign is based on consumer comments, which revealed that diners like Joe’s because they say it’s a place to “escape my worries,” Ahearn says.

“They love to come with family and friends and kick back,” she says.

Unlike other casual-dining chains, Joe’s has not suffered a sales drop or decrease in customer traffic because of the poor economy, Ahearn says. In fact, the economy probably has helped bring customers in, she says.

People who can’t afford to take vacations this year view coming to Joe’s as the next best thing because of the restaurant atmosphere. They can wear tank tops and flipflops and relax on the deck as their children romp in the playground, Ahearn says.

So far, Joe’s has experienced a “very positive response” to the Summer Buckets promotion, she says.

For Red Robin Gourmet Burgers & Spirits, based in Greenwood Village, Colo., the TV ad strategy it used last year for its first national cable TV campaign is the one it will use through the end of this year, says Susan Lintonsmith, chief marketing officer of the 400-plus-unit chain.

The campaign, created by G&M Plumbing of Manhattan Beach, Calif., showcases the products coming out of the “Department of Deliciousness” and does “a really good job” of promoting the chain’s “craveable burgers,” she says.

One spot shows a guide leading consumers on a tour of the department and promotes the Whiskey River BBQ Burger. One visitor can’t resist the burger, resting on a pedestal and seemingly ripe for stealing. But as the visitor lunges for it he encounters an electrical fence and an invisible wall protecting the burger.

TV and the Internet are the chain’s primary media. Banner ads are a “huge component” because “our guests tend to be on the Internet,” Lintonsmith says.

Getting product messages in front of consumers isn’t more difficult because of the economy, she says, but it is more complicated.

“I think it’s easy to reach them to reinforce your messages,” Lintonsmith says. “The challenge now is as their pulling back [on spending] there’s a lot of competitors out there trying to drive them in with deep discounts. It adds noise and clutter in the market.”

Instead of discounting, Red Robin offers “bottomless” fries and beverages with meals, and “we make sure [customers] know about our bottomless equity,” she says.

However casual-dining chains promote value, it’s something that definitely belongs in their advertising, says Dahlen of Nielsen IAG.

Chains need to “dial up value messaging” because consumers have less money to spend and want to know that they can get increased value when they go out to eat.

Whether the ads are consumer generated or follow the traditional approach of food shots and voice-over, he says, “you’ve got to put in a value message.”