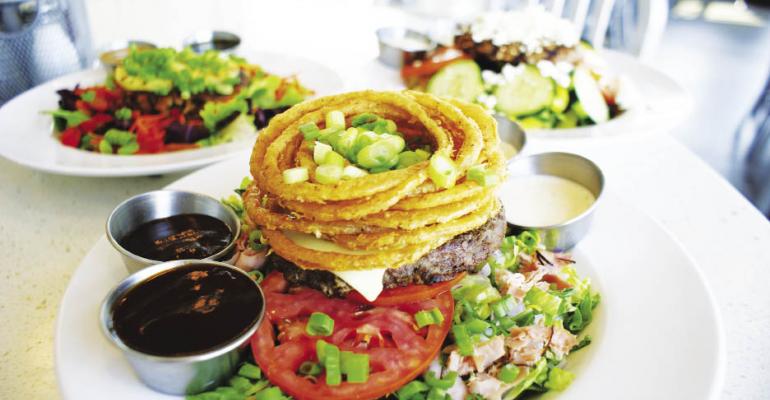 Chefs and research and development executives, eager to stand out in the crowded burger market, may continue to build bigger, better and more unusual burgers. But they also warn not to lose sight of what customers really want.

Michael DeFonzo, chef of P.J. Clarke’s in midtown Manhattan, found that out the hard way. He upgraded his burger’s ordinary yellow American cheese with a more expensive mild white cheddar and replaced what he called a “standard, high-sugar, processed white bun” with an “artisan white-bread bun.”

Guests’ reactions “were borderline violent,” DeFonzo said. “They hated, hated the [fancier] bun, and they wanted their processed cheese back.” Within about two months the “plain old hamburger” was back.

The restaurant, one of four P.J. Clarke’s locations, serves about 4,500 burgers a week. The cheeseburger sells for $10.20.

P.J. Clarke’s isn’t alone in its burger trial and error. Restaurants are aiming to strike a balance, incorporating exotic ingredients without turning their back on the simple flavors that make the burger a classic. For many, that means offering a variety of mix-and-match patties, buns and toppings to let guests control how adventurous they want to be.

Any way you want it

“Customization is the key to what we’ve done,” said Jeff Weinstein, founder of The Counter in Culver City, Calif.

chain’s classic Old-School Burger, which “gets boring after a while,” can be dressed up in “tens of millions” of ways, he said. Bison patties and such toppings as pesto, Brie and feta are among the options. About 80 percent of his guests customize burgers, he added.

Build-your-own-burger bowls were popular for a long time at The Counter’s 26 locations, but the chain recently added signature bowl combinations on menu boards. The bunless burger, which is similar to a salad, already makes up about 20 percent of all burger sales, Weinstein reported.

At Lake Forest, Calif.-based Johnny Rockets, the Original burger, $5.99, remains a best-seller, but Tim Hackbardt, senior vice president of marketing for the 287-unit chain, said the company is testing new buns, sauces and even cooking methods to spruce up its basic burger.

“It’s all in development,” Hackbardt said. “We’re fixated — no, we’re more obsessed — with delivering a surprising experience. You have to have something interesting that [diners] can’t get anywhere else. ”

Hackbardt’s meticulous approach included sending a colleague out to 20 rivals to photograph hamburgers “at the exact same angle and distance.” When the photos were hung next to images of Johnny Rockets’ burgers, he clearly saw that there had been “a lot of innovation by our competitors over the last couple of years.”

Flavors of the future

Modernization is a concern for customers at Red Robin Gourmet Burger as well, and the chain is turning to its younger customers to find out what flavors are on the rise.

“Guests want more choices,” at Red Robin Gourmet Burger, said corporate executive chef Dave Woolley from the chain’s corporate offices in Greenwood Village, Colo. “Ethnic flavors [are] continuing to rise. Almost anything goes with artisan cheese and buns. And I can see a usage of baby vegetable and heirloom tomatoes, onions and beans.”

He also predicted street foods “can easily be transformed into a burger,” with options like naan bread.

He gains perspective on the future and what young diners now enjoy by studying the results of Red Robin’s annual recipe contest for kids. This years’ winner, a spicy honey glazed bacon burger, is in participating stores this month through Sept. 12.

The winning young recipe developers “are the trendsetters,” Woolley said.

But even as some brands are letting guests set the tone, others continue to turn out eye-catching signature burgers. This summer Carl’s Jr., based in Carpinteria, Calif., tested a foot-long cheeseburger with three patties on a 12-inch hoagie with lettuce and tomatoes for $4-$4.50. Earlier this year the chain also rolled out the Grilled Cheese Bacon Burger with four slices of melted American and Swiss cheese on grilled sourdough bread and one to three patties. Depending on the location and number of patties, the sandwich sold for approximately $2.49 to $4.49.

Similarly, Friendly’s, which is based in Wilbraham, Mass., introduced the new Grilled Cheese BurgerMelt at its 500 restaurants. That item features a patty, lettuce, tomato and mayonnaise between two grilled cheese sandwiches. It debuted at a discounted promotional price but now sells for $8.49.

Chef David Burke is working on an attention-grabbing hamburger for New York City’s Bowlmor, where he is a menu consultant. Richard Pims, who is the opening chef at a planned Bowlmor location in midtown Manhattan, said it will be called the Bowlmor Bob Badass Burger. It will include a 7-ounce beef patty, chipotle shrimp, bacon and cheese and will be served with lemon pepper fries. A price for the burger has not been determined.