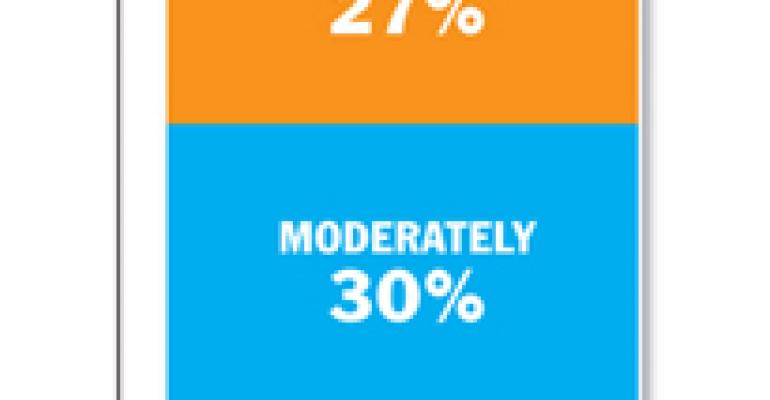 Growing concern about trans fat in foods has several legislatures and foodservice operators taking swift action to ban the substance, but consumers still are not making dining choices based on the potentially harmful fat.

While consumers say that they are more aware and concerned about trans fat, so far that concern has not motivated them to eliminate it from their diets—especially when dining out, according to a recent survey by The NPD Group, a Port Washington, N.Y.-based global market research firm.

“People’s perception and the reality is a disconnect,” said Bonnie Riggs, restaurant industry analyst for NPD.

Riggs cited a 2003 report from the Food and Drug Administration that revealed that 40 percent of Americans’ daily intake of trans fat comes from food items typically consumed at home, such as cakes, cookies, crackers, pies and bread. The report also showed that 17 percent of daily trans fat intake comes from margarine alone.

But increased knowledge of trans fat doesn’t necessarily lead to a change in behavior. Despite being informed about the dangers of trans fat, not all consumers are motivated to alter their eating habits, NPD reports.

“[They are] young and don’t have to worry yet, or so they think,” Riggs said.

“What people say and what they do are different,” Riggs said.

Consumers behave similarly at home. According to NPD, when consumers read nutrition information on packaged foods, most are inclined to look at figures for “total fat,” along with “total calories” and “sugars.” In a ranking of items that consumers usually look for on labels, trans fat appeared 12th. The FDA began requiring last year that trans fat content be listed as part of the nutrition information of packaged foods.

Consumers may be reluctant to alter their eating habits, but they may soon be without a choice. New York in late 2006 became the first city to ban the use of trans fat in restaurants, and other cities are considering similar legislation. In addition, a growing number of chains voluntarily are making the switch to nonhydrogenated cooking oils, which cuts trans fat content.

“The decision is being made for consumers,” Riggs said. “The question remains, ‘What is the cost to operators’ sales and consumers’ satisfaction?’”

Similarly, the impact on sales and consumer satisfaction remains to be seen.

In August, after two years of research and development, Dublin, Ohio-based Wendy’s switched to a nonhydrogenated cooking oil for its French fries and breaded chicken items in all 6,300 of its U.S. and Canadian restaurants. The move has significantly reduced the trans fat content across the chain’s menu.

“We’ve had very positive comments,” said Bob Bertini, a spokesman for Wendy’s. “Many customers say there is no difference in taste.”

While Bertini says Wendy’s can’t break out the impact, the No. 3 burger chain’s domestic same-store sales were up 1.8 percent in October, the chain’s fifth consecutive month of positive same-store sales.

San Diego-based Pat & Oscar’s introduced a trans-fat-free menu in June 2006. The change affected just four menu items, although one was the company’s signature hand-rolled breadsticks. After six months of research and development, the 17-unit fast-casual chain discovered a recipe that it says is both trans-fat-free and appealing to consumer tastes.

Although John Wright, the chain’s chief executive, said it was too soon for any metrics, anecdotally the change has been very well-received and sales have been positive for eight consecutive quarters.

Calabasas Hills, Calif.-based The Cheesecake Factory, which also began removing trans fat from its menu in June, said it has not experienced much consumer reaction at all.

“We got so few questions on this,” said Howard Gordon, senior vice president of business development and marketing for the 123-unit chain. “Consumers can’t tell the difference.”

Although early reports indicate a positive consumer response to trans-fat-free foods, operators who have not begun eliminating trans fats may still be vulnerable to backlash, Riggs said.