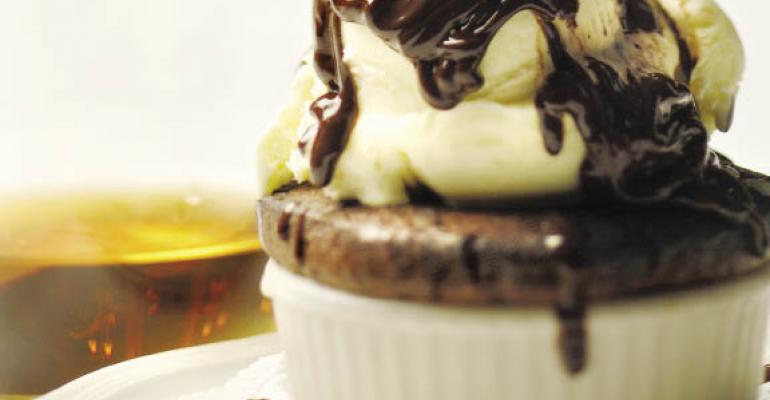 When it comes to offering guests something sweet at the end of a meal, you don’t have to reinvent the wheel.

But a little tinkering with the classics — a bit of anise in the hot chocolate or some candied pistachios in the carrot cake — helps keep customers engaged, chefs say.

Michael Paley, chef of Proof on Main, said that over the summer the Louisville, Ky., restaurant featured a gelato cart that offered such flavor options as lavender, raspberry, strawberry and bourbon peach.

But the most popular flavor was decidedly nontraditional. “Everyone’s favorite gelato flavor [was] sea salt caramel,” he said.

Now that summer is over, Paley said, the restaurant has closed down the gelato cart and is planning to offer a more seasonal hot chocolate selection at the close of the meal.

“It’s sinful,” he said, “made with white and dark chocolate, spiced with anise and cinnamon and topped with a house-made marshmallow.”

The Local Store in New York showcased a sweet corn panna cotta as a seasonal item this summer. “One of my favorite things is caramel corn, but that’s not a great sitting-in-a-restaurant dessert,” said owner Richele Benway.

For her dessert, she removes the kernels from the cob and adds them to milk, which is simmered and then passed through a fine strainer. She adds local honey and gelatin and garnishes the preparation with seasonal fruit or compote.

Compressed pineapple is made by placing the fruit in a sous vide vacuum bag and removing the air. Chefs say the process intensifies the flavors while keeping the fruit fresh.

It being fall, a lot of carrot cake can be found on menus. At the Beacon Hill Hotel & Bistro in Boston, pastry chef Lynn Warnesky serves it with crystallized ginger ice cream and candied carrots.

“Instead of it being a really spiced, dense cake, we use a carrot purée mashed with a light sponge cake, and instead of cream cheese frosting, we do a light cream cheese mousse,” she said.

This fall, other sweets new to the menu include pumpkin cheesecake at Zarella in New York, and warm roasted pear plated with ginger cake, verjus ice cream, a gingersnap and butterscotch and pecan candy at Vie in Chicago.

Non-seasonal classic-desserts-with-a-twist are performing well, too. Matt Fish, chef-owner of the two-unit Melt Bar and Grilled in the Cleveland area, said his fried Twinkies have been “extremely popular” since he opened his first unit in 2006.

Fish also does a bread pudding of the day.

“The crazier the flavor we create, the better it sells,” he said, although he’s not talking about mustard-and-celery bread pudding or anything like that. Instead, the offerings are more on the playful side. For example, a recent selection was a Reese’s Peanut Butter Cup and banana bread pudding.

“We are also working on a tiramisu bread pudding for the holidays,” he added.

At Abe & Arthur’s in New York, executive chef Franklin Becker reports that the restaurant’s best-selling dessert is French toast bread pudding — something he threw together a year ago when the restaurant was opening. He serves it with bourbon-maple syrup and butter pecan ice cream.

Jonathan Lundy at Jonathan’s at Gratz Park in Lexington, Ky., adds local appeal to his bread pudding by using doughnuts from neighboring Spalding’s bakery to make a doughnut bread pudding, which is dressed in a sauce made from Wild Turkey honey liqueur.

At Lemaire in Richmond, Va., chef Walter Bundy prepares a chocolate croissant bread pudding and serves it with a Wild Turkey crème anglaise.

A pumpkin swirl cheesecake with cranberry and orange compote also is on Lemaire’s dessert menu.

“Our cheesecakes also do well, and we change the flavor of those each week,” he added. Recent variations have included Kahlúa, strawberry and pumpkin.

Many chain operations have found full-sized success with mini-desserts, an innovation developed for Darden Restaurants’ Seasons 52 concept. The “mini indulgences” sell for $2.50 apiece, and, according to executives, restaurants still sell more than one per customer.

Since Seasons 52 introduced the mini-desserts about five years ago, casual-dining chains from T.G.I. Friday’s to P.F. Chang’s China Bistro have begun featuring flights of small, inexpensive items, with some guests ordering all of the mini-desserts offered on the menu – sometimes for the entire table to sample and sometimes for one guest to enjoy alone.

But a number of independents still are finding success with big traditional desserts, such as the six-layer chocolate cake at Zed451 in Chicago and Boca Raton, Fla., and tapping into diners’ desire to commune.

“We believe desserts that are large can be shared and actually offer a better perceived value,” said Steve Byrne, executive chef of Tavistock Restaurants, which owns Zed451. The chocolate cake was introduced in September and sells for $10. “It’s doing very well,” Byrne reported.

Then there are the diners who eat great big desserts all by themselves.

“At Prairie Fire and Prairie Grass Cafe, we do not offer small samples,” said Sarah Stegner, chef-owner of the two Chicago-area restaurants. “We have had great luck with desserts like a straightforward piece of chocolate cake or pie.”

Similarly, at the Sansei Seafood Restaurant & Sushi Bar locations in Hawaii, the Granny Smith apple tart accompanied by vanilla ice cream and caramel sauce has been on the menu since the first unit opened in 1996. It remains the restaurant’s best-selling dessert.

On the other end of the spectrum, at Trummer’s on Main in Clifton, Va., pastry chef Christopher Ford recently started serving $22 dessert tastings on Fridays. The tastings have proven so popular that he decided to offer them daily.

“Every table that orders the tasting really loves it,” he said, noting that guests don’t generally share the tasting, but order one per person.

“A couple could easily share it, but I’ve only split one,” he said.

About half of the guests who order it also choose the accompanying $19 wine pairing, he added.

Next, he served what he called a “basil sherbet,” prepared like ice cream but containing no eggs. The dish was served with frozen “shattered raspberries” made by freezing the berries solid and then smashing them with a mallet. It also included basil pound cake, fresh raspberries and mascarpone cream, all served on top of a frozen rock to keep it cold.

After that, he served chocolate soup prepared with a sherbet made from muscovado brown sugar, devil’s food cake and a cinnamon marshmallow.

Not surprisingly, chocolate is still king when it comes to dessert.

At Recette, chocolate comes in the form of s’mores — graham cracker ice cream, chocolate wafer, toasted marshmallow and hot chocolate sauce. The dish has been a mainstay on the dessert menu since the restaurant opened in January.

At Zarela in New York, it stars in a chocolate pecan pie that chef-owner Zarela Martinez called an “Aztec treasure.”

Chocolate pot pie is on the menu at Jonathan’s at Gratz Park. The dish is a molten chocolate cake baked in ramekins and topped with vanilla bean ice cream and chocolate sauce.

At Province, Zweiban offers a chocolate flan and a peanut butter flan stacked on top of each other and separated by a meringue crisp. It’s topped with chocolate sorbet.

At d.k. Steak House in Honolulu, guests get to indulge their chocolate cravings with a 22-ounce mud pie layered with strawberry and vanilla ice cream, chocolate fudge and macadamia nuts, and topped with whipped cream, more chocolate sauce and more macadamia nuts.

“We start with a flourless molten chocolate cake, top it with vanilla ice cream and chase it with a shot of chocolate bisque topped with whipped cream,” Ly said. n