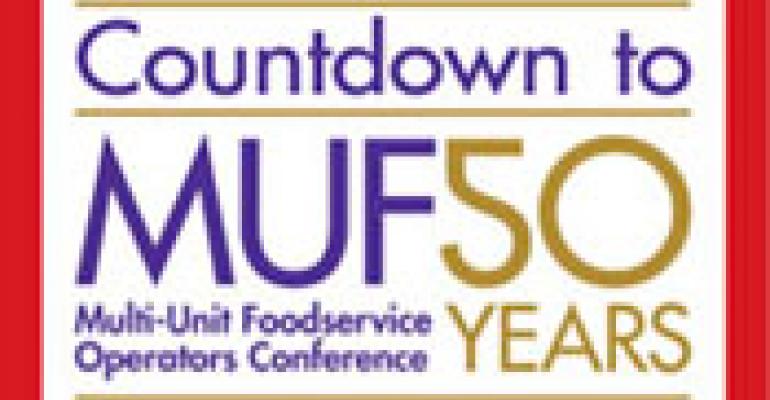 Thirty years ago, politics, unions and nutrition were top of mind at MUFSO

The closing year of the 1970s seemed to play out like a cliff-hanger in an action film, while at the same time providing us with an unexpected glimpse into the future.

In 1979 inflation was soaring, and Americans waited in lines at the gas pumps as they digested the news that oil was becoming a scarce commodity. The Chrysler Corp. was able to secure an unprecedented $1.5 billion loan from the federal government in an effort to step away from the brink of bankruptcy. The United States’ drawn-out war against terrorism was launched when Iranian students, under the sanction of the Ayatollah Khomeini, stormed the U.S. Embassy in Tehran and took 90 people hostage, eventually holding 52 Americans for 444 days.

The news was not quite as portentous in the foodservice industry in 1979. Tim and Nina Zagat published their first New York City restaurant survey—really more like a pamphlet compiled for their friends. Dublin, Ohio-based Wendy’s introduced salad bars in its restaurants. Howard Johnson’s was acquired by the Imperial Group of the United Kingdom. Chain operators Yoshinoya, Damon’s and Las Brisas all opened their first units.

Celebrating its 20th anniversary, MUFSO was held at the Fontainebleau Hilton in Miami Beach, where operators discussed pressing issues of the day—as well as issues that would still be top-of-mind three decades later. Sen. Orrin Hatch, R-Utah, told attendees to “get involved in politics or get out of the business.” The keynote speaker urged foodservice chains to play a more active role in government affairs and to form political action committees to raise money for industry-friendly candidates.

Unionization was another topic of discussion at MUFSO. Panelists agreed that taking the traditional role of opponent in a labor relations skirmish was not always the best way to keep unions from coming in the door. One panelist advised attendees, “The front line against unionization is the unit manager, who must be aware and alert.”

MUFSO participants also addressed another issue that has steadily picked up momentum over the years: nutrition awareness. A speaker representing the Gallup Organization cautioned participants that eating habits were changing and “interest in nutrition and additives as well as for cholesterol, sugar and salt have become increasingly important factors affecting how people eat.”

In a final example of “the more things change, the more they stay the same,” speakers also informed attendees that energy conservation would be a top priority in the coming decades.