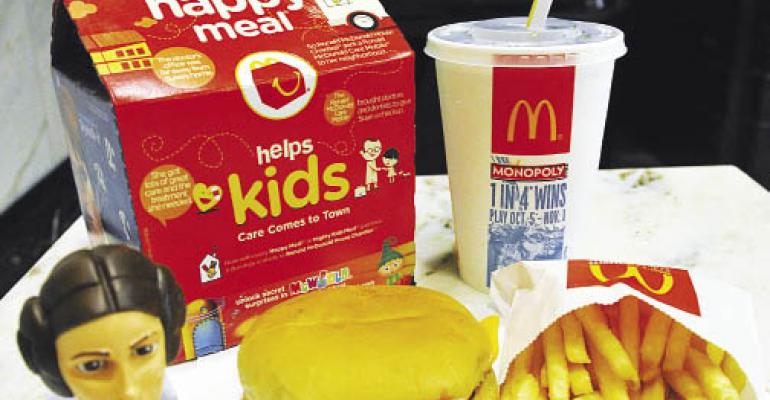 Experts weigh in on the laws, foods and trends that will shape the industry in 2011

This story is part of NRN's "2011 Forecast & Trends" special report.

While many in the foodservice industry applauded the changing of the guard in Congress and state houses across the nation in the midterm elections, Washington insiders are cautioning restaurateurs not to assume that 2011 will necessarily shape up to be a much more business-friendly year.

To be sure, 2010 — which began with the passage of President Obama’s controversial health care reform package — ended on a more industry-pleasing note, with the quick passage of the federal tax cut extensions, small business aid bill and sweeping food safety reform.

But that positive end-of-the-year momentum could grind to a halt in 2011, according to observers. Citing a divided 112th Congress presided over by a president with less than two years left in his first term, David French, vice president of government relations for the International Franchise Association, said he anticipates “a fair amount of gridlock” in Washington.

“There will be some things that develop that will be good for everyone,” he continued. “But there won’t be that many things.”

Health care. The president’s health care reform is in for a rough ride in 2011 and beyond, French predicts. The repeal debate “will suck all of the oxygen out of the room initially,” he said, adding that he expects the House to support repeal with at least 270 to 280 lawmakers voting for it. “Probably every single Republican will support repeal along with 15 Democrats.” But after that, it will move to the Democrat-dominated Senate, where it will just sit, he said.

In addition to the overall push to repeal health care, the measure is expected to be attacked in detail, as lawmakers pick apart specific provisions, such as the universally unpopular 1099 rule. “Some [provisions] will be hard even for the White House to defend,” French said.

Scott Vinson, vice president of the National Council of Chain Restaurants, said the NCCR is working with the administration in an effort to redefine the definition of a full-time worker with regard to health care benefits. “Now it’s 30 hours a week, which pulls a lot of people into a category they shouldn’t be in,” he said.

French added that the opposition won’t cease at the end of the year, either. “Health care doesn’t have a 2011 horizon,” he said. “It will probably be front and center until the 2012 elections.”

Union card check. While observers generally agree that union card check — or the Employee Free Choice Act — is dead at the federal legislative level, they also believe it has life beyond Capitol Hill.

“With the midterm election outcome, the business community may have fallen into a false sense of security,” said Joe Kefauver, managing partner and principal for Parquet Public Affairs in Orlando, Fla. “Many think the labor agenda is dead. And that’s not true.”

Kefauver said elements of the bill could find a friendly harbor in other areas, such as the National Labor Relations Board, which has a majority of labor-friendly individuals on the board. Other labor-centric issues, such as paid sick leave, parental leave and safety policies, are expected to re-emerge at statehouses and city halls across the country.

Some observers also are saying the decision by seven states to raise their minimum wage threshold this year might prompt President Obama to push for another federal minimum wage hike. Earlier, he had pledged to boost the minimum wage to $9.50 an hour by 2011 and index future increases to inflation. The federal minimum raise rose to $7.25 an hour in 2009.

Immigration. The foodservice industry has long supported comprehensive immigration reform, but it seems highly unlikely that anything dramatic will occur at the national level in 2011. With the political center having shifted to the right on immigration, there doesn’t appear to be much stomach in Washington for the kind of political compromise necessary to pass anything that is immigration-related — as evidenced by the defeat of the DREAM Act at the close of 2010. The DREAM, or Development, Relief and Education for Alien Minors, Act was intended to allow the children of illegal aliens in the United States to gain legal status through military service or by attending college. Instead, several states will probably address the issue, as was done in Arizona last year.

“The issue is raging at the state level,” Kefauver said.

Menu labeling. The Food and Drug Administration is expected to publish proposed regulations governing federal menu labeling before the end of March 2011. Industry associations continue to work with the FDA in the hopes of building as much flexibility as possible into the final regulations. For example, posting calorie counts in pizza outlets that specialize in delivery and takeout makes little sense in terms of helping the customer make a decision. “There are many different concepts in the industry,” Vinson said. “And what works for one may not work for another.”

Cap and trade. The president’s climate change measure, also known as “cap and trade,” is being seen as a casualty of the Republicans’ midterm election sweep. Crafted to help conserve resources, the bill would have raised energy costs for businesses, which caused many otherwise “green” restaurateurs to oppose it — particularly during the continued economic downturn.

Local battles. California, long a bellwether state for business-impacting legislation, saw two anti-industry ordinances enacted in 2010 — a continuation of fast-food zoning in part of Los Angeles and a ban on Happy Meals in San Francisco. Kefauver warns operators to be prepared to shift their focus to more state and local targets in 2011.