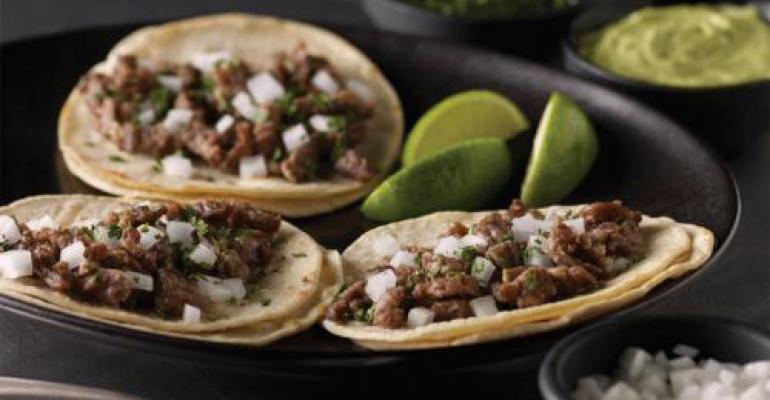 Taco Cabana, in an effort to serve more authentic fare on its Tex-Mex menu, has introduced a line of open-faced tacos inspired by the ones served by Mexican food trucks.

The new tacos contain grilled marinated steak, fresh cilantro and diced onions and are served open-faced on two corn tortillas with lime wedges. They also can be topped with salsas offered at the fast-casual chain’s self-serve salsa bar.

The street tacos, available for a limited time, are priced at $3.99 for an order of three, Taco Cabana said.

The 156-unit Taco Cabana said it sent its culinary team to Guadalajara, Mexico, in order to ensure the street tacos would represent the authenticity of the street vendors in that region of the country.

“Customers are all about experiencing new flavors as well as regional inspirations for food,” said Todd Coerver, chief marketing officer for the San Antonio-based chain. “Led by Taco Cabana’s heritage and our customers’ desire for something different, the team was inspired by what they saw on the culinary trip to Mexico. Bringing street food tacos to our menu for a limited time lets us explore a traditional favorite in a way that makes it interesting for our customers.”

Taco Cabana is owned by Syracuse, N.Y.-based Carrols Corp., which also is parent company of the Pollo Tropical chain and the Burger King system's largest franchisee.