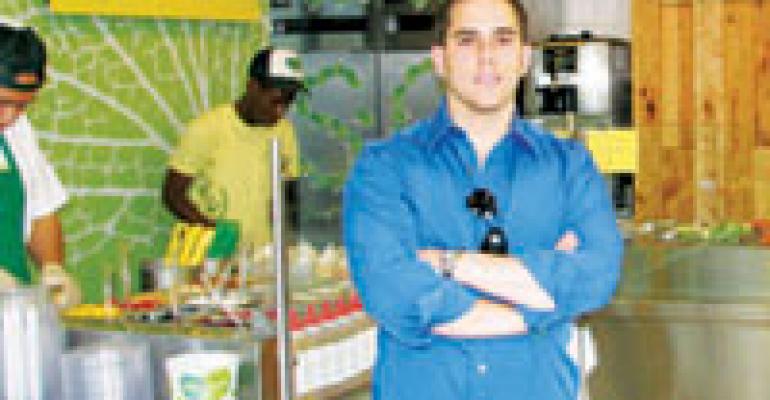 Do-gooder environmentalism might sound like a costly luxury when many restaurants are struggling just to stay open, but for three-unit Sweetgreen in the Washington, D.C., area, it’s just part of doing business. And business is growing, the chain’s owners say.

“We knew we wanted to create a restaurant that was young and fresh and trendy, but we also wanted to have more of a soul,” says partner Nicolas Jammet. “So it wasn’t just, ‘Hey, we’re trendy. We have cool chairs and cool lights.’”

Taking an environmental approach seemed like a way to have that soul and also to appeal to the young, urban demographic the company was targeting.

“We also believe in it,” adds Jammet, the son of Rita and André Jammet, who for many years operated La Caravelle, the celebrated fine-dining restaurant in New York.

The original Sweetgreen in the Georgetown neighborhood of Washington, D.C., encompasses just 560 square feet, but generated sales in 2008 of about $1.3 million without seating or the capacity to do catering. It was a 35 percent jump from sales in 2007.

The partners—Jammet, Nathaniel Ru and Jonathan Neman—opened their second unit, which is 2,000 square feet on the ground floor and another few hundred in the basement for catering, in Washington’s Dupont Circle at the beginning of April. Their third unit, in Bethesda, Md., opened at the end of April.

“They were kind of pioneers in D.C. in bringing a green initiative into their practice. [Menus were] paper embedded with wildflower seeds that you could plant. It was a creative, innovative approach to practicing what they were trying to preach.”—Erin Hartigan, DailyCandy editor, Washington, D.C.

A mobile, bright green yogurt van is in the works, too. Ru, who also moonlights as a DJ, is working on a remix of the traditional ice-cream truck chime for the van.

Sweetgreen’s environmentalist approach has helped its image among customers, local observers say. And that approach is apparent in a wide range of areas within the growing chain.

Most of the packaging is biodegradable—the utensils and cups are made from corn. Reusable salad bowls, called “salad blasters,” can be brought in for refills. Customers who bring them in receive a free vegetable topping.