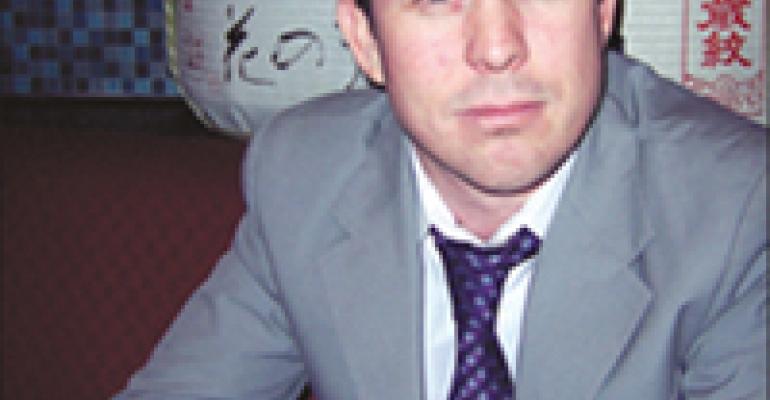 Atrained sommelier, Paul Tanguay began developing his passion for saké about seven years ago when he joined SushiSamba, a Japanese, Brazilian and Peruvian fusion concept that has locations in Chicago, Miami, New York, and Tel Aviv, Israel. Since then, he has toured innumerable kura, or saké breweries, served as a judge at tasting events in the United States and Japan, and started work on a book about saké that he has described as “user-friendly and fun.”

People have been saying for years that saké is “the next big thing.” Is it really?

It’s hard for me to say because I work at SushiSamba, where our Japanese customers arrive already thinking about saké, but I think that interest among the general public is there. Every saké importer has been seeing growth of 15 to 20 percent every year for the past decade or so.

How does American saké compare to Japanese saké?

There really is not a lot of good American saké. I think it mainly has to do with the rice.

You obviously need to be concerned with saké because of the restaurants you represent, but should beverage directors at non-Japanese restaurants worry about saké?

The average place, probably not. But anyone who is interested in maintaining a strong beverage program should be looking at saké. If you sell great wines, why not sell great saké?

How do you manage staff education?

I do weekly staff education on all beverages, but especially saké. [My staff] are my soldiers, since there’s no way I can be everywhere at once.

Some saké purists look with disdain at “sakétinis” and other saké-based cocktails. How do you feel about them?

If a cocktail brings saké awareness to people, then I don’t see anything wrong with it, so long as people don’t go using expensive sakés for them. I used to do saké cocktails, and still will on special occasions, but on my list I’ve gone to shochu-based cocktails exclusively.

Why shochu, a clear Japanese distillate?

Shochu is a great vodka alternative. A lot of it is still pot-distilled, so you get a bit more flavor and roughness than you do with vodka, plus it’s a lower proof [about 25 percent alcohol on average], so a couple of cocktails won’t hit you over the head the way vodka cocktails will.

Of the myriad tales told about that archetypal spring beer style, bock, the following is my favorite:

Once upon a time in Bavaria, two farmers were arguing over whose beer was stronger. To settle the dispute, they decided to drink each other’s beer until one of them got drunk, thus proving that the other’s beer was the strongest. After some time at this, one of the men got up to answer nature’s call and promptly fell on his face.

“Aha!” cried his adversary. “You’re drunk! My beer is stronger!”

The fallen man protested, saying that he had merely tripped over a nearby goat.

“The ‘goat’ that tripped you was my beer!” answered the other. The German word for goat is bock, and thus a legend was born.

In truth, bock beer is strong, mainly malty lager that is supposed to have been first brewed in the northern German city of Einbeck. It was a corruption of the word Einbeck that gave the beer its name.—Stephen Beaumont