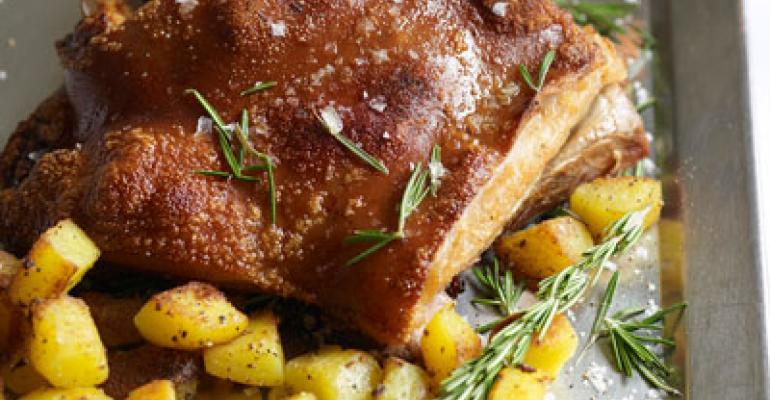 Upscale restaurants are putting their catering game plans in action for Super Bowl XLV as the big game approaches.

From the $285 whole-roasted pig and potatoes offered by Maialino in New York City to the $49 Super Roll sushi platter being promoted by the Kona Grill chain, restaurants are looking beyond the typical pizza and wings.

Nowhere are those options more diverse than in the Texas cities of Arlington, Dallas and Fort Worth, which will host the sports and entertainment celebrities and football followers at the new Cowboys Stadium, where the Super Bowl will be played Feb. 6.

The 220-seat fine-dining Al Biernat’s in Dallas, for example, has been taking Super Bowl-related reservations since early summer, leading it to pitch a 40-by-40 foot tent in its parking lot to accommodate pre-game overflow crowds.

“If we had 600 to 800 seats, we could fill them,” said Brad Fuller, Al Biernat’s general manager, who is directing the overflow area that will offer a raw bar, DJ music, celebrity watching and a bar-food menu in lounge seating for eight to 12 that can be reserved for $2,000 a pop. That includes bottle service with champagne, tequila and vodka.

“Our chef, Michael Weinstein, has created a special bar menu, and the tent will be open from 8 p.m. to 2 a.m. Thursday, Friday and Saturday before the game,” Fuller said.

Restaurants farther from the fray also are offering unusual catering options. Maialino in New York City has created the “Pigskin Classic,” which is the first time chef Nick Anderer has made the restaurant’s signature crispy-skinned Maialino al Forno with Rosemary Roasted Potatoes to go.

Kona Grill, based in Scottsdale, Ariz., is offering catering for “health-minded football fans” with sushi roll and sashimi platters for carry out.

Marc Buehler, the 25-unit Kona Grill’s president and chief executive, said, “We've had guests throughout the playoffs ask if they could order Kona Grill's sushi rolls and sashimi in large quantities for events they host at home. We thought it was a great alternative to the usual fried and fatty foods.”

Priced from $50, each Super Roll platter feeds five for dinner for eight to 10 as hors d'oeuvres. Kona Grill is also offering club-sandwich platters for $49.