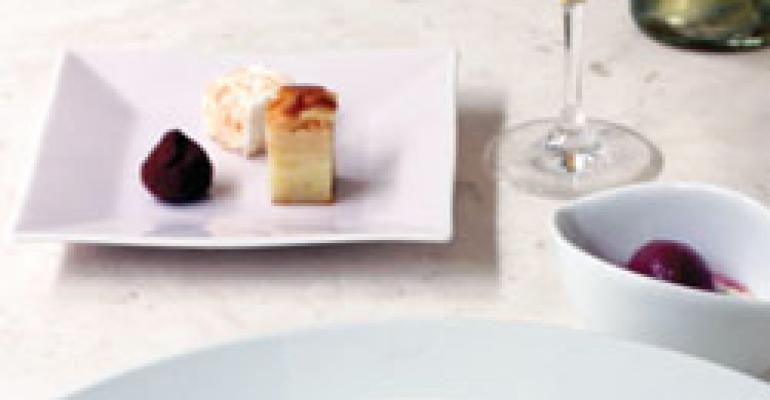 Sugar high: Chefs seek to cash in on meal’s end

As Paul Conforti tells it, when he and his partner Kim Moore opened the first Finale Restaurant in Boston in 1998, the only place you could get a plated dessert was in a fine-dining restaurant or a fancy hotel.

“We just didn’t think that was right,” he says.

So he and Moore sought to make it even easier for diners to enjoy such affordable indulgences.

“Even the best desserts in the country” usually cost less than $12 each, Conforti says, “but to get access to those you had to spend $100 per person for dinner because there’s no way you’re going to show up at 8 o’clock on a Friday night at one of those restaurants and ask for a table for four for dessert only.”

Conforti and Moore developed the business plan for a dessert-focused restaurant some years earlier while they were attending Harvard Business School, and as they did their research they found a niche they thought they could fill. The four-unit Finale concept, which has another location planed for 2009, is just one of a handful of dessert-focused eateries, from Boston to San Francisco, seeking to tap into the widespread popularity of sweet treats.

Candy Bar in San Francisco caters to sweet seekers by blending familiarity and comfort with a trendy restaurant feel. Its s’mores, for example, which sell for $9, are an upscale twist on the humble campfire treat. The dessert is served on a cedar plank, the graham crackers and marshmallows are house-made, and the whole confection is sprinkled with pine-scented sugar.

Like most dessert-focused eateries, Candy Bar does the bulk of its business in the evening, after dinner, as customer extend their nights out.

“We wanted to have a place where people could come after dinner,” says Tan Truong, Candy Bar’s general manager. Diners “have a glass of wine, a dessert and just hang out, as opposed to having dessert at the end of a meal and then being rushed out.”

Back at Finale, the menu features such classic dishes as the Boston Cream for $10.95. The dish is a Boston cream pie served with whoopie pies, a vanilla gelato sandwich made with cherry-almond Florentines, apricot sauce and fresh fruit. Finale uses an off-site pastry kitchen to create its sweets, and the components are delivered to each location where they are assembled and plated to order.

ChikaLicious in New York has an open kitchen, and diners choose from a tasting menu of three desserts for a set price of $12. First there is an “amuse” that might include a black-pepper gelée with Bartlett pear sorbet, then several “main” courses, such as a warm chocolate tart with pink-peppercorn ice cream and red-wine sauce or fromage blanc island “cheesecake,” which is more like a lightly sweetened snowball of fromage blanc than a cake. The final course is a selection of petits fours.

All of these restaurants depend on alcoholic drinks to complete the experience and pad the bottom line. This is especially critical for the lounges, which draw a bar crowd as much as dessert eaters.

Even at Finale some 50 percent of the patrons order an alcoholic beverage, its owner says, and just in case the customer isn’t sure what to choose, the menus list suggested wine pairings. ChikaLicious’ owner estimates that 75 percent of his guests order the $7 wine pairing.

But despite having menus of almost universally loved indulgences, dessert-focused operations are not without their obstacles.

The first such challenge begins at the door, as restaurateurs select names and signage to distinguish themselves from both pastry shops and typical restaurants. Finding categorizations like “cafe” open to interpretation, operators experiment with terms that send a clearer message. Both Candy Bar and Chicago’s Sin are referred to as “dessert lounges,” while San Jose, Calif.’s APerfect Finish dubs itself a “dessert bar.” The owners of ChikaLicious simply use the term “eatery,” and Finale’s Park Plaza location in Boston has signs that call it a bistro, bar and “desserterie.”

Another challenge is the fact that these restaurants tend to be empty just as savory restaurants are busy.

In an effort to remedy this, Candy Bar, which is located in the mostly residential neighborhood of San Francisco’s Western Addition, also offers a modest menu of appetizer-style dishes to draw in the local crowd during happy hour.

Similarly, in Boston, Finale serves lunch as well as dessert. There is also a baker’s dozen of savory dishes on the menu, including a cheese plate for two, $11.95, several salads, and truffle macaroni and cheese that sells for $9.95. Co-owner Conforti says these appetizer-size dishes make up no more than 5 percent of the business.

ChikaLicious makes only one accommodation for the sugar-shy, a cheese plate, and keeps the focus on sweets, particularly for Manhattan’s tourist clientele, which tends to indulge its sweet tooth in the afternoon, says owner Don Tillman. The restaurant has two busy periods, Tillman says, the first between 3 p.m. and 4:30 p.m. consisting of an almost exclusively “European and international-type crowd,” and a post-dinner rush after 8 p.m.

Some pastry chefs venturing out on their own have opted for restaurants with both sweet and savory menus.

When Mindy Segal first considered opening Hot Chocolate in Chicago, her first thought was to model it after Boston’s Finale, “but in an artisan concept as opposed to a chain,” she says. Soon enough, though, the idea evolved into a full-service restaurant, admittedly with the emphasis on dessert.

Still, neither has lost sight of the confections that inspired their businesses: Both chefs also operate retail bakeshops on the side.