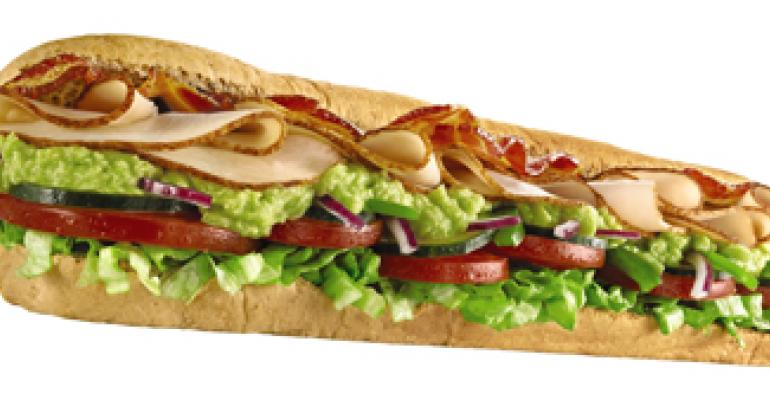 Subway to serve up avocado

Subway will add avocado as a premium seasonal topping for its sandwiches at its 22,000 locations across the United States starting next week, the chain said Friday.

The chain said the fruit would be promoted in several limited-time offers this summer: a turkey and bacon avocado sub; a steak, egg and cheese with avocado for breakfast; a Subway Club with avocado; and a BLT with avocado.

Customer also can add avocado to any regular sub for 50 cents for a 6-inch sandwich and $1 for a footlong, Subway said.

The fruit will be served as a 100 percent avocado paste in most markets, although the California Avocado Commission said sliced avocado would be served in the Los Angeles, Palm Spring and San Diego markets.

Avocado has been an option in the West Coast and the Southwest markets for years, a Subway spokesman said. At the end of the summer, franchisees will have the option to keep avocado as a permanent topping, he said.

Subway has long marketed itself as a better-for-you alternative to other quick-service options, and avocados, despite their high fat content, are seen as nutritious, in part due to their high level of monounsaturated fats and various micronutrients.

“The California Avocado Commission has worked with Subway on usage concepts for a number of years and it had really strong support in the Western areas [of the country] with fresh avocados on the menu,” said Jan DeLyser, the CAC’s vice president of marketing.

However consumption is expected to drop this year because of a lighter-than-usual harvest in California, DeLyser said.

“We like the possible impact on consumer demand” of the Subway rollout, she added.

DeLyser said Subway had negotiated the purchase of avocados from multiple sources to fill the franchise giant’s supply chain.

Avocado prices are on the rise, however, and heavy users like Chipotle Mexican Grill have pointed to fruit’s higher price as one reason behind their rising food costs.