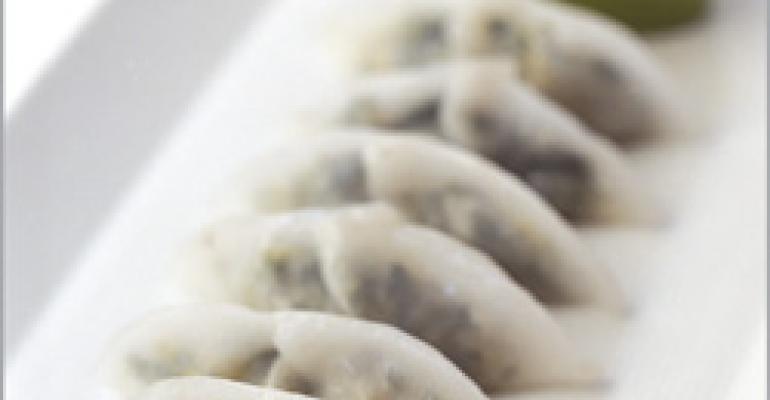 Steaming’s status as a bland food preparation is evaporating as chefs embrace the moist-heat method as a way to highlight delicate flavors and diners seek it out for its healthful reputation.

Although steaming does not impart to foods the bold flavors or crispy textures associated with grilling, frying or roasting, a growing number of chefs are turning to steam heat in their preparations of everything from meats and fishes to vegetables, dumplings and international dishes.

And diners are eating those items up.

“I think customers like the healthier option of steamed to pan-fried,” he says, “and while you can get all of our dumplings both steamed and pan-fried, there are some whose flavors are better when steamed.”

“I really recommend the vegetarian pea shoot and shiitake mushroom [dumpling] steamed because they are so delicate,” Lao says, “and the Peking duck pan-fried to recreate the crispiness of the Peking duck skin.”

Six dumplings sell for $5.55 at Rickshaw.

Similarly, Paul Drew, executive chef of the Atlantic City, N.J., location of Phillips, the Baltimore-based chain of seafood concepts, says he finds no drawbacks to steaming. In fact, he lists the cooking method on his menu five times, for such items as Maryland steamed shrimp for $9.99 and steamed king crab legs for $34.99.

“Steaming retains the moisture and flavor for fish,” Drew says.

The chef likens this clambake presentation to attention-grabbing desserts.

“Every time one of them goes into the dining room, it catches everybody’s eye and everyone starts to order it,” Drew says. Occasionally, Drew will present a VIP customer with a clambake on the house to build interest in the dining room.

“It helps the average check—big time,” he says. At McCormick and Schmick’s restaurants, based in Portland, Ore., miso-marinated fish dished up with udon noodles and miso vinaigrette holds a spot on the core menu at the chain’s 80 units. The restaurant company’s vice president of culinary development and training, Bill King, suggests steaming “fattier” fish, such as black grouper from the southern Atlantic, for the dish.

After King’s chefs pick a fish for the dish that is priced at approximately $21, depending on availability and location, the fish is steamed in perforated pans with a marinade of white miso, mirin, white sugar and honey. King suggests marinating the fish for a full shift, or about eight hours, before cooking.

King also is considering steaming fish in Fata paper, a heat-resistant and clear film, after seeing the method demonstrated by chef Gene Kato at the Culinary R&D conference held recently in Los Angeles. The dish is called cartoccio, which is Italian for “in a bag.” Kato, chef-owner of Japonais in Chicago, New York and Las Vegas, prefers a fish with high fat content, such as sea bass.

Kato places the fish, maitake mushrooms, bamboo shoots, Japanese peppers and cubes of chilled butter on a sheet of Fata paper that he says can be heated up to 400 degrees. Then he cups the plastic and pours over a marinade of sake, soy sauce, blue seaweed powder, grated garlic and pepper. To seal the package, he twists the paper, and secures it with a Japanese clip or string. After about three hours of marinating, he steams the concoction until the fish is just cooked through, or about 13 minutes.

The fish dish is brought to the table in the baking film and opened for the guests to inhale the aromatic vapors. It’s finished with a dollop of tomato compote spiced with shiso and other Asian accents. The fish sells at Japonais in Las Vegas for $34, Kato says.

Steaming was an important style of cooking in Japanese cuisine and remains so, said Japanese food expert Elizabeth Andoh. She notes that steaming is the rice-cooking method of choice in Japan.

The technique also plays a key role in dishes from around the world, from Middle Eastern stuffed vegetables to French papillote to Mexican tamales.

David Groll, who runs McAlister’s culinary development and is the company’s executive chef, says steaming “brings the meats back to life.”

Besides the deli meats, Groll advocates steaming his new meat-loaf as well as two sides: veggies containing broccoli and carrots, and mashed potatoes. They also steam a new fillet of salmon and offer it as a dinner entrée, salad or sandwich with tarter sauce.

Each McAlister’s has eight countertop steamers in which a 4-ounce-to- 5-ounce serving of meat heats in one to two minutes, Friedman says. An average McAlister sandwich sells for $6 with a side dish at lunch.

At the new Latin restaurant Maya Del Sol in Oak Park, Ill., chef Ruben Beltran steams shrimp and calamari for a “ceviche” priced at $9.75. After steaming the seafood, he tosses it with orange segments, some habanero chiles, jícama, avocado and cilantro.

Mussels are one of the more popular steamed items on menus this fall. At Phillips in Atlantic City, N.J., the shellfish comes with Thai red-curry sauce and is $8.99.

Also, at the soon-to-open Stix in Boston, a concept where much the food will be served on sticks, the saké-steamed mussels topped with scallions is slated to sell for $9 and come in a bowl. Finally, Nadia Tilkian’s new French-inspired bistro Maijean, located in Clarendon Hills, Ill., features mussels marinière with white wine, parsley and cream for $9.