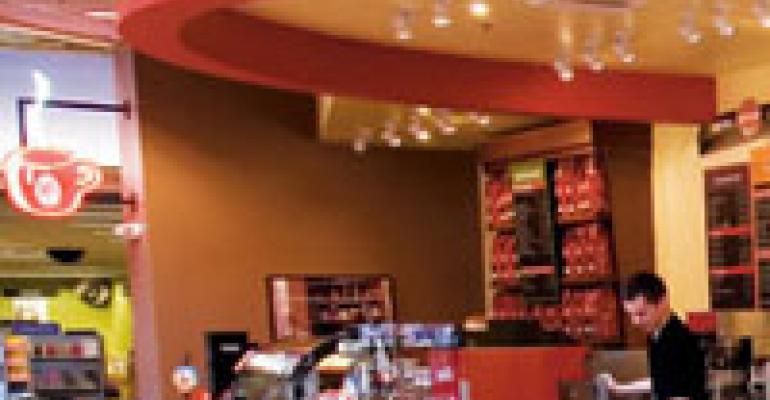 The news followed Schultz’ announcement that another 300 underperforming Starbucks locations would close this year, in addition to the 600 already scheduled to be shuttered. Schultz noted that some of the real estate to be made available by the closures “may provide an attractive conversion opportunity to potential Seattle’s Best franchisees,” which would also help Starbucks Corp. reduce its potential lease termination costs. —

“We believe that the Seattle’s Best coffee brand can play a unique role in helping capture a larger share of the specialty coffee segment by providing options and variety to a broader spectrum of customers,” Schultz said. —

Seattle’s Best cafes differ from Starbucks in that they offer a wider range of drinks, including milk shakes, teas and fruit-based coffee alternatives, as well as OvenSong baked sandwiches and other foods for various dayparts. —

Prices for specialty drinks, however, are about the same as those at Starbucks, Seattle’s Best officials said. —

Seattle’s Best also is known for its unique cold-brewed coffee base for many of its drinks, such as the JavaKula line, similar to the ice-blended concoctions available at other coffeehouses. The brand also offers proprietary Red Cane Kola drinks, which are carbonated like sodas but made from kola nuts and pure cane sugar, which appeals to the growing anti-corn-syrup audience. —

News that Starbucks would ramp up franchising at Seattle’s Best left some observers asking why a franchisee would want to open a coffeehouse in a location that didn’t work for segment-leader Starbucks. —

On the other hand, for some franchisees, the selling point may simply be the potentially attractive subleasing opportunities from Starbucks, which would be motivated to help the Seattle’s Best brand succeed, he added. —

Consultant Steve Pettise, managing partner with Golden Spike Resources Group in Los Angeles, said potential franchisees would have to take a hard look at why Starbucks has failed in such locations. If it was because of cannibalization from another nearby Starbucks, a conversion to Seattle’s Best could be successful by offering consumers an alternative brand. —

“I have always thought the strategy of buying Seattle’s Best was brilliant on the part of Starbucks because it has the best brand cache,” Pettise said. —

However, Seattle’s Best’s potential for growth as a franchise brand will depend on whether Starbucks develops it with “a real business plan,” he added, “not just as a way to deal with closing locations.” —

The move evokes the refranchising strategies of chains such as DineEquity’s IHOP and Applebee’s, Jack in the Box, Sonic Corp. and CKE Restaurants’ Carl’s Jr. and Hardee’s, which are selling units to franchisees as a way of cutting capital expenditure while seeding growth. —

Starbucks does not franchise its namesake brand, but Seattle’s Best was franchising even before Starbucks Corp. bought the chain in 2003. What was then the small regional Seattle Coffee Co. was born in 1970 in Seattle, the same coffee-crazed town that gave rise to the now global 16,000-unit Starbucks chain. —

In 2004, Starbucks partnered with Kraft Foods to begin selling the Seattle’s Best brand coffee in grocery stores for home brewing. —

The following year, Starbucks opened the first Seattle’s Best cafe in a Borders bookstore. Now 480 of the 550 Seattle’s Best locations are in bookstores, and the company is continuing to look for licensing opportunities. —

The company also licenses about 87 self-serve Express kiosks in grocery stores across the country, and the coffee is available in more than 6,000 foodservice locations. —

This month Subway is testing the sale of Seattle’s Best coffees in stores, a move that, if rolled out, could help Starbucks Corp. steal market share from quick-service retailers such as McDonald’s and Dunkin’ Donuts, which have been building their premium-coffee offerings in recent years. —

Seattle’s Best has 10 company-owned locations, and Tom Ehlers, Seattle’s Best vice president and general manager, said he would not rule out the possibility of more company-operated stores. —

Future growth, however, will focus on franchising, initially on the West Coast and in Texas. Currently, 36 units are operated by 12 franchisees. —

Last week, Ehlers revealed more details about the company’s franchising plans, which include the offer of a flexible range of store sizes, from 10-square-foot kiosks to larger stand-alone cafes with indoor and outdoor seating. The company offers a “mix-and-match approach” that allows franchisees to model the outlet for the space and consumer expectations. —

“The specialty coffee world has changed. People expect a darned good cup of coffee everywhere now,” Ehlers said. “We can help franchisees get into smaller spaces and into channels where specialty coffee hasn’t gone.” —

Starbucks does not report sales figures for Seattle’s Best, and Ehlers declined to offer insight into sales trends for the smaller brand. —

Starbucks stores in the U.S. saw same-store sales drop 10 percent in the December-ended first quarter, largely because of declining traffic as consumers cut back on spending. —

Ehlers noted, however, that the specialty coffee market is still growing—the fact that chains like McDonald’s, Dunkin’ Donuts, and Subway are beefing up their coffee lines illustrates what many see as the continuing growth potential for coffee. —

“Reports of the demise of specialty coffee are not correct,” Ehlers said. “There is an opportunity and a need from customers for more.” —