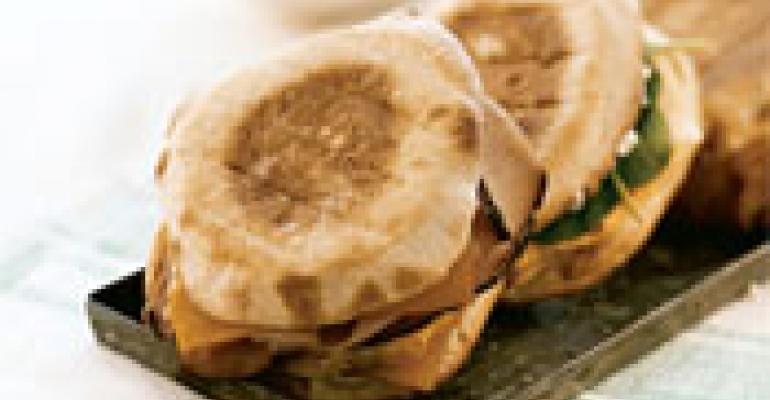 SEATTLE Starbucks Coffee fans may soon smell a renewed focus on the beverages that built the global coffeehouse chain, starting with those customers who are said to be put off by the conflicting odors of breakfast sandwiches. —

By the end of the year, hot breakfast sandwiches no longer will be on the chain’s menu—in part because chief executive Howard Schultz believes scents from heating the sandwiches interfere with the aroma of coffee. —

And nearly 600 fewer Starbucks Coffee outlets would exist than had been planned as a result of closures and opening cutbacks. —

Those moves are elements of what Schultz promises will be a year of transformation to reverse softening sales and traffic trends a U.S. branches of the 15,000-unit chain. —

Starbucks’ transformation so far has included a management shakeup in January that resulted in the disappearance of former chief executive and president Jim Donald and Schultz’s retaking of the reins he held from 1987 to 2002. Company officials last month also disclosed plans to close 100 underperforming stores and delete 475 outlets from this year’s plan for new U.S.-store development while increasing openings abroad. —

In March, at the company’s annual shareholder meeting, Schultz is expected to unveil five “bold, consumer-facing” initiatives that he has predicted will be “a major catalyst for change.” —

The elimination of the breakfast sandwich line was the first operational initiative to be revealed as the company aims to reignite consumer passion for what Schultz calls the “Starbucks experience.” —

Aside from the smell factor, the sandwiches also slow speed of service during a key daypart and yield lower profit margins than do beverages, explained Schultz, who has been fretting for more than a year about the “commoditization” of the Starbucks brand. —

The sandwich line, which evoked a McDonald’s Egg McMuffin but with more premium ingredients, was introduced in 2006. The items had been rolled out to about 4,000 of the 7,000 domestic Starbucks Coffee outlets and accounted for about 3 percent of sales, boosting revenues by an annual average of about $35,000 per store. —

Analysts say the move away from breakfast sandwiches is likely to impact same-store sales by less than 1 percent, and applauded the menu shift. —

“We will welcome the removal of this food from the stores because, in certain cases, the stores did, in fact, smell like cooked processed food and not at all like coffee,” said John Ivankoe, an analyst with JP Morgan in New York. —

John Moore, a former Starbucks marketing executive and consultant with Brand Autopsy in Austin, Texas, said Starbucks has been making operational changes that have reduced the in-store coffee aroma for some time. The use of pre-packed ground coffee and automated espresso machines, for example, have been necessary efficiencies that helped the chain grow, but have reduced the visceral aromas that result from more hands-on modes of in-store production. —

“They used to say, ‘Coffee’s our core, but food is our opportunity,’” he said. —

Indeed, Starbucks is not moving away from the food business. Schultz said the brand is looking at healthy breakfast-on-the-go alternatives and will continue its baked-goods line and lunch offerings. —

But Schultz hinted that innovations to come will require capital investments, implying something more than introductions of new types of muffins or doughnuts. —

Schultz, however, brushed off critics who described Starbucks’ new strategies as a response to “noise about competition in the coffee space.” —

“Let me emphasize, we don’t see that as the issue,” he said. “What we need to do is simple: Differentiate our experience.” —

Since the introduction of the Egg McMuffin in 1973, McDonald’s has owned the quick-service breakfast market, “but only for people who cater to that brand experience, and that’s not everybody,” said foodservice consultant Dennis Lombardi, a vice president at WD Partners in Columbus, Ohio. —

“I don’t think people expect a full meal menu from their coffee-house,” he added. “I don’t think you can ever get away from the fact that Starbucks is so much more than just about coffee, and that the experience is so different than what McDonald’s has to offer.” —

Moore, the consultant and Starbucks veteran, predicted, however, that Starbucks will be de-emphasizing other distracting aspects of the brand experience that it introduced in recent years, such as the sale of music, movies and books in its coffeehouses. —

“They had 45 million customers coming in every week, so the thinking was, ‘How can we best leverage those eyeballs,’” Moore said. “Now they’re talking about the coffee more, and that’s a major shift.” —

Starbucks last month reported a 1-percent decline in first-quarter U.S. same-store sales on a 3-percent drop in traffic for the period, ended Dec. 30, marking the chain’s worst performance since it began reporting such metrics in 2004. —

Net earnings for the quarter were up 2 percent from a year earlier to $208.1 million, or 28 cents per share. Revenue rose 17 percent to $2.8 billion on the strength of store openings and better same-store sales overseas. —

In addition to closing 100 underperforming stores, the company plans to open only 1,175 new domestic stores this year, 475 fewer than previously planned and a decline of 34 percent from its openings in fiscal 2007. For fiscal 2009, fewer than 1,000 new U.S. stores are expected. —

At the same time, planned international openings were increased to 975 for this year, and more than 1,000 are expected to open in 2009, outpacing domestic growth for the first time. —

Foodservice stock analyst Matthew DiFrisco of Tom Weisel Partners in New York predicted that Starbucks’ new initiatives will include its expansion of handcrafted, noncoffee products, such as fruit smoothies and teas, and a greater tiering of menu prices, with lower-priced and perhaps more premium coffees. —

“We think Starbucks management may have gotten somewhat nervous, given that they had become more dependent on a lower demographic, but mostly angry at even the possibility that fast-food concepts could compete successfully against the Starbucks brand,” DiFrisco said. —