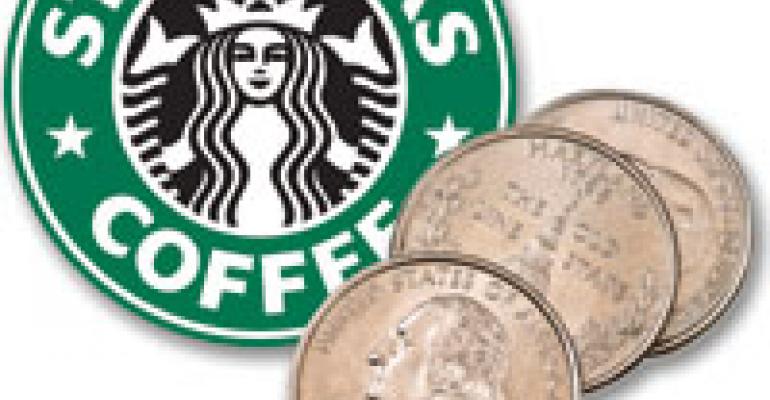 SAN DIEGO Starbucks faces a nationwide spate of what it called “copycat” lawsuits, the coffee-house giant’s planned appeal here of a $106 million judgment in favor of some 100,000 baristas is expected to shed light on a gray area in California’s labor laws. —As

Within days of the state court ruling that Starbucks should not have allowed tips to be shared with supervisors at nearly 1,400 Starbucks Coffee branches in California, the chain was named as a defendant in comparable class-action lawsuits in Massachusetts, Minnesota and New York. —As

Though the plaintiffs in all those states said they have similar statutes prohibiting the inclusion of shift supervisors in tip-pooling plans, some labor lawyers wonder whether semantic wiggle room in California’s labor code might provide Starbucks with leverage in seeking a reversal of the San Diego judge’s decision. —As

Nonetheless, California’s labor code says employees with supervisor duties are not allowed to receive a cut of pooled tips. —As

Starbucks, however, adamantly argues that its shift supervisors have no managerial authority and thus are entitled to what court testimony said worked out to an average of $1.70 an hour in extra income from tip jar gratuities. —As

Describing the court ruling as “not only contrary to the law, but also fundamentally unfair and beyond all common sense and reason,” Starbucks insisted that shift supervisors, like baristas, are hourly employees at the front line of customer service who deserve to share in tips. —As

Though the ruling in California was based strictly on its labor codes and official interpretations of them, the ensuing complaints in the other three states cited nearly identical grounds. At press time, an attorney representing Starbucks workers in Washington also was said to be considering legal action in that state. The most recent complaint, filed March 3 in federal court in Manhattan, seeks at least $5 million on behalf of potentially 2,000 baristas who worked for Starbucks in New York state over the past six years. —As

Starbucks has promised to “vigorously fight” all “copycat lawsuits.” —As

National chains like Chili’s, Red Lobster, California Pizza Kitchen, McCormick & Schmick’s, Applebee’s and Morton’s also have been embroiled in court battles over tip sharing in recent years, defending themselves against claims of violating various state and federal laws. —As

The ruling in California against Starbucks has done more than spark a new wave of tip-pooling litigation, labor attorneys said. —As

“It has definitely raised awareness” about tip-pooling rules, said plaintiffs’ attorney Shannon Liss-Reardon, whose Boston-based firm of Pyle, Rome, Lichten, Ehrenberg & Liss-Reardon has been involved in about 40 tip-pooling cases across the country, including the filings against Starbucks in Massachusetts and New York. —As

“Since the Starbucks ruling [in San Diego], I’ve been getting calls from waitstaff all over the country” questioning their employers’ tipping policies, Liss-Reardon said. —As

Veteran labor lawyers said such cases illustrate how careful employers must be when employees share tips, as they commonly do. —As

In California, for example, the legal entitlement to participate in tip pools is determined by job duties, which some attorneys see as an area of the law that Starbucks’ appeal may help clarify. —As

California’s labor code specifically states that no employer or “agent” of the employer shall collect, take or receive gratuities left for an employee. An agent is defined as anyone who can hire or fire, supervise, direct, or control the acts of other employees. —As

In 2005, a letter written by then state labor commissioner Donna Dell spelled out which employees in the chain of service would be entitled to tips, including waitstaff, bus persons, bartenders, hostesses, wine stewards and front-room chefs—though Dell noted that the list was not all-inclusive. —As

Helene Wasserman, an attorney with the labor and employment law firm Ford & Harrison in Los Angeles, said: “The grayness comes with how you define a manager. In the Starbucks case, are these shift supervisors really managers or are they glorified baristas with other responsibilities?” —As

Starbucks officials said store managers and assistant store managers, because of their managerial duties, are not entitled to share in tips, and that customers do not distinguish between shift supervisors and baristas when leaving tips. —As

“That is why we disagree so strongly with the California Superior Court’s recent ruling that would not allow shift supervisors to receive what is rightfully theirs,” the company said in a statement. —As

The court, however, determined that shift supervisors, as the name implies, perform duties that disallow them from sharing in tips. —As

Though ordered by the court to stop its tip-pooling practices in California, Starbucks has requested a stay, pending its appeal, and company officials said the policy remains in place nationwide. —As

The question of duties is not the only sticky point at issue. Federal labor laws prohibit back-of-the-house personnel, such as dishwashers and line cooks, from participating in tip pools. Some lawyers question whether other kitchen-based workers, such as expediters, should be considered part of the tip-eligible front-of-the-house service chain. —As

Laura L. Ho, an Oakland, Calif.-based attorney representing plaintiffs in the Starbucks case in California, also is involved in a lawsuit in Texas charging Chili’s with violating federal law by allowing expediters to share in tips. That lawsuit contends that expediters, who typically oversee the plating of food but may sometimes run dishes out to the dining room, are not customarily tipped employees and therefore should not be entitled to share in gratuities. —As

Even employers who don’t involve themselves in their workers’ tip-sharing plans may be found liable, attorneys warn, because they may have difficulty proving that they had no knowledge of workers’ rules for sharing. —As

Anthony Zaller, a labor law attorney with Van Vleck, Turner & Zaller in Los Angeles, said Starbucks may have been targeted in part because tip jar contents typically are collected and held in a safe until the end of the week, when the money is divided up. “Because there was that much involvement alone could be a problem,” he said. —As

Some attorneys warn employers to avoid touching cash left for tips at all. If anything, employers should get involved in sharing plans only to ensure that rules aren’t broken, attorneys say. They also warn employers not to dictate amounts to be tipped out by servers, who customarily are not required to share more than 20 percent of their tips. —As

In the lawsuit filed in Minnesota’s Washington County, for example, the plaintiff alleges that Starbucks required employees to share tips even though state law prohibits employers from telling staff members whether or how to allocate such gratuities. —As

“One of the reasons the law exists is to prevent companies like Starbucks from using one employee’s tips to subsidize another employee’s wages,” said plaintiffs’ attorney E. Michelle Drake of Nichols Kaster & Anderson in Minneapolis. “We hope to recover tips that rightfully belong to the employees.” —As