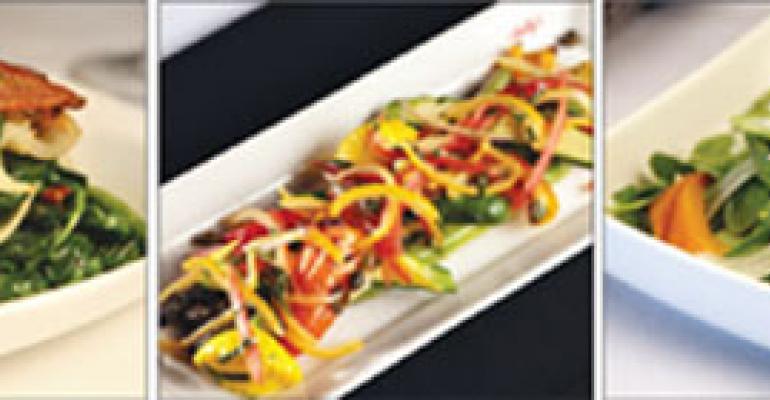 Just as a character actor might occasionally steal the scene from a star, the side dish is now stepping into the spotlight as one of the more interesting parts of a meal. For a category whose very name suggests that it might be an also-ran, spring’s side dishes bring a lot to the table, adding color, rounding out flavors and showcasing seasonal produce. And, in some fine-dining venues, adding a separate side dish category is being used as a way to give guests more choices while helping boost the bottom line.

“Sometimes what drove me as a customer to want to order an entrée would be the side dishes,” says Ellen Yin, owner of Fork restaurant in Philadelphia.

Even when she wasn’t in the mood for a particular center-of-the-plate ingredient, an intriguing side dish could often tip the scales in its favor. Consequently, Fork’s menu includes a separate side dish category, which often gives guests the chance to sample an accompaniment that may be paired with an entrée elsewhere on the menu.

Yin, who is also the author of “Forklore: Recipes & Tales from an American Bistro,” published by Temple University Press, estimates that about 30 percent to 35 percent of guests order a dish from the “sides” category, even though all entrées, which range from about $19 to $35 at dinner, include an accompaniment. She believes that pricing all the sides at $4 helps make people more open to trying things.

“Four dollars is pretty accessible,” she says, “so people don’t feel they’re taking a huge risk if they order it, and a lot of times people will get an assortment and share with the table.”

Year-round, Fork’s most popular side is yucca frites, made from the South American root vegetable.

“We shred them and then fry them to look like frites, and serve them with a spicy aïoli,” she says. “They’re kind of addictive.”

“We haven’t hit morels yet,” she says, “but right now in Pennsylvania, we can get trumpet mushrooms.”

Some restaurants have recently created a separate side dish category to create more affordable options for guests in a difficult economy. When Tony Sindaco, chef-owner of Sunfish Grill in Fort Lauderdale, Fla., revamped his menu in April, for instance, he lowered the range of entrée prices; in addition, the menu format changed from entrées each with a different accompaniment to entrées that come with standard “veg of the night” plus one choice from a new side dish menu category. Guests can order additional sides for $5-$7 each and may substitute any side dish for the “veg of the night.”

The idea behind the new menu format, “is to still give the highest quality food and service but with a value-added twist,” Sindaco says. “We’re addressing the times. The economy is terrible down here in Florida. The restaurant business is really tough right now.”

Sunfish Grill’s spring side dish list includes marinated grilled summer squash and zucchini. Sindaco tops a lengthwise section of each squash with slices of the contrasting color squash and garnishes it with red pepper relish. He also roasts fennel with olive oil, lemon, garlic and rosemary until it is well caramelized, then places it atop eggplant purée. A drizzle of eggplant syrup and a sprinkling of shaved Asiago completes the dish. Another Sindaco side pairs roasted tomatoes stuffed with Provençale breadcrumbs alongside spaghetti squash that’s roasted with Sugarman maple syrup.

On the opposite coast, Salty’s on Alki in Seattle has also recently added a separate side dish category to give diners more à la carte options.

“It’s been a huge success for us,” says chef Jeremy McLachlan. “With the oil prices and all this stuff, people don’t want to spend that much money.

“In a restaurant, the biggest killer is obviously the protein,” McLachlan adds. “We price the protein accordingly and then the sides dishes are pretty hefty side dishes for five bucks.”

Currently, McLachlan is offering a sweet-salty side dish of spring pea vines and corn sautéed with house-made bacon as well as a vegetable medley topped with a salad of preserved Meyer lemon.

“I love that preserved Meyer lemon flavor because it’s real salty and real acidic, and it kind of just wakes up your palate. It goes really well with vegetables. We put it on a lot of our fish dishes, also.”

Bay Voyage Inn in Jamestown, R.I., added side dishes, all priced at $6, also to make the menu more flexible for guests.

“You’re trying to figure out a way to get people in where they don’t feel like they’re spending a lot of money and breaking the bank,” says executive chef Michael Hervieux.

One of Hervieux’s most popular sides at the moment is grilled asparagus tossed in a dressing made with shallots, fresh lemon juice, Champagne vinegar and fresh herbs—perhaps thyme, rosemary or basil, depending on what he has on hand.

“You kind of get a ‘pop’ in the back of your mouth with the lemon juice and the Champagne vinaigrette,” Hervieux says, “and then the fresh herbs add a lot of flavor, too.”

Hervieux says all the sides are large enough for two to share.

At Annie Gunn’s in Chesterfield, Mo., chef Lou Rook has begun receiving the season’s first arugula, which he pairs for a side with roasted peppers, roasted shallots and olive oil. Chesterfield, located about 18 minutes from downtown St. Louis, lies within 30-40 miles of most of the farms that supply the restaurant’s produce.

“As things come on board,” Rook says, “we continue to try to build the products into our side dishes.”

Spinach also figures in a seasonal side prepared by executive sous chef Jason Shaffer at Opus at the Renaissance Hotel in Pittsburgh. He wilts the spinach in a warm pan, and then adds cooked lentils, crème fraîche and lemon zest. As of press time, Shaffer was expecting the imminent arrival of fiddlehead ferns, which he plans to lightly sauté in olive oil.

“I think once you become a spinach eater, you just crave it,” says Frank McClelland, chef at L’Espalier in Boston. At the restaurant, a popular year-round side dish is a gratin of spinach with blue cheese topped with panko breadcrumbs. For spring, McClelland is also offering a side of steamed asparagus topped with grilled ramps and crumbled chèvre, all sprinkled with a warm olive oil-lemon-garlic vinaigrette.

When it comes to asparagus, thicker is better, McClelland says.

“Its sugar content is higher, it’s sweeter, it has much more flavor,” he says. “I go for jumbo asparagus and I peel all my asparagus and it is scrumptious that way. I think people are confused. They think the pencil asparagus is elegant, which I guess it is. It’s cute, but it doesn’t nearly have the flavor of large asparagus.”

At Rathbun’s in Atlanta this spring ramps will make a side appearance in a simple sauté with a bit of lemon, says chef-owner Kevin Rathbun.

He also expects to add artichoke frites with smoked pepper raita to his side dish lineup.

Rathbun’s signature side, creamed charred corn and Gouda cheese, has such a following that he thinks there would be an uprising if the dish ever went off the menu. He sells it year-round, making it in the off-season with corn from Chile and Mexico, but he really looks forward to the arrival of fresh local corn.