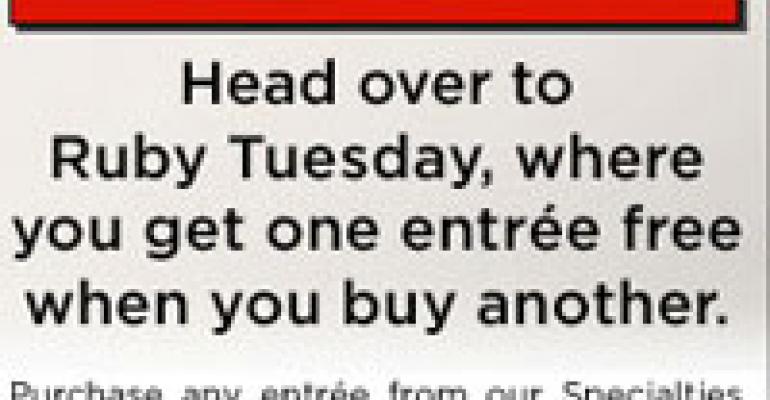 As chains look to hook customers with free food offers or two-for-one deals, the successes of these drastic campaigns are often difficult to quantify.

Some results, however, are trickling in.

Ruby Tuesday Inc., the operator or franchisor of 942 namesake casual-dining restaurants, debuted last week atwo-for-one entree promotion that according to one analyst could already have sparked an increase in guest traffic.

“While we tend not to place too much emphasis on wait times for one particular week,” Omohundro said, “we think that part of the increase in wait times for Ruby Tuesday may reflect the chain’s new promotion featuring a buy one entree, get one entree free offer.”

Omohundro surveys Friday night wait times at 300 restaurants under 13 casual-dining chains, and in his latest report that covers Feb. 20, Ruby Tuesday was the only chain to show an increased wait time from week to week. Customer wait times for Ruby Tuesday increased 10 minutes from the prior week to average 12 minutes in Wachovia’s latest survey. The chain’s average wait time throughout this current first quarter has been eight minutes.

The deal from Maryville, Tenn.-based Ruby Tuesday was publicized through e-mails to the chain’s regular customers and with newspaper inserts in various markets. It is scheduled to run through March 24 in almost all its corporate markets and most franchised regions.

Even if these free food promotions don’t spark profitable margin improvement, traffic increases are half the battle in today’s economy, many operators have said. As consumers dine out less and less, restaurants are fighting to keep customer traffic at all costs, hoping that when the economy improves, check averages will improve as well.

The promotion, which was available Jan. 19 through Feb. 14, gave any customer who purchased a dozen doughnuts 12 Valentine’s Day cards that each contained a coupon for a free doughnut. The chain’s heart-shaped and red- or pink-colored doughnuts were purchased in bulk on Feb. 13 and Feb. 14, the company said, with 400,000 doughnuts sold. Those two days were its most recent sales records.

The promotion was available at 100 locations throughout Winston-Salem, N.C.-based Krispy Kreme’s 520 units worldwide.

Even chains that have yet to offer deals have seen traffic increases when competitors are giving it away. In this week’s investor conference call at DineEquity Inc., chief executive Julia Stewart said IHOP sales increased on Feb. 3, the day that rival Denny’s offered a free Grand Slam breakfast to all customers. Denny’s said it served 2 million breakfasts that day and had called the campaign a success.

“The day this competitor gave away breakfast, IHOP sales were significantly up É and continued strong for the remainder of that week,” Stewart said. “I think this is a terrific example of the fact that no matter who talks about breakfast, whether it’s a direct competitor, whether it’s the quick-service players, it nearly always is a great thing for IHOP.”

While Stewart said that neither of Glendale, Calif.-based DineEquity’s brands -- IHOP and Applebee’s -- would engage in free food giveaways, IHOP completed on Tuesday its fourth annual National Pancake Day, which offers a free short stack of pancakes to customers. Those customers are then encouraged to donate what they would have spent to the National Pancake Day charities.

“We got preliminary result maybe an hour ago,” Stewart said Wednesday, “that said we were substantially up in traffic versus a year ago.”