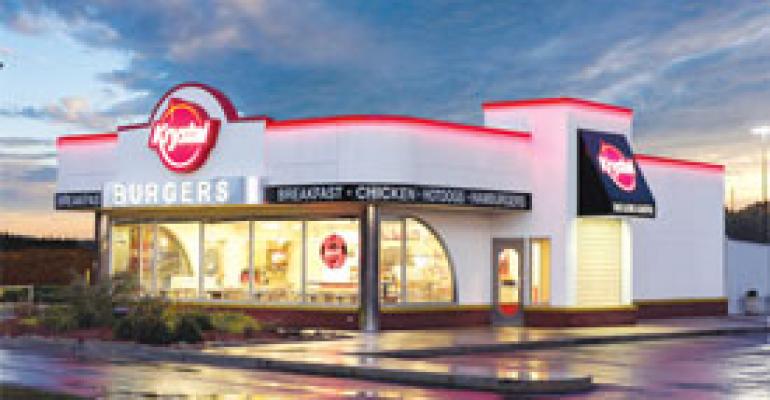 Here’s the scenario: You’re a burger chain in expansion mode using all the latest technologies, and young people who are passionate about the brand are clamoring to get their pictures on your packaging and in your advertisements. Sounds like a new up-and-coming chain, right?

Actually the chain is Chattanooga, Tenn.-based Krystal, which is celebrating its 75th birthday this year.

Krystal is among three chains based in the Southeast with milestone anniversaries in 2007. In addition, Atlanta-based Chick-fil-A will turn 40, and Charlotte, N.C.-based Bojangles Famous Chicken ‘n Biscuits will turn 30.

While all three concepts are decidedly different, each attributes its longevity to a loyal customer base and an unyielding focus on keeping their brands fresh and relevant.

Krystal chief executive Fred Exum, who grew up eating the chain’s small, square burgers, said that when he arrived at the company 10 years ago, he felt it was important to move the brand forward.

“Krystal in the past focused on value driven by price alone,” he said. “But value has two components: quality and price. So we worked to bring a quality image to the Krystal brand. You see quality driving the rise of fast casual, and that is the same thing driving our business.”

The first Krystal was built in 1932 in a 10-foot-by-25-foot prefabricated stainless steel and porcelain building. Fast-forward 75 years: Today there are roughly 410 restaurants in 11 states ranging in size from 1,600 square feet to 2,200 square feet.

Krystal still is expanding, particularly in Texas and more selectively in Florida, given increasingly prohibitive costs there. The company has reported three consecutive years of same-store sales growth, with gains of 6.4 percent in 2004, 4.6 percent in 2005 and 7.9 percent in 2006, officials said.

One step taken to improve the Krystal experience is having specially trained master cashiers in all company-owned stores and some franchised units.

“A customer judges his or her experience by the interaction with a cashier or a server, so our cashiers are trained to love the business,” Exum said.

In addition, in the last few years table service was added to many of the dining rooms. Since 70 percent of business comes through the drive-thru, systems to speed up delivery without compromising quality also are always being improved, Exum said.

Brad Wahl, vice president of marketing, noted that the Krystal burgers’ unique onion flavor is rather polarizing and has a very loyal customer base.

“You either like it or you don’t,” he said. “I’d rather be relevant to a polarized crowd. QSR foods tend to be bland and commodity-driven. Krystal’s is about as anticommodity as you can get. Lots of people have a passion for and crave our hamburgers. Sorry, but you don’t hear that about a McDonald’s hamburger.”

Exum’s team also has worked to upgrade the restaurants so they appeal to a more discerning diner, he said. Roughly 100 of the company’s 228 company-owned stores have completed the reimaging, which includes new exteriors, signage, freestanding tables and chairs, carpets, wallpaper, and lighting.

On the technological front, the company has offered free Wi-Fi Internet access since early 2003 and cashless payment systems since 2006. Krystal invested heavily in computer systems and cut costs so much that food and paper costs are five points lower than they were 10 years ago.

In January, the company opened its first Dine-In, Drive-In and Drive-Thru restaurant in Chattanooga. The unit, which pays homage to stores of the 1950s, has a 38-seat dining room, traditional drive-thru and a drive-in with carhop service. There is also in-vehicle Wi-Fi Internet access and a jumbo, three-panel menu and digital media board positioned directly in front of each parking space. The system’s average check of just below $6 is about $7 in re-imaged stores.

Success has been fueled by marketing efforts designed to actively engage Krystal’s loyal customers by making them the stars of its television commercials, placing their faces on packaging and honoring them in the Krystal Lovers Hall of Fame, officials said. The company also takes customers into its test kitchen to try new products and holds an annual Krystal Square Off World Hamburger Eating Championship, which this fall will be broadcast on ESPN.

Exum is a big proponent of company-owned stores.

“Since capital is so easy to get, I see no reason not to grow company operations, even to the extent of pulling back or ending new franchising,” he said. “Franchising doesn’t happen by itself. There are a lot of embedded costs, so it is not our focus going forward.”

Going forward, Krystal officials plan to target markets like Greenville and Spartanburg, S.C., as well as Texas, which the chain first entered two years ago.

“We want to make smart decisions, build restaurants that make sense and have happy customers,” Exum said. “People love to come in and tell us their Krystal stories, and for us, that’s what it is all about.”

Chick-fil-A was founded 40 years ago when founder and chairman Truett Cathy opened his first restaurant in the Greenbriar Mall, selling a boneless breast of chicken sandwich to shoppers.

The chain expanded across the country during the shopping center boom of the 1970s and 1980s, and now has more than 1,315 restaurants in 37 states and Washington, D.C. It eventually moved into standalone restaurants in addition to mall locations, and it has remained closed on Sundays since opening day. The third generation of the Cathy family recently opened their own Chick-fil-A stores.

Dan Cathy, company president and son of Truett Cathy, noted that customers have an almost cultlike loyalty to the brand.

“We’ve always had an insatiable thirst to grow, develop and innovate,” he said. “Our attitude is that if we are not evolving, over time we will begin to get complacent. We want to leave intact what we brought in, but also embrace new technologies and have it ready for the next generation.”

The biggest challenge now for Chick-fil-A is to continue to grow a small company rather than a big company, Dan Cathy said, explaining: “You can have a big $2.5 billion company or a small $2.5 billion company. We want to maintain our nurturing, friendly culture. We intend on keeping it small even though we may be twice the size in seven or eight years that we are now.”

Bojangles’ was founded in 1977 when Jack Fulk and Richard Thomas began selling hand-dipped Cajun chicken and other accompaniments. The concept changed hands multiple times while growing to 335 units by 1985.

Unfortunately, according to Tom Lewison, Bojangles’’ president and chief operating officer, mismanagement caused a retrenching that led to the shedding by the 1980s.

Today Bojangles’ is owned by chief executive Joe Drury—a CKE Enterprises veteran and former protégé of the late Dave Thomas, founder of Wendy’s—as well as a small group of investors.

The current Bojangles’ team went about rebuilding the brand by focusing on operations, Lewison said.

“It was never about the food because the food was always good, always fresh. In the 1980s we had wealthy groups running the stores, but it doesn’t mean a thing without the operations,” he said.

Officials have remodeled stores, embraced technology, added menu items, better trained employees to deliver consistent service and created the Bojangles’ Operating System, or BOS, a series of checklists, procedures and charts that balance out the fiscal needs of labor management and the service needs for customers.

Roughly 41 percent of sales are at breakfast, so a great deal of focus is spent on building business in that day-part through such measures as locating stores on the side of the street that gets the most inbound commuter traffic.

“We have been able to work on the operations because no matter how poorly the chain was run, it survived because the food was so good,” Lewison said. “Most QSRs cook food, but we prepare it.”

Not every strategic move has worked, however, Lewison admitted. For instance, Bojangles’ entered China in 2005, and though it “opened well,” he said, it fell down on execution.

“We will be back in China,” he said. “We are in Mexico and Honduras and have a handshake agreement with a group in the Middle East.”

Lewison said the goal is to dominate in any market where Bojangles’ does business.

“We want to grow wisely,” he said. “We want quality, not quantity. We are selective about our franchisees and just want a strong foothold in the markets [where] we do business.”

“We’ve had 12 consecutive quarters of rising company sales,” he said. “Everything has been up in a major way for several years now.”

Officials at all three companies say the largest challenge is people. while commodity, real estate and insurance costs rise, finding the people who want to work and sustain a career in quick service is a daily struggle, they said.

“McDonald’s has made more millionaires in this country than any other company, but nobody stops by the fast-food table at job fairs,” said Joe Dyer, a veteran Checkers franchisee who now owns two Bojangles’ franchises in the Savannah, Ga., area with three more in the pipeline. “That is a problem we all live with.”