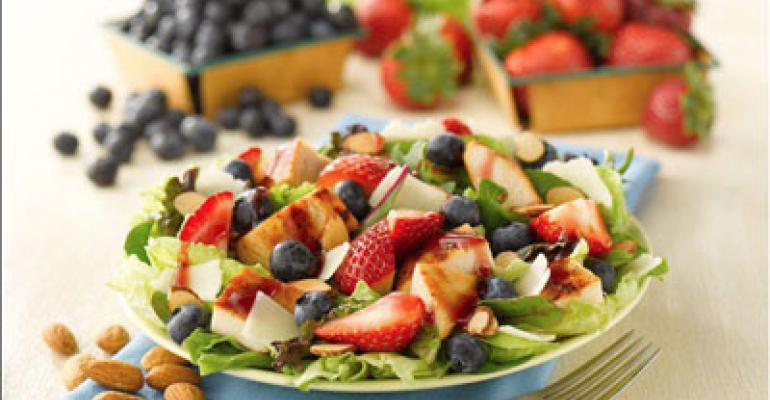 “Healthy options and portion variety are driving factors in today’s soup and salad menu positioning,” said Sara Monnette, Technomic’s director of consumer research. “Operators are revamping their menus in response to consumer demand for soup and salad as a standalone entrée, side substitution, appetizer or a component of a combo meal. There are many menu variations in which soups and salads are now offered.”

An interest in wellness is driving the gains in orders for soup and salad, Technomic found, as 78 percent of consumers who purchase salads more often say they're seeking a more healthful option, and 49 percent want something lighter.

Technomic found other notable trends for operators, including that soup and salad are the two most common appetizer options at both full-service and limited-service restaurants.

Fifty-three percent of respondents said the choice of dressing was the key component to a tasty salad, accounting for more responses than healthfulness or brand names for driving purchase intentions, Technomic found.

Soups and salads figure prominently in recent promotions and menu additions for several national chains. Olive Garden’s latest value offer, a $6.95 “Create Your Own” lunch special, combines either a soup or salad with unlimited breadsticks and one of six special entrees. Previously, the chain had offered unlimited soup, salad and breadsticks, also for $6.95.

Wendy’s has told investors that it would launch a new ad campaign in the second quarter that features a new seasonal salad. Last year, the quick-service chain put a Berry Almond Chicken Salad on the menu as a seasonal limited-time offer.

In a menu revamp that debuted March 19, The Cheesecake Factory began offering a Santorini Farro Salad and a Fresh Kale Salad.

Starbucks Coffee also made a move to branch into food offerings, including salads and soups, with the opening last week of its Evolution Fresh restaurant in a Seattle suburb. Salads reportedly cost about $8.25, and can be customized with add-ons like grilled steak or chicken, while soups range from $3.75 to $4.95.