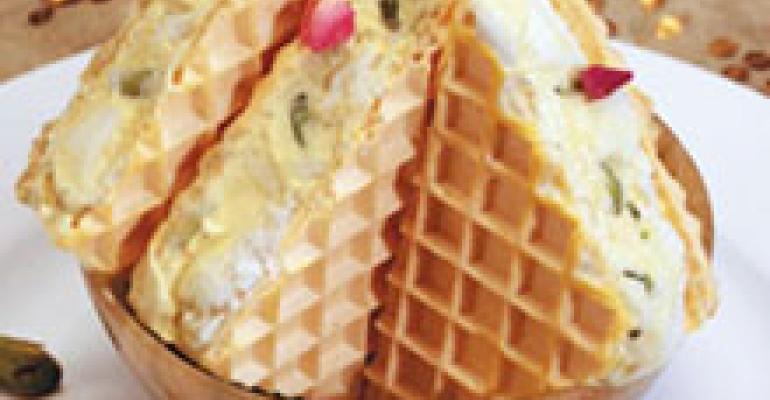 If you want to start an argument at an international gathering of chefs, just mention saffron and then stand back. The opinions will flow unabated.

During last fall’s Worlds of Flavor conference at The Culinary Institute of America’s St. Helena, Calif., campus, chefs from the saffron-producing nations of India, Iran and Spain traded barbs over which country produces the finest example of the world’s most expensive spice. Though passionate, the chiding was in good fun and educational for attendees.

In interviews after the conference, however, those same chefs were all business about the coveted spice, addressing its skyrocketing cost, its common mishandling in American kitchens, the importance of the culture surrounding it and the ever-increasing number of ways to use it in sweet foods.

In early December, just days after Spain’s saffron harvest ended, María José San Román, chef-owner of Monstrelle in San Fernando, Spain, warned that inclement weather there reduced the harvest to just one-fifth its usual size. The resulting scarcity, she estimated, would triple prices on world markets. Weather also harmed crocuses, the flowers from which saffron threads are harvested, in Kashmir, where the crop is 60 percent of last year’s take. In Iran this year’s harvest is about one-third of 2007’s haul.

“It was a horrible year all over,” said San Román, known in Spain as “The Saffron Lady” and author of “The Book of Saffron.” “There’s just not going to be enough to go around.”

People living in countries located along the Mediterranean, in the Middle East and South Asia can expect the saffron shortage to change the way they cook, said Najmieh Batmanglij, a Worlds of Flavor speaker, cookbook author and teacher in Washington, D.C. The delicate red threads are inextricably woven through the fabric of those cultures, she said, adding that it’s more a way of life than a mere ingredient.

“We cook so much with saffron, savory foods and sweet,” Batmanglij said.

The best, she insisted, comes from her native Iran.

“Middle Eastern food is very much ‘in’ right now, so I’m invited to teach a lot of French-trained chefs how to cook with saffron,” she said. “Many chefs here don’t understand how to use it properly, but they’re learning.”

Suvir Saran, a native of India and chef-owner of Devi restaurant in Manhattan, agreed with Batmanglij that American chefs commonly misuse saffron. But much of the blame, he added, should rest with fellow Indian chefs cooking in America.

“They have shown our cuisine in a bad light,” said Saran, who also spoke at CIA’s conference. “The handling of saffron isn’t very clear even to the greatest of chefs. There are many nuances.”

Saran, Batmanglij and San Román all said the most common misuse is tossing whole saffron threads directly into a dish instead of steeping them first in hot liquid to maximize color and aroma extraction.

“It will go so much higher on color, flavor and taste if you do that,” San Román said.

Though the saffron threads will be transparent after steeping, she strains them out before adding the infused liquid to other foods.

“We also dissolve it in oils or fats like ghee,” she said. “But while you’ll get very good flavor, you won’t get the color if you dissolve saffron in an oil.”

Saran is so sold on saffron’s gentle aromatics that he places strands of it, along with cardamom pods, bay leaves and cloves, in sacks of rice stored at his restaurant.

“The saffron you get from the Kashmir crocus has an intensity you can’t find anywhere…so I let it sit with the rice for months,” he said.

He also toasts dry saffron in a heavy-bottomed pot over a low flame, just until darkened, to deepen the flavor.

Jeff Jarfi, owner of Jarfi’s Bistro and Catering in Louisville, Ky., disagreed with his peers’ belief that American chefs mistreat saffron. A native of Morocco who immigrated to the United States 28 years ago, Jarfi watched his mother cook with whole threads of saffron, as well as steep it.

“Both ways are correct,” said Jarfi, who adds whole saffron to his most popular dish, sea bass, $25, which is pan-seared and sauced with a saffron beurre blanc. He also uses whole threads in his tagine-roasted chicken, $18.50, with preserved lemons.

American chefs “are cooking with saffron as good as, if not better than, chefs all over the world,” he said. “The new young chefs go the extra mile when they’re interested in ingredients like saffron, and they tend to use it in more creative ways when they do.”

Batmanglij is most encouraged by chefs wise to saffron’s virtues in sweet preparations. During the Worlds of Flavor conference, she demonstrated how to infuse rose water with saffron, while another chef baked quince in the fragrant liquid.

Najmieh Batmanglij believes the optimal way to extract flavor from saffron is to first grind the threads with a mortar and pestle, and then immerse the powder in hot water. Below is her formula.

In a jar combine 1 teaspoon of ground saffron to a quarter cup of hot water or rose water, between 130 degrees Fahrenheit and 150 degrees Fahrenheit. Vigorously shake the bottle, let the mixture rest 15 minutes, then use. Store refrigerated and tightly sealed.

She used saffron-rose water in all kinds of pastry, in cakes, puddings and ice creams, she said. Saffron’s sweetness is more easily evoked, she added, when paired with other aromatics.

“I make saffron omelets with rose petals, and it’s lovely,” she said.

On the menu at Devi are fennel-scented pancakes served with saffron syrup, cardamom ice cream and candied almonds.

“It’s a sugar syrup, so you want to add the saffron at the very end” when it’s cooling, Saran said.

“We make it ourselves, by hand, and without an ice cream maker,” Saldivar said.

He starts with sweetened custard and adds bourbon-soaked vanilla beans and Spanish saffron. After freezing overnight, the custard is partially thawed and the vanilla beans removed. The remaining mixture is then whipped with an emulsion blender and refrozen.

“We plate that with crushed pistachios, and it’s gorgeous,” he said.

Despite her nation’s love of paella, San Román uses Spanish saffron—“Of course, I think my country’s is the best”—predominantly in sugary applications, including her restaurant’s golden, saffron-infused marshmallows.

“Saffron goes with any dessert that has milk or cream,” she said. “I use it in crème brûlée, crème anglaise or panna cotta. I make a pomegranate ice cream with saffron: imagine the colors, the nice yellow and red.”