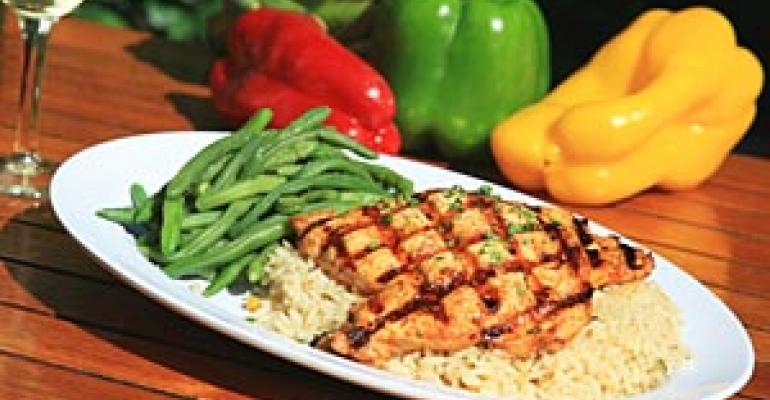 Good food fast is an elusive goal. Sonoma Chicken, a four-unit chain based in San Jose, Calif., claims to ace it with fast-casual service and a kitchen built for rapid scratch cooking of casual-dining-caliber fare. The fledgling chain aspires to grow by appealing to quality-minded dining patrons who don’t have time to waste.

Sonoma Chicken resembles other fast-casual restaurants in the way that patrons order and pay for their meal at a service counter and tote their own trays. But that's where the similarity ends. The dishes they bring to the table, like Lime Grilled Chicken in roasted chile and cilantro sauce, $9.99, and Grilled Mahi Mahi with pineapple pico de gallo, $11.99, are made with fresh, high-quality ingredients and more ambitious recipes than typical fast-casual fare.

Speed of service also is a major selling point.

"We absolutely can feed someone within 10 to 12 to 13 minutes from the time they walk in," said chief operating officer Mark Carter. In contrast, lunch in a casual-dining restaurant can take 45 minutes and dinner an hour, according to the 25-year casual-segment veteran.

Fast-casual service puts the guest in control of the meal, Carter also observed. For example, there's no waiting for the check after eating because it's paid up front. "That's what really sets us apart from casual-dining restaurants," he said. "The food and pricing are very similar."

Founded in 2002, the chain is preparing a franchising push beyond its California borders. It hopes to open three or four new stores in the next several months, including one in Parsippany, N.J. Ready to roll out is a brand-new, 5,000 square-foot, 150-seat prototype which Carter said is capable of producing $3 million in annual sales. Looking ahead, 21 franchised stores are already projected, including multiple units in New Jersey and New York.

The Sonoma Chicken cooking battery would be at home in a high-volume, full-service restaurant, according to Carter. Producing Roost-tisserie Chicken, priced $9.99 for half and $7.99 for a quarter, is the job of a multi-spit gas rotisserie oven. It allows chickens to be loaded and removed continually to yield a flexible supply of fresh, hot birds. It cooks as many as 64 chickens per hour, which helps drive the best-selling item on the menu. It represents 10 percent of the menu mix.

In addition, a number of dishes touch the grill, fryer and saute stations. Skillet Chicken Carbonara, which accounts for 5 percent of the menu mix, has deep-fried chicken breasts sautŽed in garlic cream sauce with bacon served over rice. The sauteing is done on an eight-burner range that also turns out the likes of Chicken Coop Marsala and Seafood Pasta.

Grilled items are popular too, like Grilled Salmon Risotto, Top Sirloin Steak, and wine-marinated Grilled Artichoke. They are prepared on a 36-inch gas grill perched atop achef base.

Poised for an important role in the new prototype is a dual-deck conveyor oven. One deck will be set to bake 10-inch pizzas in five minutes, Carter said, the other to prepare hot sandwiches in two and a half minutes.

Handling the frying output, mainly Crispy Calamari and the seasoned fries that accompany several entrees, is a double-well fryer with a built-in filtering unit that helps maintain oil quality.

Given the amount of fresh food it handles, the kitchen requires plenty of refrigeration. Thus there are refrigerated drawers in the chef bases under cooking equipment. The appetizer and sandwich stations have refrigerated make tables. Meats and prepped items are kept in separate walk-in coolers.

Franchisees like that Sonoma Chicken's server-free dining rooms spare them front-of-house staffing headaches, Carter said. "Food servers are so hard to train and manage, not necessarily because of the people, but because companies expect them to do so much," he said. "But we've done away with that."

The cost saved in the front is invested in kitchen labor and equipment, important for a concept that Carter called "prep heavy," meaning that it requires special processes and lots of set up to maintain its speed and quality.

"A number of items are precooked slightly to ensure that we can get them out quickly," Carter said. "The average guest would never know that. They just know they're going to get their food in five or seven or nine minutes and it will be great."