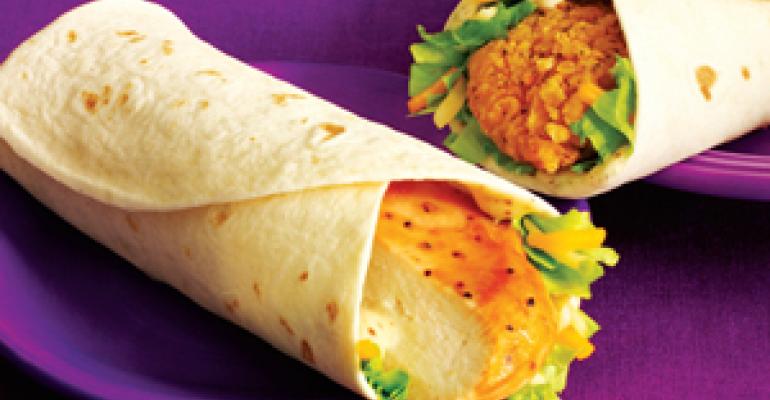 The growing trend could be seen as a quick-service corollary to the upscale-dining sector’s proliferation of small-plates alternatives, whose lower price points often inspire higher overall tabs, restaurateurs say.

Although definitions of snacks can vary, fast-food analysts characterize them as impulse buys that are low-priced, portable and aimed at building checks without cannibalizing sales of core menu items. Snacks typically are priced between 99 cents and $2, though some run as high as $3.

Major quick-service chains saw snack purchases in mid-afternoon and late-night periods increase by a record 6 percent last year, compared with 2005 volumes, according to a consumer study by the NPD Group, a Port Washington, N.Y.-based research firm.

Another report, by Business Insights, forecasts that snacking occasions will increase 3.6 percent from 2004 to 2008.

The newly released 2007 Snacking Category Report by Chicago-based Technomic Information Services found that consumers consider almost any food item a snack if it’s of a certain size and price. The study concluded that growth opportunities exist for both limited-service and full-service operators to expand their snack offerings.

Though snacks are a relatively new idea for some chains, others have been augmenting their mealtime menus with snacks for decades.

“Snacks are definitely a growing category and another opportunity for quick service to expand its menus,” said Maria Caranfa of the Chicago-based Mintel Menu Insights research firm. She cited time pressures that plague many of today’s consumers as giving impetus to the trend and noted that snacks must be handheld and portable to feed the needs of motorists who eat in their cars.

Caranfa credited KFC with introducing what proved to be one of the most successful of the new generation of snacks when it rolled out its first Snacker sandwich about two years ago. The 99-cent line’s newest version, the Buffalo Snacker, is a double-breaded, deep-fried chicken strip dipped in spicy Buffalo sauce and topped with shredded lettuce on a warm sesame-seed-topped bun.

KFC and McDonald’s have done the most aggressive promotions of their snack lines, Caranfa said.

McDonald’s executives said last summer’s launch of the Ranch Snack Wrap, a deep-fried chicken strip rolled in a soft flour tortilla with cheese, iceberg lettuce and ranch dressing, was one reason for the chain’s 6.9-percent domestic same-store-sales spike in December, along with strong sales of premium chicken sandwiches and breakfast items.

The chain’s line of $1.29 burrito-style snacks in January grew to include two versions of the new Honey Mustard Snack Wrap, one with a grilled chicken strip and the other with a deep-fried strip. The wraps and the Warm Cinnamon Roll augment other bargain-priced snacks, such as the Fruit & Walnut Salad, Apple Dippers and the Fruit’n Yogurt Parfait.

“As the eating habits of people change and snacking becomes a way of life for many consumers, McDonald’s is committed to offering our customers more portable, high-quality food options that fit their needs,” said Don Thompson, president of McDonald’s USA.

McDonald’s is selling another wrap, the Salsa Roja Snack Wrap, in select major markets, including Los Angeles, San Diego, Houston and Phoenix. The chain would not comment on whether the Mexican-style item—featuring a sauce of fire-roasted tomatoes and jalapeños, with onions, cilantro and a touch of lime—could become a national item.

Compared with KFC’s standard sandwiches, the smaller portion size of the items in the chain’s Snacker line has proved to be attractive to women who are watching their weight, according to KFC’s focus group research. Women surveyed by the chain said they especially like the nonfried Honey BBQ Snacker for both themselves and their children, citing health and obesity concerns.

One-third of all Snackers sold are eaten on the go, such as in the car, a KFC spokesman said, while 56 percent are eaten for a light lunch. Also, many customers buy the combo meal of two Snackers, potato wedges and a 32-ounce soft drink for $3.99.

Arby’s, which has offered its “Sidekickers” since the 1990s, sells those items both with meal mainstays, such as sandwiches, and as à la carte offerings during slower time slots, said Ed Gleich, the chain’s senior vice president of concept development. Flavor and portability are important sales criteria for selling such items, including Loaded Potato Bites and Jalapeno Bites with Bronco Berry Sauce, he said.

Currently promoting Loaded Potato Bites with bacon, Cheddar cheese and chives, Arby’s has positioned the item, first introduced in 2005, as a portable version of a stuffed baked potato.

“It did so well we put it on our core menu in March 2006 and promote it from time to time to keep awareness of it,” Gleich said.

Cheese is often a component, if not the main ingredient, in quick-service snacks. Several chains, including Arby’s, Jack in the Box, White Castle and Sonic, sell mozzarella sticks. Sonic also offers Ched ‘R’ Peppers and Ched ‘R’ Bites, both with ranch dressing.

All Culver’s restaurants sell Cheddar cheese curds. Long a popular snack in cheese-producing Wisconsin, Culver’s home market, cheese curds are gaining a wider audience since 360-unit Culver’s expansion out of its Upper Midwest region to its current total of 14 states.

San Francisco-based Jamba Juice has increased its baked-goods snack offerings in recent years to include the Pizza Protein Stick and the Cheddar Jalapeno Twist.

“Jamba definitely sees the food and snack item category as an area of opportunity in the future and has future innovations planned,” a spokeswoman said.

White Castle, which has been selling its value-priced miniature burgers since 1921, more recently added a variety of additional snacks, including breaded and fried chicken rings and Fish Nibblers, which are bite-size pieces of white fish with tartar sauce.

Citing the chain’s signature Slyders, White Castle spokesman Jamie Richardson said, “We were ahead of the curve.”

He added that snacks are more relevant today than ever because of consumers’ busier lifestyles.