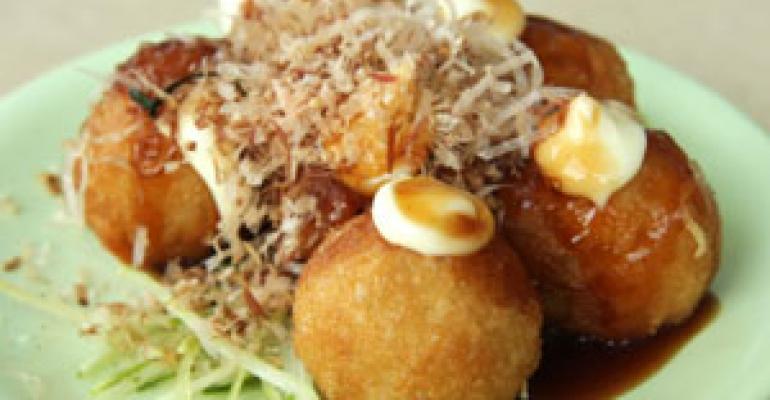 Smoke, paprika, fine flours, ricotta and specialty fats are among the 2011 food trends that are heating up as restaurateurs head toward the second quarter of the year, a Seattle research firm said Thursday.

“Chefs are infusing everything from cocktails to duck fat to shrimp with aromatic smoke,” said Melissa Abbot, director of culinary insights at Hartman Group Inc. in Seattle, who provided an overview of the hottest themes on menus during a webinar entitled “Progressive Food Trends”

“We’ve been tracking key elements in the food world that go way beyond what we have come to know as trends and making note of products and behaviors through the lens of food culture,” Abbot said. “This helps differentiate between what’s a fad and what’s likely to be a long-term food behavior.”

• Smoke has wafted into all nooks and crannies of the menu as consumers become more conscious about their meat consumption. “Boosting the flavor of non-meat dishes becomes really paramount,” Abbot said.

“The primal flavor of smoking delivers a taste that meat eaters and meat-reducers often miss,” she said. “Smoked ingredients are showing up as smoked bread, of all things, at San Francisco’s Commonwealth restaurant to cold smoked grapes at Compose in New York City.” She also mentioned Spur in Seattle, a gastropub where a smoked yogurt is the base for a panna cotta.

“It’s natural, earthy, smoky, fruity and it’s described by people as being like vegetarian bacon,” she said.

• Finer flours are becoming popular. Double-zero flour is especially sought after on forward-leaning menus. Abbot said double-zero “is the finest grind of flour you can get in Italy. Traditionally, it’s used in making everything from pizza to panettone.” It’s in such dishes as fettuccine with chanterelles at Table Six in Denver, she added.

“It’s an indication of specialty flours and grains being on the rise,” she said. “Look for greater focus on how all types of grains are being milled.” Chefs can look at locally stone-ground wheat, finely ground flours of rye and buckwheat and corn meals.

• Ricotta is becoming the hot dairy product, Abbot said. “It’s become the go-to ingredient for elevated comfort food,” she noted. “It’s really honest and super versatile.” Ricottas range from the hand-dipped version made with Hudson Valley milk at Salvatore Brooklyn in New York to sheep’s milk ricotta at Wayfare Tavern in San Francisco, she said. And interesting preparations include the ricotta pancake with orange syrup at The Breslin in New York City.

• Duck fat is this year’s bacon, Abbot added. “From a culinary perspective, duck fat is pure magic,” she said. “From a health perspective … it contains a high percentage of mono-unsaturated fat and it’s actually closer in composition to olive oil than butter or even lard.” The high smoking point provides cooking at higher temperatures without burning. Lush Wine Bar in Chicago creates its bar popcorn in duck fat. And Michael Mina at Bourbon Steak in the Fairmont Scottsdale Princess in Arizona does a trio of individually spiced fries cooked in duck fat.

“Beyond duck fat, expect to see more novel fats on menus,” such as lard and beef tallow, Abbot said. “As long as the fat is well-sourced it’s all good. And in small doses, it can actually be really good for you.”

• Basque small-plate pintxos. “Pintxos have a really strong socializing component,” she said. “It’s not just about the snack and the food; it’s about being together.” (RELATED: Ruby red shrimp pintxo and other previews of spring NYC menus at C-CAP event)

• Takoyaki, a hand-held dumpling wrapped around octopus from Japan.

• Meatballs, the red-sauce “Italian joint staple” is being presented with higher quality ingredients, such as those at The Meatball Shop in New York City and a high-end version at A16 in San Francisco. (RELATED: Classic meatball sees recession revival)

• Oysters, which are becoming even more popular for being lower in calories and capitalize on the source of the shellfish, Abbot said. “Look for more ingredients that foster the sense of terroir, from local watersheds and chefs that skillfully highlight their subtle flavors,” she added.

• Low-brow chicken, whether it is found in a Vietnamese version at Pok Pok Pu in Portland, Ore., a buttermilk-saltine crust at Hill Country Chicken in New York City or fried with spiced honey at Resurrection Ale House in Philadelphia. “Occasional fried food does feed the soul,” Abbot said.

• Pop-up restaurants will extend to pop-up menu items, Abbot said. The popularity of guerrilla-style restaurants like chef Ludo Lefebvre’s LudoBites in Los Angeles are leading non-moving restaurants to offer limited-time items within an evening, such as the special burgers after 10 p.m. at Holeman & Finch in Atlanta. “Pop-ups create the notion of a fleeting food experience via culinary hunt, encouraging the consumer to shift the desire to the top of their to-do list,” Abbot said.

• Nordic foods, which have been a beacon at Noma in Copenhagen, will show up more American menus, Abbot said. She suggested looking at Ikea’s food section, which has such items as lingonberries and elderberries, as well as open-face rye sandwiches with “funky” cheese and piquant mustard.