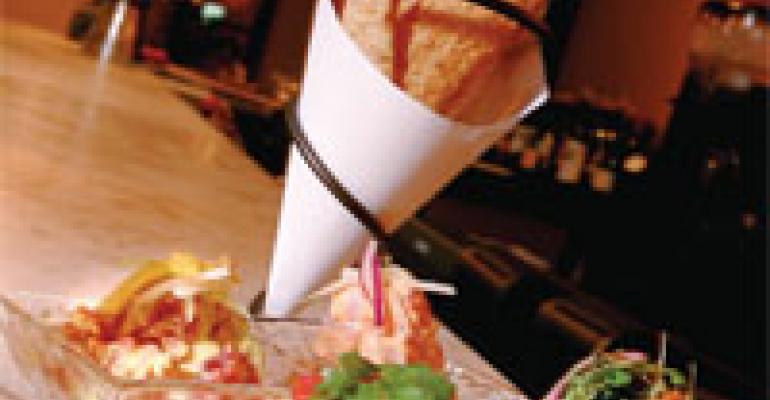 More than half of restaurant sales growth over the past year came not during breakfast, lunch or dinner, but in the middle of the afternoon, according to NPD Foodworld.

With sales flat at lunch and dinner, restaurants are finding ways to get customers in the door during the rest of the day.

Josh DeChellis, chef-owner of BarFry, a restaurant in New York that focuses on tempura, recently started offering free “bar bites” from 4 p.m. to 6 p.m. and from 11 p.m. to closing. Items like tuna tacos, beignets with chicken liver mousse and endive, and shrimp with gumbo oil have had an effect on business.

“To say ‘drastically’ would be an understatement,” DeChellis says.

He was inspired by the tapas of Granada, Spain, where “every time you order a drink, you get a little bite.”

At Shelly’s Tradizionale, also in New York, the inspiration is Venetian cicchetti. Similar to tapas, and also free, items include fried olives, chickpeas or cauliflower, assorted breads, and olives.

“It’s going terrifically,” says owner Shelly Fireman. “How could it be unpleasant? Soon in ten years the whole world will be free, everybody loves it so much.”

But food need not be free to be loved.

Anne Burrell, the chef of Centro Vinoteca in New York, offers what she calls “piccolini” because she wished something like that were available at all restaurants.

Meaning “little things,” piccolini are intended for the beginning of a meal when you see your friends and want to catch up and just want to nibble on something before actually contemplating dinner.

The tables are set with piccolini menus so they can be ordered immediately, and a separate station in the kitchen, with two cooks, is devoted to them so the items can be sent out quickly. The items offered include white-bean purée with prosciuto, stir-fried marinated olives, and Parmigiano-crusted fried cauliflower served with a mixture of bread, garlic, olive oil and vinegar called agliata.

One of Burrell’s favorites is her mortadella pâté, made by puréeing the meat, folding in whipped cream and topping it with pistachios.

Ceiba, a Latin-theme restaurant in Washington, D.C., recently converted the front of its restaurant to a lounge area with “soft” seating, where people can have drinks and small bites. Chef-owner Jeff Tunks has designated a cocktail and drink special each weeknight from 2:30 p.m. to 7 p.m.

On Monday the theme is Cuban—a mojito and a Cubano sandwich. Tuesday is a Brazilian caipirinha with chorizo and chimichurri. Wednesday is Peru day, with a pisco sour and ceviche.

Thursday features Sangria and tapas of the chef’s choice, while Friday showcases Mexican flavors, with margaritas, guacamole and salsa. Each drink-snack combo is $5.

Chalkboard in Chicago has formalized afternoon snack time the way the British have, with tea. Recently launched on Saturdays from 2 p.m. to 4:30 p.m., the service is $19 for a pot of tea, finger sandwiches, scones and pastry—$12 for children under 12. A glass of Champagne can be had for $15, or other sparkling wine for $8.

Simposio in Houston just rolled out a late-night snack menu.

“The food that was selected was low-maintenance and easy to eat in the bar and lounge, and doesn’t create the need for all the utensils, napkins and water,” says general manager Stephen Kennedy. That includes items like bruschetta with mozzarella and pesto, cheese plates, mini pizza, and grilled polenta with mixed wild mushrooms. Prices range from $6 to $8.

Alan Popovsky, the owner of Hudson in Washington, D.C., recently added a late-night menu, lasting until 1 a.m. on weeknights and 2:30 a.m. on weekends to serve the customers at the neighboring upscale hotels who get out of meetings or arrive off of late-night flights in search of something to do.

“There’s so many people out there that are in the midst of getting themselves from one place to another late at night, particularly in these hotels,” he says. “Giving them the opportunity to go out instead of getting room service is really important.”

The menu has some of the greatest hits from his dinner and lunch menus—omelets, pizza, salad—and he says that for the area he “corners the market on what people are looking for” to eat at night.

He cuts the kitchen staff after dinner from seven people to two, so the items have to stay simple, but business is good.

Belcourt in New York offers an “oyster hour” between 4 p.m. and 5 p.m. It’s a scaled-back menu that allows the restaurant to stay open while giving the kitchen a chance to change from lunch to dinner operations.

“People do come in, and we don’t want to turn them away, not from a monetary sense, but because we want people in the restaurant,” says executive chef Matthew Hamilton. “We let them have a snack, and a lot of them stay for dinner.”

Oyster hour features food and beverage pairings, such as half a dozen oysters with a glass of Muscadet for $16, or a lamb burger with India pale ale for the same price.

DeChellis of BarFry sees other intangible benefits to giving people snacks. He says seeing the enthusiasm of his customers gives him a “little extra kick in the hiney” to develop new items so as not to bore his regulars.

“It’s easy to embrace because it genuinely makes them happy,” and it helps to stimulate his creative side, he adds.