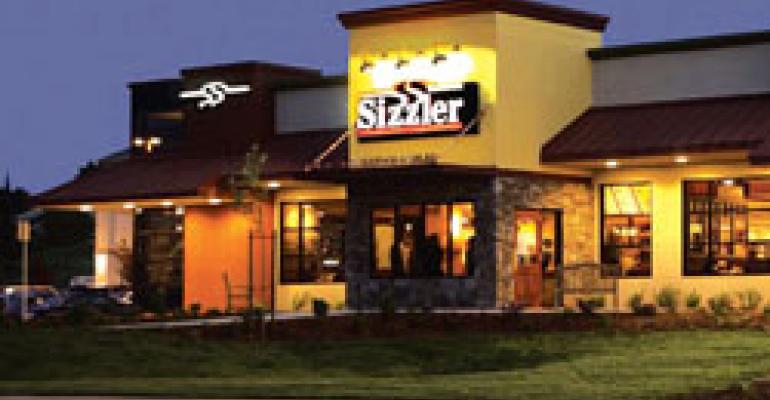 CULVER CITY CALIF. Sizzler, operator or franchisor of more than 300 limited-service grill and salad bar restaurants worldwide, is for sale, and Ken Cole, its U.S. president and chief executive, is stepping down to lead the casual-dining Quaker Steak & Lube chain. —

A sale of the chain, which has restaurants in 17 states, Puerto Rico, Australia, Japan, Korea, Taiwan, Thailand and China, is expected within six months. Sizzler has 223 U.S. locations. It plans to debut in Mexico later this year. —

The chain has evolved away from its traditional grill-buffet format in recent years while retaining its signature salad bar and moderately priced steak, chicken and seafood as well as limited beer and wine offerings. Newer branches reflect more of a casual-dining look and ambience while retaining a counter-ordering system. Sizzler last year said a Las Vegas franchisee intended to test a full-service, full-bar variant, while another test would study a limited-menu express model. —

Since the buyout of Worldwide, Sizzler’s management “has rein-vigorated company properties and operations and greatly improved profitability while reigniting the franchise community and mapping a new path for the brand,” said Rob Koczkar, PEP’s managing director. “With such a strong foundation now in place, Sizzler can be better guided by a partner with more experience and presence in the U.S. market.” —

PEP last year said it was seeking a buyer for San Diego-based Pat & Oscar’s, which has 19 fast-casual branches in Southern California. —

Officials said Cole’s resignation, effective Feb. 22, was unrelated to the planned sale. Since joining Sizzler in 2001, he has maintained a residence in his home state of West Virginia, and the move to become president and chief executive of Sharon, Pa.-based Quaker Steak & Lube marks a “return home,” he said. —

Quaker Steak & Lube, whose 29 motor-sports-theme casual-dining restaurants in 10 states are known for their chicken wings, said Cole would focus on expansion after joining the company Feb. 25. —

The chain “is now at the point where Ken’s vast experience and knowledge will be extremely helpful in growing both our company and franchised restaurant base,” said board chairman Michael J. Stack. —

During the past 18 months, Quaker Steak & Lube added 10 restaurants, and it plans to grow by another eight this year on its way toward a goal of having 50 branches by the end of 2009. —

Cole, who has led Sizzler for the past seven years, previously was chief executive of Blue Chalk Cafe Corp., parent of the Left at Albuquerque chain, and of Damon’s International, operator and franchisor of the Damon’s Grill brand. —