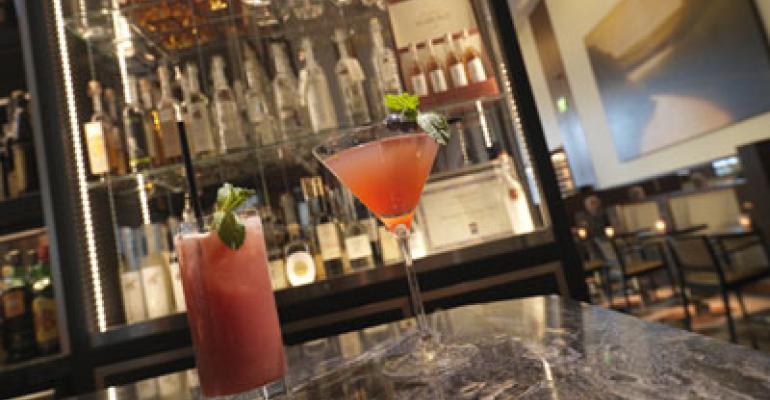 From the Manhattan restaurant that’s an altar of agave to the San Francisco hotel bar that lionizes grappa, operators across the country are making a splash by specializing in a particular distilled spirit.

Beverage insiders attribute the emergence of the single-minded bar to a convergence of factors: the plethora of fine spirits on the market, the growing knowledge and passion of contemporary mixologists and a public enthralled with high-end liquors and creative cocktails.

“Now more than ever we’re seeing these varietal kind of bars,” said New York City-based beverage consultant Tad Carducci. He noted that the trend gained steam some years ago when single-malt scotch became popular and is being driven now by the artisan cocktail culture.

Bar 888 in the InterContinental San Francisco Hotel showcases more than 120 kinds of grappa, the aromatic and potent Italian distillate made from the pomace, or grape residue, left from winemaking. Wine director and beverage manager Amy Currens explodes the myth that grappa is Italian for firewater. Her list is dotted with smooth and complex expressions from leading Italian producers. Styles range from elegant young grappas born of white grape varietals to bolder expressions made from red varietals with barrel age.

Agood way to introduce neophytes to grappa is with a specialty cocktail like the Italian Mojito, Currens said. It combines honey- and lemon verbena-infused grappa with the muddled fresh mint, lime juice, sugar and soda of the typical mojito. The grappa snuggles up with the other ingredients, yet its heady character shines through. “It is really hard to cover up grappa,” Currens added.

Several other InterContinental properties have spirits-centric concepts as well, like the InterContinental Boston. It is home to RumBa, a bar with 100 rums and a Champagne list to boot and Sushi-Teq, a cocktail and sushi bar with 69 tequilas.

“By concept alone, this sets us apart,” said hotel spokesperson Stephanie Loeber, adding that it helps attract a young professional clientele. Of course, there have always been bars with lots of bottles. But forward-looking operators focus on quality rather than quantity.

“In the early 90s, a tequila bar was a gimmick to sell margaritas that were mass-produced with sour mix,” Carducci said. As a partner in the six-unit Mercadito Restaurants group based in New York, he is the curator of large tequila lists himself.

Operators who are passionate about the spirit transform it into uniquely crafted signature drinks, he said, rather than sickly sweet margaritas. Of similar mind is Philip Ward, mixologist and partner in Mayahuel, a Mexican restaurant in New York City with extraordinary tequilas and mezcals.

“There are bars that have 150 tequilas, but there aren’t 150 good enough for me to carry,” said Ward, who has about 60 tequilas and 15 mezcals. Mezcal, like tequila, is derived from the agave plant, but it has a singularly intense, smoky character.

Ward limits the other spirits at the bar to a handful of whiskies and gins: “Our approach is to offer what others don’t.” An example is the Loop Tonic, a cocktail of blanco tequila, dry vermouth, green chartreuse, celery bitters and lime juice that’s a far cry from the typical happy-hour margarita.

“I feel flattered by people trying to imitate us, but none of those places have achieved the collection we have,” Gamlin said. He likes to suggest distinctive brands such as ones from Poland and Ukraine as alternatives to mass-marketed vodkas.

At Rum Bar in Philadelphia, owner-mixologist Adam Kanter has introduced many locals to new rums with his 160-item rum list, which including scores of sipping rums and inventive cocktails.

“When we opened three years ago, there were fewer than 100 rums available here,” Kanter said. “We’ve gotten a lot of quality rums placed in the state and other bars have started picking them up. Now I see a lot of bars with 10 or 15 different rums, which is really impressive.”